Notice: amp_is_available was called incorrectly. `amp_is_available()` (or `amp_is_request()`, formerly `is_amp_endpoint()`) was called too early and so it will not work properly. WordPress is currently doing the `pre_get_posts` hook. Calling this function before the `wp` action means it will not have access to `WP_Query` and the queried object to determine if it is an AMP response, thus neither the `amp_skip_post()` filter nor the AMP enabled toggle will be considered. It appears the theme with slug `publisher` is responsible; please contact the author. Please see Debugging in WordPress for more information. (This message was added in version 2.0.0.) in /home/runcloud/webapps/techilive/wp-includes/functions.php on line 5313
 Eels outplay Warriors in six-try win - TechiLive.in 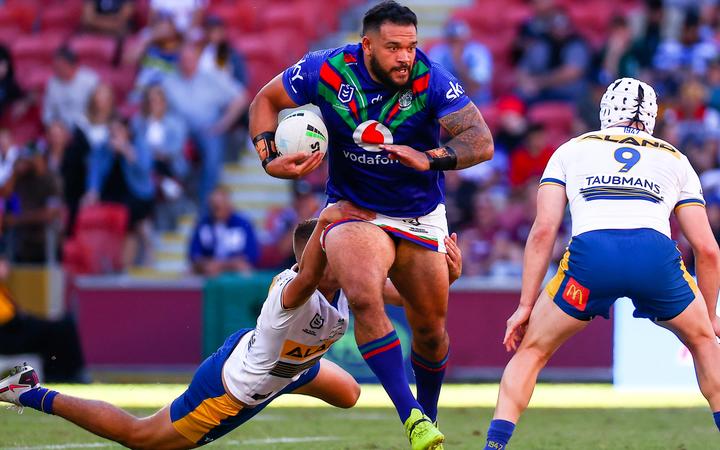 The Warriors have fallen to their sixth loss of the season, outplayed 34-18 by the Parramatta Eels in Sunday’s 10th round NRL clash in Brisbane.

The second-placed Eels were unstoppable right from the first whistle, and all but had the game won when they powered out to a 24-0 lead after 20 minutes.

The Eels were camped in Warriors territory early, halfback Mitch Moses stepping through the defence to set up Nathan Brown for the first try after just five minutes.

Maika Sivo double the score after 13 minutes after some slick Eels ball movement got the powerful flanker one-on-one against winger Rocco Berry.

A Reed Mahoney crash ball helped Reagan Campbell-Gillard to a rare try in the 15th minute, and the prop had an unlikely four-minute brace soon after when he backed up a clean break from Moses to step his way to the line.

At 24-0 after 20 minutes the game looked all but over, but the shellshocked Warriors rallied somewhat and bench forward Josh Curran got his side on the board when he cleaned up an attacking Chanel Harris-Tavita bomb to make it 24-6 at halftime.

The Warriors slipped further behind shortly after the break when Eels debutant Jake Arthur – son of coach Brad Arthur – collected a Moses bomb and fed it out for the back-rower to cross, but again the Warriors rallied.

The Warriors lost Curran to an elbow injury early in the second half and Berry to an HIA late in the first, with teen sensation Reece Walsh injected into the backline.

No-try rulings against Matterson and Blake Ferguson, each ruled to have lost the ball over the line, helped their cause before Ben Murdoch-Masila crashed over then an evasive run from Walsh evaded the Eels defence to get it back to 28-18 with 15 to play.

Arthur was impressive in his debut, making his tackles reliably and kicking well while playing a valuable supporting role.

He wrapped the Eels win with their sixth and final try, producing a big show-and-go to seal the win inside the final five minutes to the instant delight of his teammates.

Denial of responsibility! TechiLive.in is an automatic aggregator around the global media. All the content are available free on Internet. We have just arranged it in one platform for educational purpose only. In each content, the hyperlink to the primary source is specified. All trademarks belong to their rightful owners, all materials to their authors. If you are the owner of the content and do not want us to publish your materials on our website, please contact us by email – admin@techilive.in. The content will be deleted within 24 hours.
Loading...
AudioCurrent AffairsEelsNewsnews updateoutplayPodcastsPublic Radio
0
Share