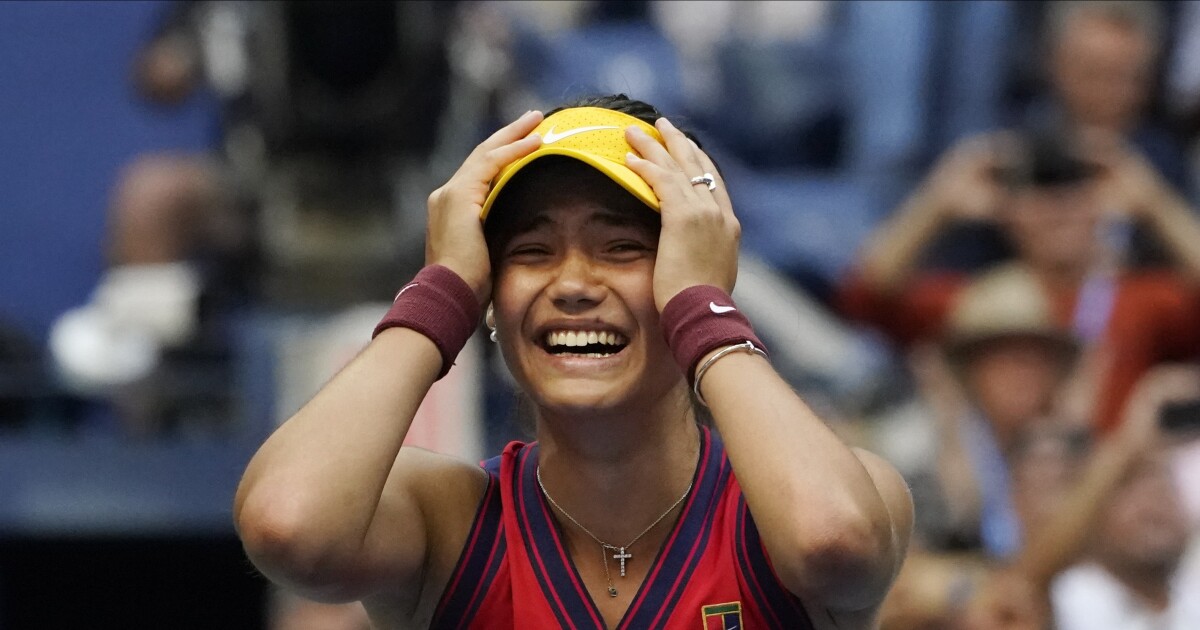 Emma Raducanu came to New York with big dreams but a realistic travel itinerary. Unsure of her chances of getting through a qualifying tournament and earning a berth in the main draw of the U.S. Open, the 18-year-old from London had scheduled a flight back home after qualifying and before the main action was scheduled to begin.

Raducanu, 18, will leave the U.S. Open as a champion and the star tennis didn’t know it needed so urgently.

Raducanu, the daughter of a Chinese mother and Romanian father, didn’t lose a set in three qualifying matches or seven U.S. Open matches as she won the first matchup of unseeded players in a major final since tennis’ Open Era began in 1968. Ever poised and precise, she defeated 19-year-old Leylah Fernandez of Canada 6-4, 6-3 in the first pairing of teenagers in a major final since 17-year-old Serena Williams defeated 18-year-old Martina Hingis in the 1999 U.S. Open.

Raducanu was relaxed enough after her triumph to join fans in singing along to “Sweet Caroline” as she awaited the trophy ceremony at Arthur Ashe Stadium. She is the first British woman to win a Grand Slam final since Virginia Wade won Wimbledon in 1977 and she was dominant: no opponent won more than four games against her during her run at the U.S. Open.

“Thank you all for making me feel at home from my first qualifying match,” Raducanu told the crowd. “I hope that me and Leylah put on a good performance today.”

Fernandez acknowledged her defeat would be hard to digest. However, “I’m very proud of myself and the way I played the last two weeks,” she said.

Referring to being in New York on the 20th anniversary of the 9/11 attacks, she added, “I hope I can be as strong and resilient as New York has been the past 20 years.”

The first few games of the opening set created a high standard and a promise of drama to come.

Raducanu, after holding serve to start the set, went up a break in the second game by converting her sixth break-point opportunity. But Fernandez broke right back, cashing in on her fourth break point of the game after Raducanu netted a backhand from the baseline. They produced several rallies that were long and entertaining, drawing applause from fans at Arthur Ashe Stadium.

The set continued to go on serve until Fernandez served at 4-5. Raducanu gained four set points before finally ending the set on a forehand winner. That kept alive her streak of not having lost a set in the U.S. Open main draw. Equally remarkable was that she had not let any opponent win more than four games in any set.

Raducanu began the second set by holding service easily and she had three break points on Fernandez’s serve in Game 2. But Fernandez didn’t bend, and she held serve. She followed that up by gaining three break points in the third game and getting the break and a 2-1 lead when Raducanu sent a backhand into the net.

It was no surprise, given the evenness of the matchup and how both women have responded to pressure before this, that Raducanu responded in the next game to get the break back and level the set at 2-2. She then held for 3-2, punctuating the final point with a fist pump.

With her forehand working well and finding the lines, Raducanu quickly asserted herself in the sixth game and got two break point opportunities. She got the break and a 4-2 lead on her second try, on a passing shot. She then held for 5-2, testing Fernandez’s resilience and patience.

Raducanu had two championship points in the eighth game but hit a backhand wide the first time and netted a forehand the second time. Fernandez held serve and then earned a break point on Raducanu’s serve in the ninth game, but Raducanu called out the physiotherapist and requested a medical time-out. Raducanu had skidded while playing a deep ball and appeared to have scraped her left knee enough to draw blood. A gauze pad was placed on the wound and taped just below Raducanu’s knee.

Denial of responsibility! TechiLive.in is an automatic aggregator around the global media. All the content are available free on Internet. We have just arranged it in one platform for educational purpose only. In each content, the hyperlink to the primary source is specified. All trademarks belong to their rightful owners, all materials to their authors. If you are the owner of the content and do not want us to publish your materials on our website, please contact us by email – [email protected]. The content will be deleted within 24 hours.
DefeatsElliottEmmaFernandezLeylahnews updateOpenqualifier
Share