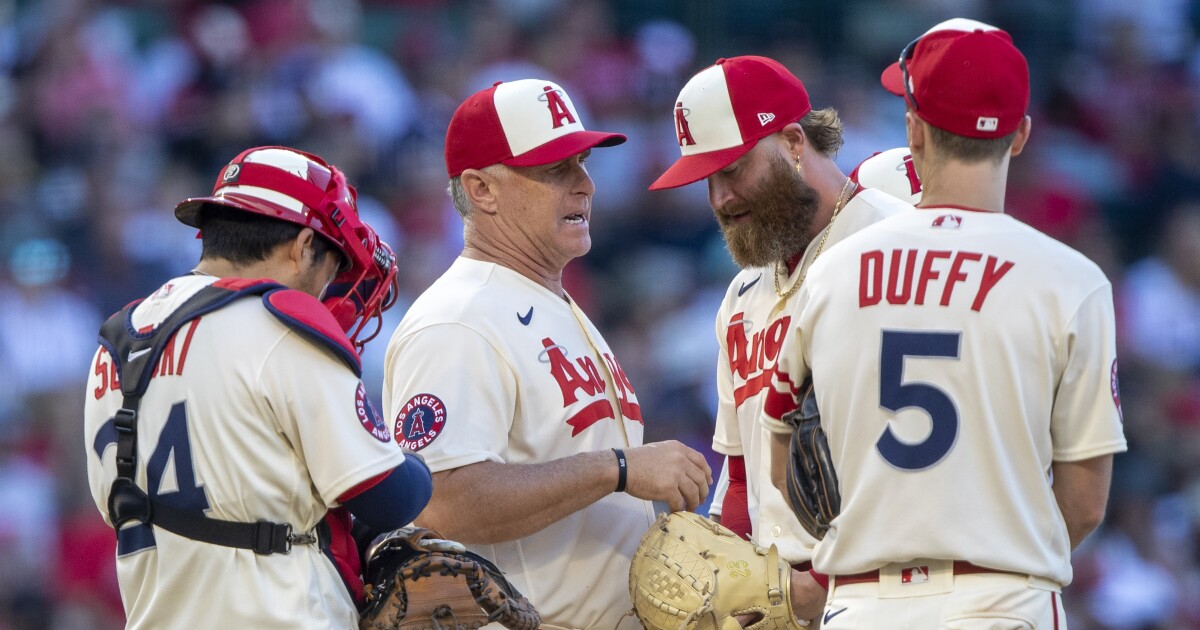 Elliott: If the Angels really are a ‘special group,’ they need to go out and prove it

On Tuesday, his first day as the Angels’ interim manager, Phil Nevin was asked a question he should have been able to answer without thinking: Where would two-way star Shohei Ohtani be hitting in the lineup?

Nevin, still caught up in a whirlwind of emotions after he was asked to succeed Joe Maddon and turn around a sinking team, didn’t have an answer. “I was like, ‘Oh, I gotta make a lineup,’” he said.

At least Nevin has gotten that part of the job down.

“I’m not forgetting to make the lineup now, like on Tuesday,” he said before the Angels’ 4-1 loss to the New York Mets on Sunday in front of an emotionally divided crowd at Angel Stadium.

The lineup he put together Sunday after Ohtani requested a rare day off mustered only two hits, both singles, after putting together a four-hit first inning and scoring a run against Mets right-hander Taijuan Walker. What appeared to be a carryover of the good hitting vibrations the Angels had created during an 11-6 mauling of the Mets on Saturday fizzled out, lost in the shadows that overtook the field Sunday during a game that started at 4:08 p.m.

They couldn’t hit what they couldn’t see, the Angels said after striking out 10 times against Walker and six more against Seth Lugo and Edwin Díaz in losing the second of three games against the National League East leaders. The Angels went down in order in the second, fifth, sixth, seventh and ninth, with the Mets retiring 16 of the last 18 Angels batters.

The Mets dealt with the same shadows and pounded out 11 hits, though they did strike out 11 times against Angels starter Patrick Sandoval and four relievers. “The game’s completely different if we score more in that [first] inning,” Nevin said almost wistfully.

Nevin is 2-4 as Maddon’s replacement, confirming that Maddon wasn’t the only problem for a team that peaked at 11 games over .500 (24-13) on May 15 and was 27-17 before swooning into a club-record 14-game losing streak. The occupant of the manager’s office is different but the personnel is the same, with the many strengths and many weaknesses that encompasses.

They’re probably somewhere between those extremes. They’re 3½ games out of the third wild-card position, so a run to a playoff spot that shouldn’t even exist remains possible. Nevin said players are still confident in their abilities, but at some point they’ll have to turn that confidence into wins.

“Taijuan’s a really good pitcher and we had really good at-bats all day. It’s just tough. That’s just baseball. And good thing is we’ve got another one not [Monday] but the next day.

“This is a special group. I’ve been saying that from Day 1, and you’re going to hit rough stretches. We’ve got 100 more games left so there’s no panic in this room from these guys and like I said, we’re a real special bunch.”

Nevin said Thursday’s win over Boston, almost singlehandedly won by Ohtani with a seven-inning, one-run pitching performance and a two-run home run, was important to end the losing streak. “But it’s the next one that you’re kind of waiting for. If we can rattle off a couple after having that streak … We get a sense of normalcy back,” he said.

That normalcy is getting closer with the return of key players who were injured, including Mike Trout (groin tightness) on Saturday, Anthony Rendon (wrist inflammation) on Friday and possibly Taylor Ward (hamstring) on Tuesday when the Angels open a two-game series against the Dodgers at Dodger Stadium.

“You get back to that structure in your lineup and that structure in your clubhouse and then you tack on a couple wins as this is happening, certainly does a lot for the psyche of the room and for the manager,” Nevin said. “Each day goes by you get more structure and your conversations get a little different. ‘OK, going forward what’s best for us?’ As they were earlier but now you kind of have more understanding of what the routine is.”

Losing has become routine too, and it shouldn’t.

“I think we’re a lot closer to the team we were in the first month of the season than we were during the losing streak,” said infielder David Fletcher, who’s still recovering from adductor muscle surgery.

“The first month we had, I don’t think was a fluke. I think it was pretty real, and that’s how we feel about it. … It was a significant amount of games, so I don’t think you play that well for that period of time if it’s a fluke kind of thing.”

It’s Nevin’s job now to prove their excellent start wasn’t a fluke. That will be tougher to do than write out and deliver a lineup card.

Denial of responsibility! TechiLive.in is an automatic aggregator around the global media. All the content are available free on Internet. We have just arranged it in one platform for educational purpose only. In each content, the hyperlink to the primary source is specified. All trademarks belong to their rightful owners, all materials to their authors. If you are the owner of the content and do not want us to publish your materials on our website, please contact us by email – [email protected]. The content will be deleted within 24 hours.
AngelsElliottGroupnews updateprovespecialsports newssports update
Share