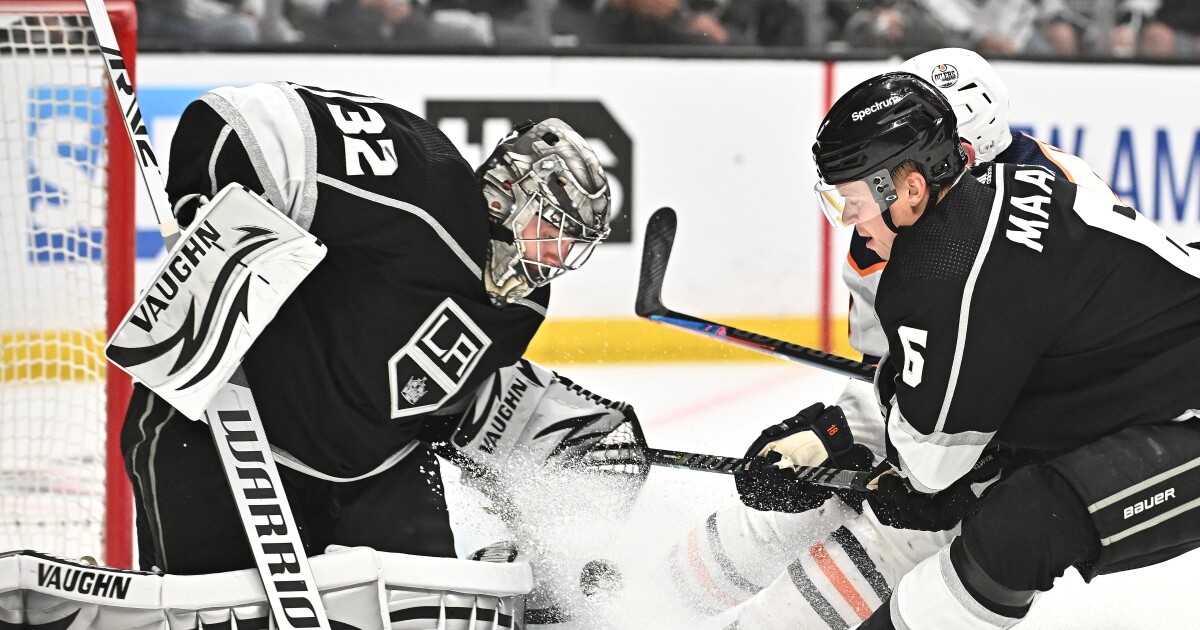 Being thumped by a flashy opponent early in a first-round Stanley Cup playoff series, as the Kings were flattened in losing their second and third games against the Edmonton Oilers by a cumulative 14-2, wasn’t anything new for them.

The 2014 Kings faced a worse situation after they lost the first two games to San Jose by a combined 13-5 and the first three by an aggregate 17-8. After a better performance in an overtime loss in the third game, then-coach Darryl Sutter said he saw signs it wasn’t the end for his team but the beginning of an opportunity to show their staunch character.

They didn’t go away until they had the Cup in their arms. They gained life and confidence while the Sharks froze in the moment, helping the Kings to become only the fourth NHL team to erase a 3-0 deficit in winning a best-of-seven postseason series. That dramatic reversal launched them on a long and sometimes perilous path to their second championship in three seasons.

The Sharks’ coach in that series was Todd McLellan. Now in his third season as the Kings’ bench boss, he gave them the tools for a series-tying comeback by making several lineup changes on Sunday that were key factors in their 4-0 victory over the Oilers at Crypto.com Arena. Goaltender Jonathan Quick made 29 saves for his 10th postseason shutout and first since 2014, sending the series back to Edmonton for Game 5 on Tuesday even at two games each and ensuring there will be a sixth game at Crypto.com Arena on Thursday. Both players McLellan brought into the lineup made significant contributions, with defenseman Troy Stecher scoring a goal and winger Carl Grundstrom scoring twice, the second time into an empty net.

Asked if he had seen hints that the Kings might stage a historic rebound in that 2014 series — and whether that experience might be of use to him now — McLellan initially pleaded forgetfulness.

“Yes and no. I have a tough time remembering what I did last week, never mind going back a decade,” he said Sunday after the team’s morning skate in El Segundo.

McLellan made two lineup changes Sunday, taking out rookie defenseman Jordan Spence in favor of Troy Stecher, and scratching winger Andreas Athanasiou to instead play Carl Grundstrom. Stecher was paired with Alex Edler and Grundstrom was moved up to the second line, alongside Phillip Danault and Trevor Moore.

Alex Iafallo moved to the top line with Anze Kopitar and Adrian Kempe. Viktor Arvidsson remained out because of an undisclosed lower-body injury.

To compete on a closer footing with the Oilers the Kings had to stay out of the penalty box so Edmonton’s power play—which converted five of 11 chances in the first three games—couldn’t pad its success rate.

Trying to control the tempo also was vital, because the Kings can’t win by trading chances with the speedy Oilers.

“We’re better when we check. We find a way to defend and get chances through that, but we got away from that a little bit and obviously ended up costing us the last two games,” Kings defenseman Mikey Anderson said after the team’s morning skate.

“You can get roped into it. The way they like to play, they take more chances than we do. And obviously when things aren’t going great, it’s easy to get derailed from it. We’ve done a good job all year when we’ve been down to find a way to claw back but doing it within our structure. That’s something we want to get back to, if we go down a goal or two, is to look at what we’ve done the whole year and the games we’ve come back from and try and emulate that again.”

To McLellan, it’s a matter of getting back to the hard-working identity they established this season in earning their first playoff berth since 2018.

“When I say we have to get back to our game, our game is also making decisions that are precise and instant. Not in between,” he said. “You play in between against that team, you’re done.”

The Kings did everything on Sunday they said they’d have to do, setting a brisk tempo and dominating play while scoring twice in the first period. They even got a goal from a defenseman for the first time in the series.

Winger Trevor Moore scored his second goal of the series on a slick backhand pass from Phillip Danault, who had created havoc in Edmonton’s end, giving the Kings the lead at 8:03. Stecher, making his series debut, increased the margin to 2-0 with a shot from above the right circle that struck the stick of Edmonton defenseman Duncan Keith and caromed past Mike Smith at 14:03, while the teams were skating four-on-four. Quick preserved the lead with saves on Leon Draisaitl and Brett Kulak in the closing seconds of the period. Quick was equally impressive in the second period, during one sequence making a blocker save after his glove had fallen off in the frantic action.

Grundstrom scored the Kings’ final goal, at 15:06 of the third period, after being upended and pushed into the net. The call withstood a video review.

Instead of leaning on all they’d done wrong, McLellan emphasized what they’d done right during the season and in the mostly miserable second and third games.

“It wasn’t all bad,” he said. “There was some good things, some changes that we wanted to make and we saw some of the things evolve during the game that we thought were positives. There’s a checklist of things that actually came out of an 8-2 loss on the positive side. Because we adapted a little bit. Obviously, we have to keep the puck out of our net, or it doesn’t matter.”

First team to four wins is the only number that really matters.

Denial of responsibility! TechiLive.in is an automatic aggregator around the global media. All the content are available free on Internet. We have just arranged it in one platform for educational purpose only. In each content, the hyperlink to the primary source is specified. All trademarks belong to their rightful owners, all materials to their authors. If you are the owner of the content and do not want us to publish your materials on our website, please contact us by email – [email protected]. The content will be deleted within 24 hours.
ElliottgamegoalhappyJonathanKingsnews updateOilersQuick
Share

Career Transitions You Can Make in Your 40s and 50s