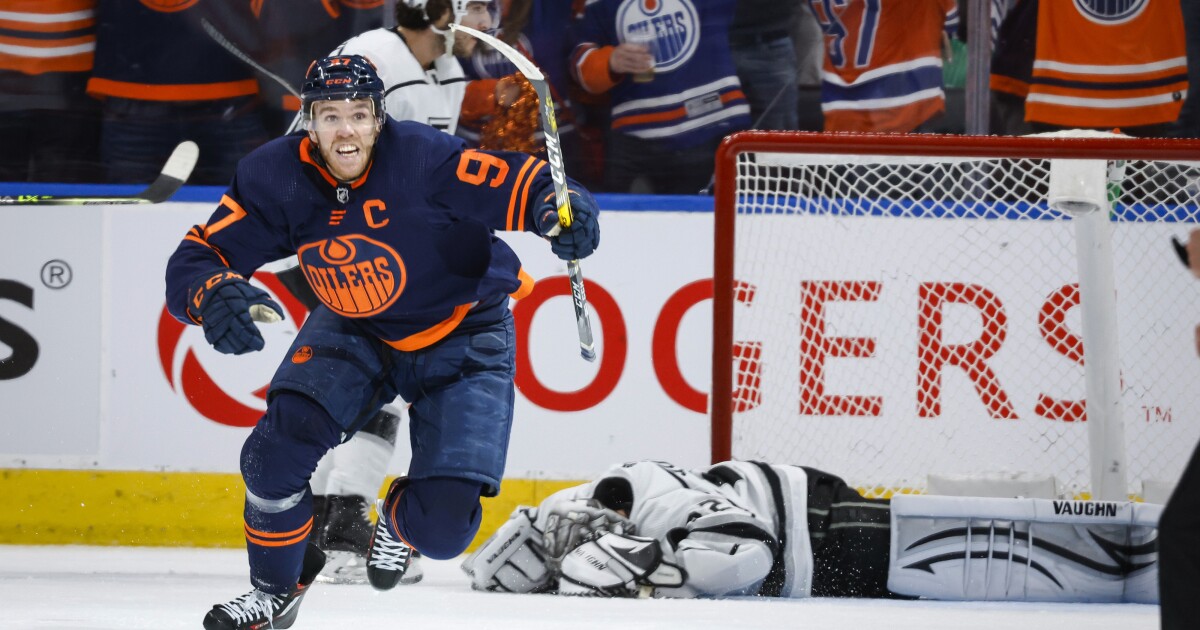 Anze Kopitar’s eyes were suspiciously watery. He rubbed them more than once as the finality set in that the Kings’ season had ended.

After seven games of a wildly back-and-forth Stanley Cup playoff series between the Kings and the Edmonton Oilers, the margin of difference between going home and going to the second round proved to be agonizingly narrow. Edmonton defenseman Cody Ceci scored from the right circle at 13:15 of the second period on setups from Connor McDavid and Leon Draisaitl, and McDavid provided an insurance goal with a slicing backhand at 16:07 of the third period as the heavily favored Oilers emerged with a jitter-inducing 2-0 victory on Saturday at a raucous Rogers Place.

The Oilers will face the winner of the Calgary-Dallas series, which will be decided in a Game 7 on Sunday in Calgary. The Kings will begin to work on a newly promising future, but one that will require upgrades and reassessments at many positions in order for that promise to be transformed into triumphs. “Next year, starting tomorrow, is going to be one tough year,” Kings coach Todd McLellan said.

The Kings, who haven’t won a playoff series since they won the Cup in 2014 for the second time in three seasons, were left with regrets that they won’t get to continue a journey this season that they alone believed they could ride to a successful finish.

They couldn’t close out the superstar-driven Oilers in Game 6 at home on Thursday. They had no offense against the formidable and determined forces of the Oilers on Saturday. Goaltender Jonathan Quick kept the Kings in it until the end, making 39 saves, but his teammates couldn’t give him any offensive support.

“Right now it’s very frustrating, obviously. The series was hard-fought. We gave it all. We should be proud of that,” Kopitar said. “I think there’s certainly an element of growth within the group throughout the season, even throughout the playoffs. It didn’t go today and it’s extremely frustrating because we came in here believing that we can get it done, and we didn’t.”

The game was the NHL finale for Kings forward Dustin Brown, who announced he would retire at season’s end. The captain of their 2012 and 2014 Cup teams, he came to personify the hard-hitting teams that earned the precious right to have their names engraved on the Cup. “I’m going to miss him a lot,” Kopitar said, his voice choking up.

McLellan saw the loss on two levels. “I think there’s small picture/big picture. Small picture, we’re disappointed. We, I on behalf of the group, said we’re in this to win it. We weren’t just coming here to gain experience,” he said. “And when you’re all in and you want to win and you don’t it’s disappointing. There’s a lot of water-filled eyes in there, grown men that are feeling that way, and that’s because we were all in. And it stings right now.

“Now, there’s the other side of the coin, where the organization four years ago came up with a plan about transforming the team, changing the way we play, the identity of the group, bringing younger players in, relying on the older players, and that was the positive throughout the year.”

The Oilers have been building toward a championship since they chose generational star McDavid in 2015, the fourth time in six years they’d landed the No. 1 overall draft pick. But something always held them back from being competitive, let alone being great.

Sometimes it was weak goaltending. Other times, a leaky defense. Most often it was a thin supporting cast around four-time NHL scoring champion McDavid and 2020 scoring champion Draisaitl, their No. 2 center. Coaches came and went and little changed, so the pressure mounted. They know champions in Edmonton — they watched the Wayne Gretzky-led dynasty of the 1980s — and they weren’t getting championship-caliber hockey anymore.

This year’s team was flailing until Jay Woodcroft replaced Dave Tippett as coach on Feb. 20. With better structure they finished fast, getting strong goaltending from Mike Smith — who made 29 saves for the shutout on Saturday — and otherworldly exploits from McDavid as they sprinted five points ahead of the Kings and landed second in the Pacific Division.

That the game was scoreless after one period favored the light-scoring Kings. Even after Ceci’s goal, the Kings had some chances. “It is one shot away,” Kopitar said, “but we couldn’t get sustained pressure.”

Phillip Danault, whose signing last summer gave the Kings terrific depth at center — and whose skills made better players out of every linemate he was given — said he felt a lot of pride in the team getting this far.

This experience can help their young players and invigorate some of the veterans. As painful as it was for the Kings to lose Saturday night and end a season they were sure should have gone longer, they will have better days ahead if they use this experience the right way, as a motivator and a launching pad for longer playoff runs. The series was not lost, but not all was lost for them.

Denial of responsibility! TechiLive.in is an automatic aggregator around the global media. All the content are available free on Internet. We have just arranged it in one platform for educational purpose only. In each content, the hyperlink to the primary source is specified. All trademarks belong to their rightful owners, all materials to their authors. If you are the owner of the content and do not want us to publish your materials on our website, please contact us by email – [email protected]. The content will be deleted within 24 hours.
bidBrownDustinElliottemotionalfarewellgameKings
Share

Just bought a new Samsung Galaxy? You will be shocked by what it’s now worth

Star kids on the block