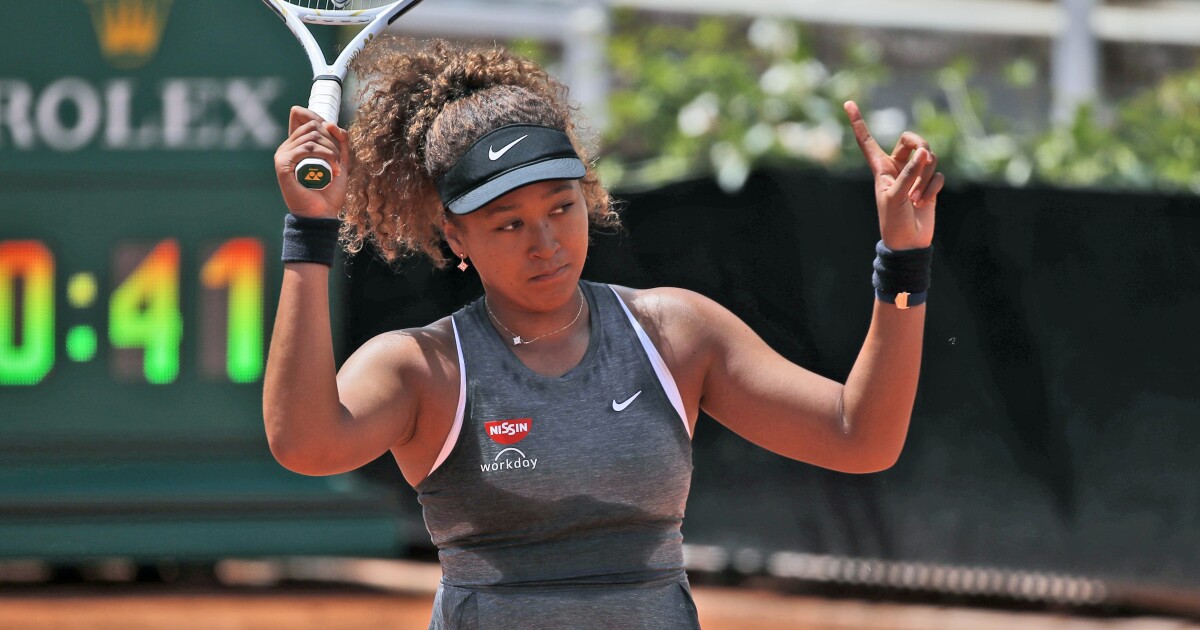 She needs empathy, not iron-fisted Grand Slam tournament executives threatening to bar her from tennis’ most prestigious events.

Osaka’s disclosure she has suffered bouts of depression since she defeated Serena Williams in an emotionally charged 2018 U.S. Open final blew wide the prison doors for those who endure mental health issues in silence for fear of being judged weak or flawed if they reveal their struggles. Her withdrawal from the French Open on Monday and her decision to step away from competition for an unspecified amount of time were strong declarations she’s ready to start healing, a tough but necessary step.

“I think now the best thing for the tournament, the other players and my well-being is that I withdraw so that everyone can get back to focusing on the tennis going on in Paris,” she said.

Osaka acknowledged she could have been more precise when she said last week she would skip post-match news conferences because past questions had inflamed her self-doubts. That didn’t seem reason enough for such a dramatic, rule-breaking action; other players said they had faced unpleasant or repetitive questions but consider news conferences valuable for promoting the sport and staying connected with fans.

By saying she has battled depression, Osaka provided crucial context for her decision and turned the discussion of athletes’ mental states in a new and healthier direction. It’s not a sign of weakness to seek help for stress or anxiety. It’s a sign of strength, and it demands respect.

“I never wanted to be a distraction and I accept that my timing was not ideal and my message could have been clearer,” said Osaka, a four-time Grand Slam event singles champion. “More importantly, I would never trivialize mental health or use the term lightly.”

Her conversations with the media generally have been reflective, her humility charming. “Though the tennis press has always been kind to me (and I wanna apologize especially to all the cool journalists who I may have hurt), I am not a natural public speaker and get huge waves of anxiety before I speak to the world’s media,” she said. At the French Open, she said, “I thought it was better to exercise self-care” and skip post-match interviews. She offered to help tournament organizers find ways to improve post-match interview rules “when the time is right.”

No tennis player casually gives up a chance to win a Grand Slam tournament even if it’s played on a surface — clay — that has given her trouble. Each of the last five French Open women’s champions was a first-time winner. The second-seeded Osaka might have extended that to six in this unpredictable world. It’s better that she’s taking care of herself and not stretching her frayed emotions.

If her initial statement was incomplete and her timing was off in issuing it a few days before the French Open began, those mistakes were compounded a million times over by people who should know better.

After she was fined $15,000 for skipping the news conference following her first-round victory over Patricia Maria Tig on Sunday, top executives of the Australian Open, French Open, Wimbledon and the U.S. Open issued a joint statement saying additional missed interviews would subject her to heavier fines and the possibility of being defaulted from the tournament or suspended from future Grand Slam events. It was heavy-handed and ominous. Calling it sexist and condescending isn’t a big stretch.

“The Grand Slam statement just threw flames on it in a major way,” said Pam Shriver, who was one of tennis’ greatest doubles players and now does commentary for ESPN. “For them to throw the threat out there that she could be defaulted was so insensitive and tone deaf. … When it comes to someone’s health, until you know the full facts, it was almost careless.”

Shriver understood Osaka’s mention of the 2018 U.S. Open as the trigger of her depression. Osaka, then a 20-year-old up-and-comer, was jeered by fans who wanted to see Williams win and match Margaret Court’s record of 24 Grand Slam tournament singles titles. When Williams got into a verbal dispute with chair umpire Carlos Ramos, the crowd backed Williams and booed when Osaka triumphed. A shaken Osaka apologized for winning.

“The way she handled it, we were all in such admiration. That was the biggest trauma in tennis except for the tragedy that happened to Monica Seles,” Shriver said, referring to a fan’s on-court stabbing of Seles in 1993. “To win your first major under those circumstances, that seems like an understandable start time to have those problems.”

Osaka’s woes weren’t visible, but they were real. “For an athlete, when you have a physical injury, there’s usually a timeline. There’s a diagnosis that comes with a timeline to get better,” Shriver said. “Depression and mental illness and your mental health, it’s a whole different arena of health matters.”

Shriver is the mother of three teenagers, two of whom experienced mental health issues during the COVID-19 pandemic. So have many other young adults. Shriver can understand how Osaka would be among that number — and how she can become a role model in getting better. “Young people connect with Osaka, and young people, I think teenagers who have struggled, I think they’re going to connect even more because she’s come out openly now about her mental health, naming it depression,” Shriver said. “I think for a lot of young people, it’s the epidemic that’s commingling with the pandemic.”

Shriver also said she doubts Osaka will play at Wimbledon in late June. “She shouldn’t compete until she feels healthy in all ways, until she gets some things straightened out,” Shriver said.

Osaka needs time and understanding, not condemnation and fines. Tennis is better when she’s competing.

Loading...
Denial of responsibility! TechiLive.in is an automatic aggregator around the global media. All the content are available free on Internet. We have just arranged it in one platform for educational purpose only. In each content, the hyperlink to the primary source is specified. All trademarks belong to their rightful owners, all materials to their authors. If you are the owner of the content and do not want us to publish your materials on our website, please contact us by email – [email protected]. The content will be deleted within 24 hours.
condemnationElliottEmpathyNaominews updateOsakaShowingsports news
0
Share

Cloudera to be acquired, turned private by CD&R, KKR in $5.3 billion deal | ZDNet

Slow broadband? This awesome speed upgrade is half price – and gets you online TOMORROW