Notice: amp_is_available was called incorrectly. `amp_is_available()` (or `amp_is_request()`, formerly `is_amp_endpoint()`) was called too early and so it will not work properly. WordPress is currently doing the `pre_get_posts` hook. Calling this function before the `wp` action means it will not have access to `WP_Query` and the queried object to determine if it is an AMP response, thus neither the `amp_skip_post()` filter nor the AMP enabled toggle will be considered. It appears the theme with slug `publisher` is responsible; please contact the author. Please see Debugging in WordPress for more information. (This message was added in version 2.0.0.) in /home/runcloud/webapps/techilive/wp-includes/functions.php on line 5313
 Elliott: Simone Biles is right on time to shine at Tokyo Olympics - TechiLive.in 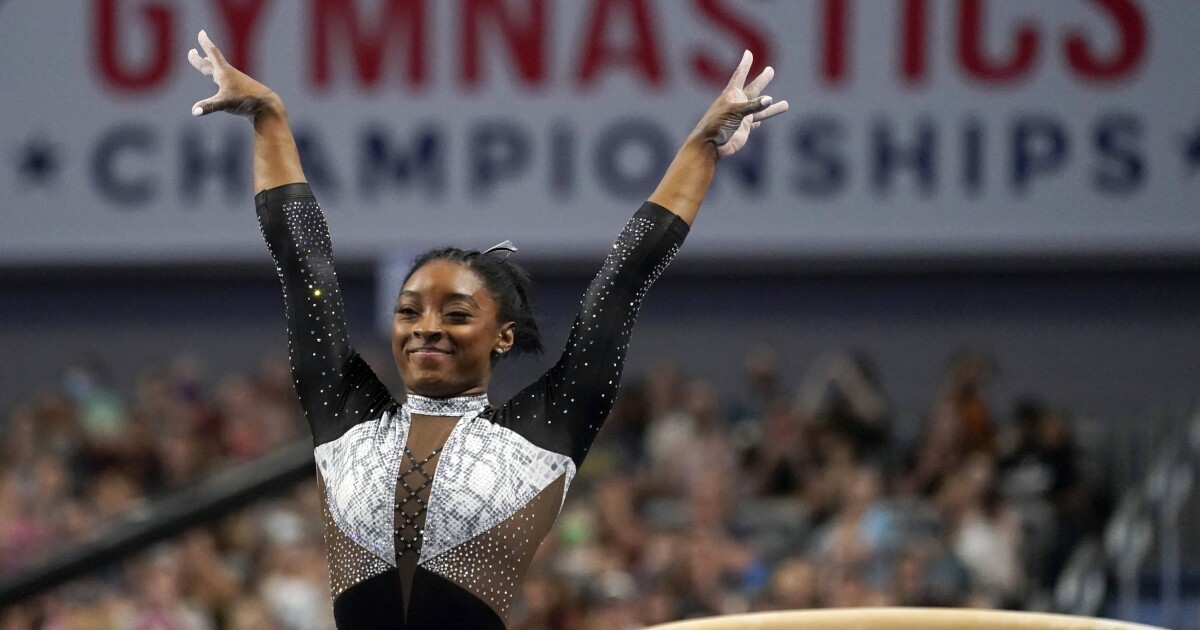 Elliott: Simone Biles is right on time to shine at Tokyo Olympics

Simone Biles’ fearlessness and unmatched skills created little doubt that she would win the women’s all-around title at the U.S. gymnastics championships. But Biles, who’s trying to repeat as the Olympic all-around champion in Tokyo and lead the U.S. to another team gold medal, left nothing to chance in Sunday’s national finale, bringing the power and sizzle that make her the best gymnast who has graced a mat.

Biles put on a show in the finale for an adoring crowd at Dickies Arena, topping her first-day score while wrapping up her seventh national all-around title and setting herself up nicely for the Olympic trials June 24-27 in St. Louis. She controlled the overexuberance that had carried her out of bounds three times during her floor exercise routine on Friday, stepping out once but otherwise preserving her trademark strength and amplitude. This woman — and her spirit — can soar.

“It’s so crazy because in training I never go out of bounds and I never have this much power, but adrenaline is where it comes, so we just have to focus on working with that,” she said. “It’s not a bad thing, but it could be if I keep going out of bounds.”

The only misfortune she experienced was minor: she snapped a fingernail on her first vault. “I’m very upset about it because they’re pretty cute this time,” she said, holding her fingers toward the camera during her post-event webinar.

She couldn’t be too upset. Discomfort that resulted from jamming her ankles on Wednesday led her to skip the daring Yurchenko double pike vault she pulled off last month — she’s the only woman in the world to land it — but the vaults she did instead were effortless and stunning. She racked up 60.10 points on Sunday and 119.65 overall, ahead of dynamic Sunisa Lee (114.95), who had the meet’s top uneven bars score.

“I feel like I’m on the correct road for the trials,” Biles said, adding that she plans to do the Yurchenko double pike vault at least once in the two-day trials.

Jordan Chiles, who trains alongside Biles in Spring, Texas, and is set to enter UCLA in the fall, was third with 114.45 points. Emma Malabuyo, also an incoming Bruins freshman and in her ninth year on the national team, finished a strong fourth with 110.45 points and was deemed “very, very impressive” by U.S. high performance team coordinator Tom Forster.

“It’s great to see Emma Malabuyo back in her international form that she was in a couple years ago. She’s wrestled with a couple injuries here and there,” he said. “That was really what I need to see. That was probably the biggest surprise that I had.”

Eighteen women were named to the U.S. national team and were invited to the Olympic trials, but others can petition to join them. The top two in the all-around standings at the trials will get Olympic berths. The U.S. can send a four-woman team to Tokyo, plus two other individual competitors whose scores won’t count toward the U.S. team score. If Carey has a top-two finish at the trials and gets an automatic berth she could give up her individual spot and the U.S. would lose it.

Lee, who finished second to Biles at the 2019 U.S. championships, fought through injuries to compile the best two-day uneven bars score and second-best (to Biles) on the balance beam. “I think this is a really good confidence booster because I wasn’t even at my full potential on floor, my vault could have been a little better, and today my bars was a little rough,” said Lee, who is from St. Paul, Minn., and is of Hmong descent.

“It definitely helped my confidence going in because I know that I don’t have to be at 100% to be able to still be in the top with Simone …. I feel people kind of doubted me because I have been injured for a little bit and I wasn’t doing my full potential on floor and vault.”

Chiles, 20, credited her move from the Pacific Northwest to train at World Champions Centre with Biles’ coaches, Laurent and Cecile Landi, for putting her on an upward trajectory in every possible way. She called them “the dopest people I’ve ever met in my life,” her ultimate compliment.

“It’s crazy to see how I was in the past, to now, and definitely my confidence is way better than it was back in the day. I’ve been at this for a while.”

Biles, 24, has been at this long enough to win a mind-boggling 15 medals at the world championships to go with the four Olympic gold medals and one bronze (balance beam) that she won in Rio in 2016. She’s moving powerfully and purposely toward the next challenge. “I feel like every single championship stands out for a reason,” she said, “but this one stands out specifically because it’s the road to Tokyo.” A road paved with triumphs and gold.

Denial of responsibility! TechiLive.in is an automatic aggregator around the global media. All the content are available free on Internet. We have just arranged it in one platform for educational purpose only. In each content, the hyperlink to the primary source is specified. All trademarks belong to their rightful owners, all materials to their authors. If you are the owner of the content and do not want us to publish your materials on our website, please contact us by email – admin@techilive.in. The content will be deleted within 24 hours.
Loading...
BilesElliottnews updateOlympicsshineSimonesports newssports update
0
Share