Notice: amp_is_available was called incorrectly. `amp_is_available()` (or `amp_is_request()`, formerly `is_amp_endpoint()`) was called too early and so it will not work properly. WordPress is currently doing the `pre_get_posts` hook. Calling this function before the `wp` action means it will not have access to `WP_Query` and the queried object to determine if it is an AMP response, thus neither the `amp_skip_post()` filter nor the AMP enabled toggle will be considered. It appears the theme with slug `publisher` is responsible; please contact the author. Please see Debugging in WordPress for more information. (This message was added in version 2.0.0.) in /home/runcloud/webapps/techilive/wp-includes/functions.php on line 5313
 Elliott: Simone Biles shows her human side while proving again she's the greatest - TechiLive.in 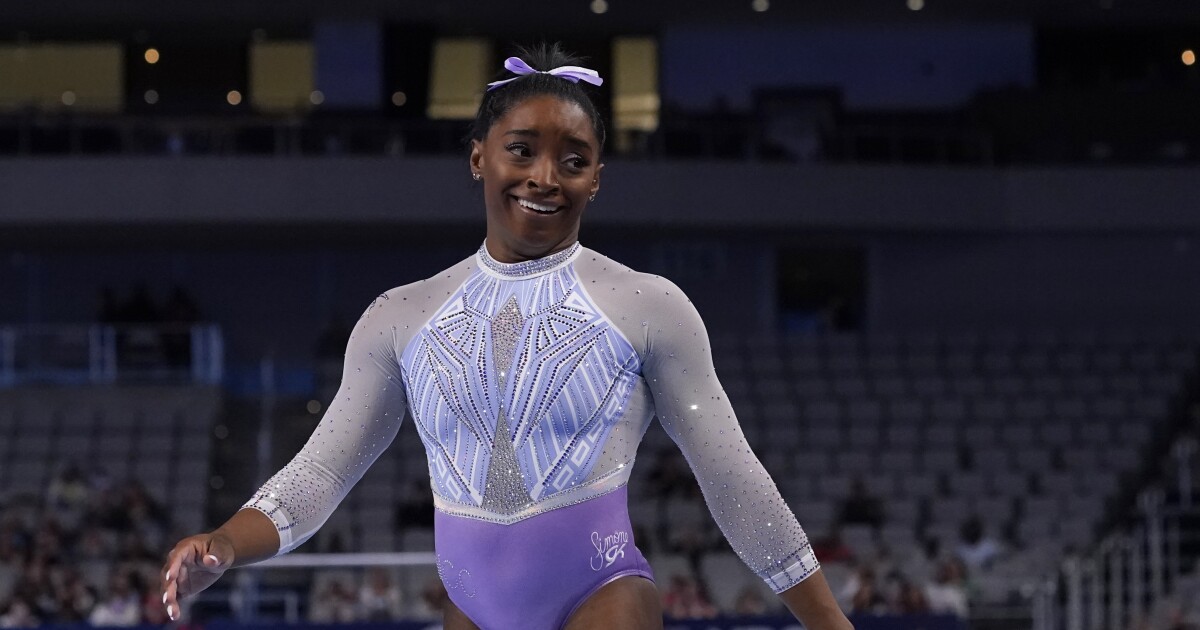 Elliott: Simone Biles shows her human side while proving again she’s the greatest

The sequined outline of a goat, sketched on the right shoulder of Simone Biles’ leotard, sparkled under the lights at Dickies Arena as she waited to perform her floor exercise routine Friday night. Biles is acknowledged to be the goat of women’s gymnastics — Greatest of All Time — and she came to the U.S. championships this weekend all but a lock to win her seventh U.S. all-around title.

But even the greatest sometimes have a misstep or two.

She had flown high and far on her two vaults, moved nimbly between the uneven bars, and delivered a balance beam routine of staggering difficulty. But her tumbling and twisting is so powerful that the white lines on the springy floor couldn’t contain her, and she stepped out of bounds three times during her floor exercise routine. She lost half a point from her score on the first day of the two-day women’s competition but she’s still the GOAT by any measure.

If anything, the missteps made Biles seem more human — and they gave her room to put on a real show at the U.S. Olympic trials later this month in St. Louis before she shines on the big stage at the Tokyo Games. Even though on Friday she replaced the history-making Yurchenko double pike vault she did last month with an “easier” Cheng (and did a second vault, called an Amanar, with a hop on the landing), she easily had the top score on Friday. Her total of 59.550 points put her well ahead of a gritty Sunisa Lee and Jordan Chiles, who trains with Biles in Spring, Texas.

The U.S. championships will determine which women qualify to compete at the trials, with the top eight all-arounders automatically earning berths and the rest being selected by a committee. For Lee, who has battled injuries, a strong performance on Friday was especially meaningful because it was the first time her father, John, had seen her compete in person in three years. He was paralyzed in an accident in 2019.

“It was amazing having him here,” she said “Before the competition, he told me to forget about everything and just do what I do best.”

That, she did. “It felt really good to be back out there because I feel people kind of counted me out a little bit because I was only doing bars and beam for a little bit,” she said of having to limit her competition because of a foot injury. “But I think by trials I can be back to 100 percent.”

Chiles steadied herself after an early wobble on the balance beam but kept calm and earned 13.95 points. It’s her third straight strong meet and she’s squarely among the favorites here and at the Olympic trials. “This meet is really, really important. It’s the competition right before trials and I just wanted to show I can stay consistent the whole time,” she said. “I’m really happy that I was able to do that today.”

Highlights from Simone Biles’ performances at the U.S. Gymnastics Championships this week.

Rio team gold medalist Laurie Hernandez, who has been attempting a comeback, was withdrawn from the competition on the advice of medical personnel after performing her balance beam routine. It’s still possible that she will compete on Sunday.

The men’s competition will end on Saturday and is likely to feature the crowning of a new all-around U.S. champion. Six-time all-around winner Sam Mikulak of Newport Beach and Corona del Mar High fell prey to nerves, fatigue, and a lack of competitive experience the past year and was in seventh place with 82.45 points after Thursday’s opening session, 3.8 points behind leader and two-time NCAA all-around champion Brody Malone of Stanford. Yul Moldauer, the 2017 U.S. men’s all-around champion, was tied for second with Brandon Briones of Stanford with 83.60 points each.

“I really didn’t come in here having any high expectations. I just wanted to come in and focus on my gymnastics because that’s the one thing I can control, and just hitting routines,” said Malone, whose total of 86.25 points included tying for the best vault with a score of 14.70.

Mikulak’s high bar score was the best of the session and assured him an invitation to the Olympic trials. But he fell off the parallel bars and struggled during his floor exercise routine. “By no means did I feel like my good, confident, gymnastics self. I’m going to think a lot going and seeing what I can adapt, what I can change, kind of some quick tweaks to give me that confidence back,” said Mikulak, who intends to retire from the sport after the Olympics.

Mikulak said he planned to consult with his sports psychologist before the finale to get “some new, positive vibes,” and that he was considering adjusting his diet to improve his energy. “One thing I guess I’ve got going right now,” he said, “the bar is set real low and I should be able to improve a lot from this day going into Saturday.”

Denial of responsibility! TechiLive.in is an automatic aggregator around the global media. All the content are available free on Internet. We have just arranged it in one platform for educational purpose only. In each content, the hyperlink to the primary source is specified. All trademarks belong to their rightful owners, all materials to their authors. If you are the owner of the content and do not want us to publish your materials on our website, please contact us by email – admin@techilive.in. The content will be deleted within 24 hours.
BilesElliottgreatesthumannews updateprovingshesshows
0
Share

US recovered majority of ransom paid in Colonial Pipeline hack