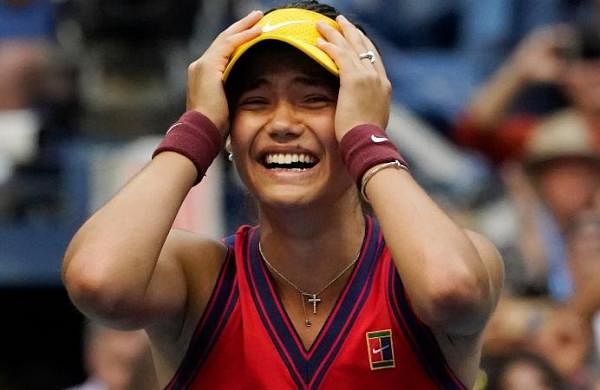 In more than a century of organised sport, there has never been a story like the one etched in the sands of time by Emma Raducanu. She came to Flushing Meadows as an 18-year-old, hoping to get into the main draw. She didn’t just get into the main draw but picked off her competition, one by one, without fuss, to win the US Open.

Sure, teenagers winning Grand Slams isn’t new. Maria Sharapova, Steffi Graf, Chris Evert, Martina Hingis, Tracy Austin and Monica Seles have all done it in different time periods. What, though, is ridiculous about Raducanu’s triumph is the way she went about her business, a rookie who operated like an alpha. The records she set over the last 17-18 days in New York make for a surreal reading.

This was only her second Major appearance at a Slam. No woman in history had previously won a Major without at least taking part in four. She is the first qualifier, man or woman, to give a victory speech at a Major. She is also the first woman from Great Britain to win a Slam in over 40 years. She is the youngest Slam champion since Sharapova. She is also the first woman to win the US Open without dropping a set since Serena Williams did it in 2014. Raducanu’s record reads: played 20 sets, won 20 sets.

Once you have allowed for the jaw to hit the ground, you may let it remain there because consider this: when she made her Wimbledon debut a few months ago as a wild card, she was, at least ranking wise, the 10th best across Britain. It was there, in the first week of July, where she first came into the limelight, even taking into consideration Britain’s love for hyping their athletes.

Over three matches spanning a week, SW19 jived to the beats of an 18-year-old, a daughter of an immigrant, as she took down the likes of Sorana Cirstea and Marketa Vondrousova. On Manic Monday, when Murray Mount aka Henman Hill temporarily transformed into Raducanu Ridge, she became overwhelmed and had to retire because of breathing problems. Even as John McEnroe questioned her mental fortitude, a problematic view endorsed by the likes of Piers Morgan and Kevin Pietersen, Raducanu began engineering a takedown that will be spoken about for ages.

Critics of women’s tennis will perhaps point towards the uncertainty that’s visible in sport right now (Raducanu is the fifth different woman to win a Slam in the last 11 months, with Saturday’s final between the Brit and Leylah Fernandez being the fifth different pairing in as many finals). However, what that statement hides is the depth in women’s tennis today. Fernandez, at 19, is the embodiment of that depth. Compared to Raducanu, the Canadian is a veteran. This was her seventh Major and her path to the final was an obstacle course the Olympics wouldn’t have because it would be deemed too tough to even attempt.

Yet, the 19-year-old showed composure, poise and remarkable hitting to lay waste to her more illustrious opponents. That each of her last four matches went the distance spoke volumes about her courage and grit.

If Raducanu relied on her service and ability to make passing shots down both wings for points, Fernandez’s modus operandi was the way she preferred to hit the ball. She hit them early, generating crazy angles. What, though, united these two athletes was the way in which they approached matches. They never panicked. There was a joie de vivre. While others tried to win a title, these two just wanted to have some fun. On Saturday night, under the New York lights inside the cavernous Arthur Ashe Stadium, that’s what they did.

Forget for a moment that the scoreline read 6-4, 6-3. From the moment Raducanu tossed the ball to begin service in game No 1, it was high octane, intensity was off the match and games were filled with tension, intrigue and layer upon layer of history.

Like she has often done, the 18-year-old held service before breaking immediately to run up a 2-0 lead. However, the 19-year-old, using her punishing forehands, broke back before levelling. 2-2 after 27 minutes, it was already tennis in excelsis. Six games and 31 minutes later, Raducanu won the opening stanza with a forehand winner. In the crowd, Virginia Wade, the last Brit woman to taste Slam success, was smiling, ready to welcome another into one of the most exclusive of sporting clubs anywhere.

Raducanu had a big opening when she had three break points at 1-0 in the second set but Fernandez showed immense courage to save all three of them to keep herself in the match. Like the Canadian has done all tournament, she broke to take a 2-1 lead. At that point, a third set seemed inevitable. However, Raducanu, whose biggest victory coming into the tournament was a $125000 WTA event in Pune in 2019, immediately broke back with powerful passing shots.

She broke again and consolidated before losing two match points on the Fernandez serve. At 5-3 on her serve, Raducanu, understandably, showed some nerves for the first time in this tournament. She twice tossed the ball without serving. Those nerves showed again when, while retrieving a shot, she grazed her knee on the hard surface. She had slid too close and the result was blood flowing down to ankle from her knee. At 30-40 and facing a break, she had to take a medical time out much to Fernandez’s chagrin.

With the gaping wound taped up, she saved the break point before finishing the fairy tale with an ace that licked the paint. On January 5 2021, when she was No 343 in the world, she asked on Twitter whether ‘A levels (advanced level qualifications taken by students aged 16 and above in the UK) are happening’ given the lockdown in the country.

Denial of responsibility! TechiLive.in is an automatic aggregator around the global media. All the content are available free on Internet. We have just arranged it in one platform for educational purpose only. In each content, the hyperlink to the primary source is specified. All trademarks belong to their rightful owners, all materials to their authors. If you are the owner of the content and do not want us to publish your materials on our website, please contact us by email – [email protected]. The content will be deleted within 24 hours.
EmmaEmma Radacanuleylah fernandeznews updateRaducanusports newssports updatesupernova
0
Share

There is a dirty game going on against Virat Kohli, feels former Pakistan captain Salman Butt