Notice: amp_is_available was called incorrectly. `amp_is_available()` (or `amp_is_request()`, formerly `is_amp_endpoint()`) was called too early and so it will not work properly. WordPress is currently doing the `pre_get_posts` hook. Calling this function before the `wp` action means it will not have access to `WP_Query` and the queried object to determine if it is an AMP response, thus neither the `amp_skip_post()` filter nor the AMP enabled toggle will be considered. It appears the theme with slug `publisher` is responsible; please contact the author. Please see Debugging in WordPress for more information. (This message was added in version 2.0.0.) in /home/runcloud/webapps/techilive/wp-includes/functions.php on line 5313
 Emmanuel Macron slapped in the face during walkabout in France - TechiLive.in 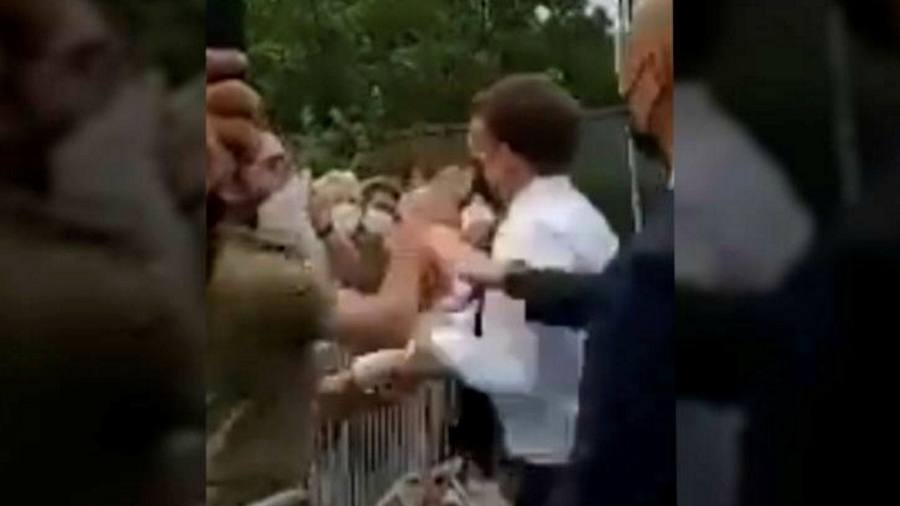 Emmanuel Macron slapped in the face during walkabout in France

A man slapped Emmanuel Macron in the face on Tuesday, briefly interrupting a walkabout during the French president’s tour of the provinces ahead of this month’s regional elections.

Two 28-year-old men were being questioned by the gendarmerie after the audible blow — accompanied by a shout of the royalist slogan “Montjoie Saint-Denis!” and “Down with Macronism!” — was delivered by a man among a group of onlookers in the southern town of Tain-l’Hermitage.

Macron’s Elysée Palace said that a man had “tried to hit” the president, and that the conversations and handshakes with the crowd resumed immediately after the incident and the visit continued.

Opposition parties have been fiercely critical of Macron’s “Tour de France” ahead of the regional elections on June 20 and 27, arguing that he was using his presidential status to promote his La République en Marche party without being subject to campaign finance limits.

His supporters have argued that he merely wants to “take the pulse” of the French people to work out what he can achieve in the final year of his presidential mandate, which was scarred first by the anti-government gilets jaunes protests from 2018 and then by the Covid-19 pandemic.

But Marine Le Pen, leader of the far-right Rassemblement National party and the politician expected to be his main rival in next year’s presidential election, asked: “Is there a single person in France who hasn’t understood that Emmanuel Macron is taking advantage of his position as president to campaign for the regional elections?”

On Tuesday, however, politicians across the spectrum rallied round to condemn the act of violence against Macron.

Le Pen said the “behaviour was unacceptable and to be thoroughly condemned in a democracy”, while Jean-Luc Mélenchon of the far-left La France Insoumise (France Unbowed) party, normally a fierce critic of Macron, said he was in solidarity with the president.

Shortly before the incident, Macron was calling for political calm. He was reacting to Mélenchon’s prediction that there would be a staged “murder or serious incident” in the final week of the presidential election campaign next year in order to demonise Muslims, and to the subsequent posting by a rightwinger of a video showing the simulated murder of a Mélenchon supporter.

“Opposition parties can express themselves freely in a democracy,” Macron said on Tuesday, “but the other side of that is an end to violence and hate . . . The French need something else, they are tired of the crisis and of bad news.”

Although Macron is sometimes accused by his detractors of being arrogant and out of touch, he relishes walkabouts and arguments or conversations with bystanders when he travels around the country. He is notorious among his critics for having told a gardener visiting the Elysée on a cultural open day who complained about the lack of work that he could find him a job in a restaurant or hotel just by crossing the road.

Macron is not the first French president to be targeted with violence in a public place. Nicolas Sarkozy was sometimes abused and once manhandled. And during the national day parade in July 2002, an extreme-right activist tried to shoot Jacques Chirac with a .22 rifle, but he missed and was later jailed.

Denial of responsibility! TechiLive.in is an automatic aggregator around the global media. All the content are available free on Internet. We have just arranged it in one platform for educational purpose only. In each content, the hyperlink to the primary source is specified. All trademarks belong to their rightful owners, all materials to their authors. If you are the owner of the content and do not want us to publish your materials on our website, please contact us by email – admin@techilive.in. The content will be deleted within 24 hours.
Education newsEducation updateEmmanuelfaceFranceMacronnews updateSlapped
0
Share