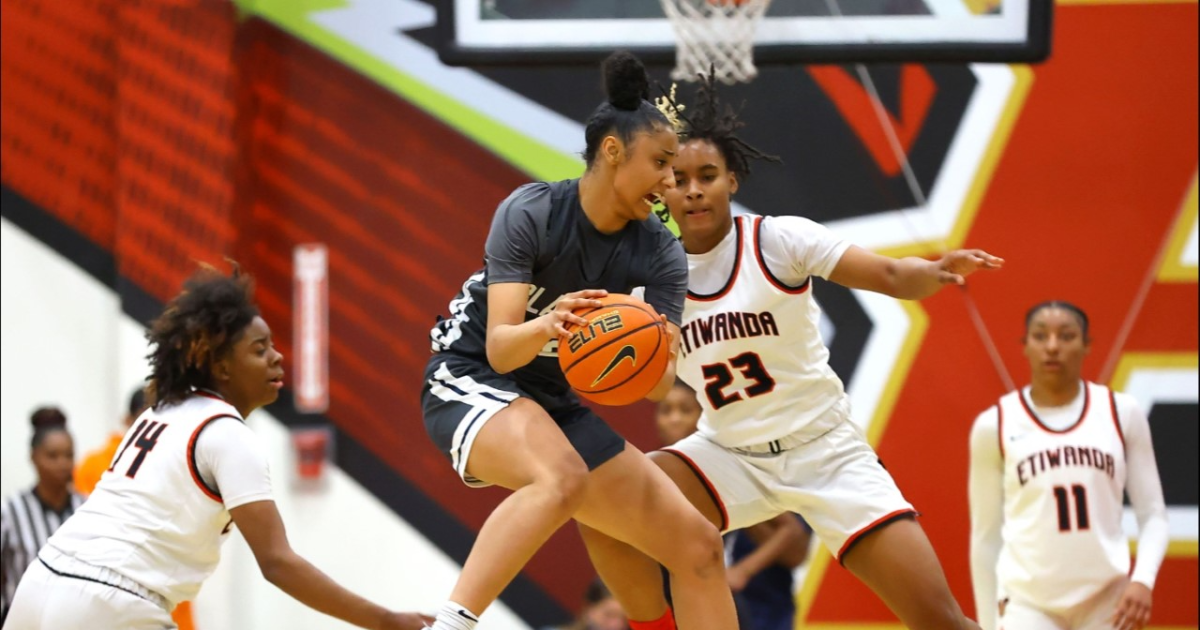 Rancho Cucamonga Etiwanda girls’ basketball coach Stan Delus says his team has long stood as the “powerhouse without the chip.”

The team’s records since Delus’ arrival combine for one of the most impressive runs in recent Southern California girls’ basketball history, going 96-23 since 2017 heading into this season. But almost every year, the public school’s season has been ended by a larger, private powerhouse.

“It means everything, because it solidifies what Etiwanda really is,” a drenched Delus said after a postgame ice shower from his players. “We’ve come up short so many times, and for them to finally get over the hump — I mean, people don’t understand.”

After the final buzzer, sophomore Kennedy Smith led the Eagles (28-0) to their fans, gesturing to the crowd in one united cry:

As Eagles players assembled in their layup lines 15 minutes before the start of the game, a cacophony of cowbells sounded from the visiting section as Juju Watkins and the rest of the Sierra Canyon players ran onto the floor. Clad in crimson warmup shirts, captain Daisa Mitchell and other Eagles exchanged smirks, clapping their hands softly as the noise behind them swelled.

In the first half, Etiwanda looked shaken in the middle of a gym that bucked and roared after every Sierra Canyon basket. A normally centered Eagles offense committed a slew of unforced turnovers, as passes sailed out of bounds through the hands of players. Freshman point guard Aliyahna Morris, whom Delus has praised all season as the team’s offensive catalyst, went scoreless as top-ranked recruit Juju Watkins torched one-on-one coverage to the tune of 20 first-half points.

But anyone in the gym who’d seen Etiwanda play this season knew the team was never out of it.

“They play all the way to the zeroes,” Delus said. “Never-say-die attitude.”

Down 33-21, Delus wasted no time turning to a press that quickly forced a few Sierra Canyon turnovers and swung the momentum in Etiwanda’s favor. A few minutes into the third quarter, Trailblazers coach Alicia Komaki pulled Watkins after she picked up her third foul. The Eagles quickly cut the lead to single digits.

Suddenly able to figure out Sierra Canyon’s zone, Etiwanda worked its way into the paint time and again for layups or kickouts to open shooters, cutting Sierra Canyon’s lead to three. Watkins was stifled, held to just four points in the second half.

With just under four minutes to play, Watkins drove the lane, seemingly finishing an and-one through a defender that would’ve pushed the Trailblazers’ lead to six. Instead, the referee called a charging foul that disqualified Watkins from the game.

From there, clutch shooting from Sa’lah Hemingway, who finished with 23 points, and timely layups from Kennedy Smith, who poured in 19, gave Etiwanda a lead in the final minutes.

Thirty-five former players were in attendance on Etiwanda’s side of the gym Saturday, Delus estimated. This championship was for them, he said. The years of blood and sweat that yielded tears were, at long last, worth it.

Denial of responsibility! TechiLive.in is an automatic aggregator around the global media. All the content are available free on Internet. We have just arranged it in one platform for educational purpose only. In each content, the hyperlink to the primary source is specified. All trademarks belong to their rightful owners, all materials to their authors. If you are the owner of the content and do not want us to publish your materials on our website, please contact us by email – [email protected]. The content will be deleted within 24 hours.
basketballBeatCanyonCloseEtiwandaGirlsnews updateSection
Share