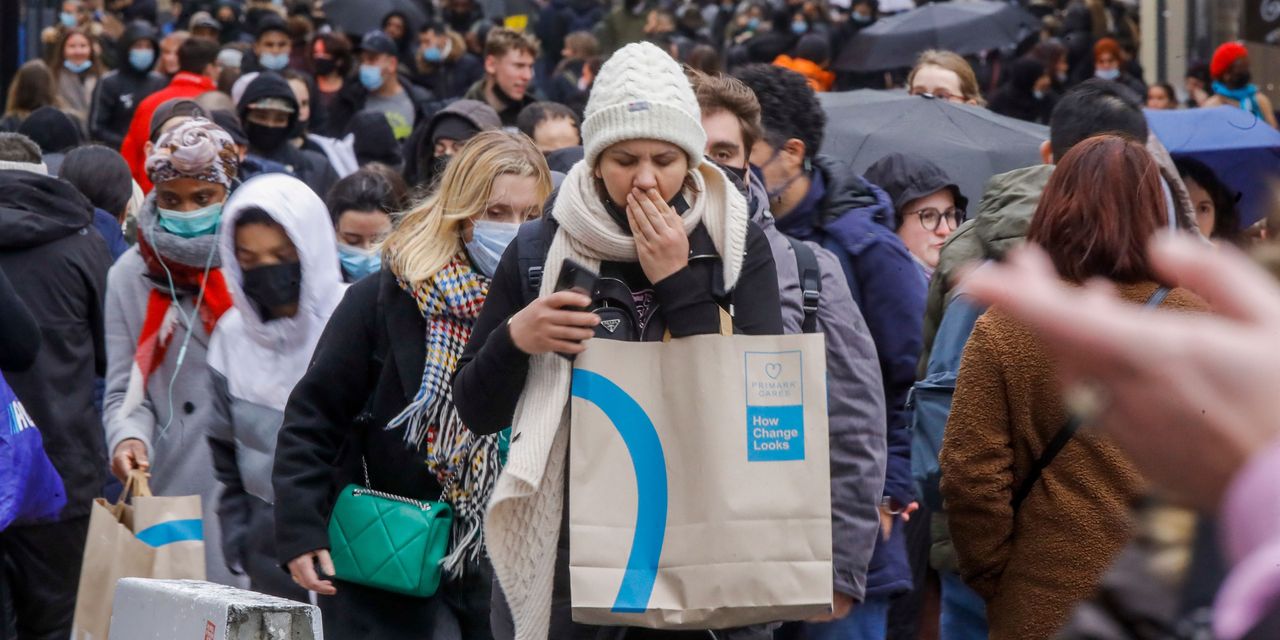 Consumer prices in the eurozone increased at a record pace in the year through December as food prices jumped, presenting a fresh challenge for the European Central Bank as it strives to persuade households and businesses that inflation will return to its target toward the end of this year without a rise in borrowing costs.

The European Union’s statistics agency Friday said consumer prices in December were 5% higher than a year earlier, a pickup from the previous record of 4.9% in November.

Economists surveyed by The Wall Street Journal had expected the inflation rate to ease to 4.7%. But while energy prices rose at a slower pace in the 12 months through December, food-price inflation jumped to 4.6% from 1.9% in November.

The pickup in the inflation rate as 2021 drew to a close was a surprise for many economists, who had expected a peak in November. As in the U.S., eurozone consumer prices have risen faster than policy makers had anticipated over recent months, raising questions for investors, businesses and households about the credibility of the ECB’s assertions that high inflation is likely to be temporary.

The Federal Reserve has responded to the pickup in inflation by signaling that it is likely to raise its key interest rate three times this year, but the ECB in December repeated its view that a rise in borrowing costs during 2022 wouldn’t be necessary. While the small rise in the inflation rate during December is unlikely to change its stance, a longer period of high inflation makes a rate rise next year more likely.

“We think there is a growing chance that later this year the bank will begin to prepare the ground for tighter monetary policy in 2023,” said Jack Allen-Reynolds, an economist at Capital Economics.

The core inflation rate, which excludes highly volatile items such as energy and food, was unchanged at 2.6%. But while services inflation slowed as consumer demand eased in the face of a fresh surge in Covid-19 infections, prices of manufactured goods rose at a faster pace, a sign that some of the higher costs caused by the logjams clogging global supply chains are being passed on to households.

The ECB in December said inflation would likely be above its 2% target for longer than it had expected, raising its forecast for average price rises this year to 3.2% from the 1.7% it projected in September.

said the inflation rate was likely to ease over the course of the year, and the central bank’s economists forecast it would average 1.8% in 2023.

“It is very unlikely that we will raise interest rates in the year 2022,” she told reporters after saying the bond-buying program launched to counter the economic effects of the pandemic would end in March.

The ECB’s big worry is that households and businesses will grow accustomed to prices rising more quickly than its target rate, opening the way for a self-reinforcing series of higher pay deals and price rises by employers to cover their increased costs.

The higher the inflation rate goes, and the longer it stays above the target, the greater the risk that the eurozone will see wages and prices spiral. But despite another surprise in December, economists remain confident that the inflation rate will start to fall in January.

One reason lies in Germany’s efforts to support its economy during the early months of the pandemic. In July 2020, the government of the eurozone’s largest member cut its value-added tax rates for six months. That meant consumer prices from July 2021 onward were being compared with artificially low prices from a year earlier, exaggerating inflationary pressures. That is no longer be the case, since the tax rates reverted back to their pre-pandemic levels at the start of 2021.

But the outlook thereafter is less clear, with supply-chain blockages and uncertainties about the supply of natural gas from Russia having proved longer-lasting than economists or policy makers had expected.

There are some signs that the logjams clogging global supply chains are beginning to loosen, and the prices paid by businesses for raw materials and other inputs are rising less rapidly. A survey of purchasing managers at factories around the world in December found that input prices rose at the slowest pace since March 2021.

“On a global basis, while price pressures are still at extreme levels and delivery times are stretched, things appear to have turned in recent months,” said

an economist at HSBC.

Denial of responsibility! TechiLive.in is an automatic aggregator around the global media. All the content are available free on Internet. We have just arranged it in one platform for educational purpose only. In each content, the hyperlink to the primary source is specified. All trademarks belong to their rightful owners, all materials to their authors. If you are the owner of the content and do not want us to publish your materials on our website, please contact us by email – [email protected]. The content will be deleted within 24 hours.
business newsBusiness updateConsumer Price IndexCurrencyECBEconomic Newseconomic performanceEconomic Performance/Indicators
Share