Notice: amp_is_available was called incorrectly. `amp_is_available()` (or `amp_is_request()`, formerly `is_amp_endpoint()`) was called too early and so it will not work properly. WordPress is currently doing the `pre_get_posts` hook. Calling this function before the `wp` action means it will not have access to `WP_Query` and the queried object to determine if it is an AMP response, thus neither the `amp_skip_post()` filter nor the AMP enabled toggle will be considered. It appears the theme with slug `publisher` is responsible; please contact the author. Please see Debugging in WordPress for more information. (This message was added in version 2.0.0.) in /home/runcloud/webapps/techilive/wp-includes/functions.php on line 5313
 Even without Ogwumike sisters, Sparks rely on defense in preparation for Mystics - TechiLive.in 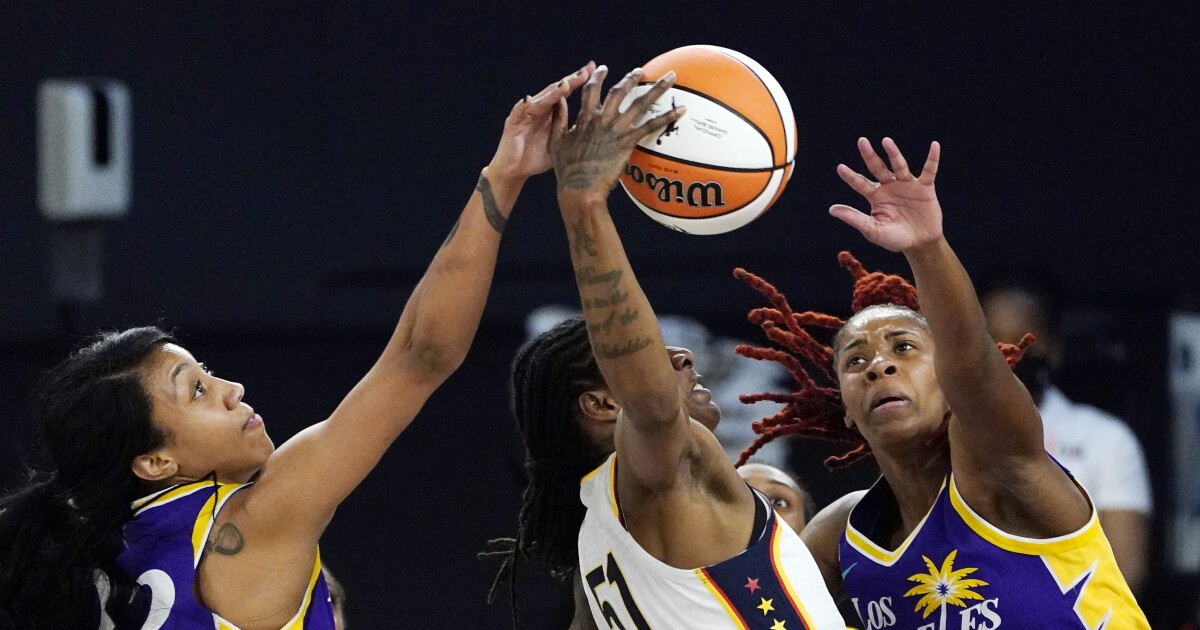 Even without Ogwumike sisters, Sparks rely on defense in preparation for Mystics

Players sprint and trap all over the floor. It’s chaotic, aggressive and energetic.

After losing their first two games by an average of 25.5 points, the Sparks have locked down on defense to win four of five entering a Thursday road matchup against the Washington Mystics. The Sparks (4-3) are tied for the best defensive rating in the WNBA, have the fourth-best opponent field goal percentage (41.2%) and force 21.3 turnovers a game, a league best.

The defensive turnaround helped overcome a sputtering offense that ranks 11th in offensive rating, a short bench, and unavailability of forwards Nneka and Chiney Ogwumike. Nneka, who suffered a Grade-2 sprain against the Dallas on June 1, is sidelined for four to six weeks. Chiney is week-to-week with right knee soreness. Both are still out.

The Ogwumike sisters are among the longest-tenured Sparks, holdovers from Fisher’s first year with the team. Having veteran leadership during training camp helped establish the defensive foundation in Fisher’s third season. Free agent acquisitions such as Bria Holmes and Nia Coffey (2.1 blocks per game) fit seamlessly with second-year players Brittney Sykes and Te’a Cooper, who established themselves as defensive spark plugs last season.

The team that ranked third in defensive rating last season came back stronger despite losing 2020 defensive player of the year Candace Parker and waiving defensive stalwart Tierra Ruffin-Pratt. A key reason was a coaching transaction that kept assistant Latricia Trammel in L.A.

Known as the team’s defensive tactician, Trammel was rumored to be in contention for an assistant job with the Dallas Wings, where Vickie Johnson was taking over as head coach. Instead of joining the rebuilding effort with Johnson, with whom she coached in San Antonio, Trammel renewed her contract with the Sparks.

Retaining Trammel was “vital to the culture that we’re trying to build,” Fisher said.

When he hired her in 2019, Fisher knew Trammel, who guided Oklahoma City University to NAIA Division I national championships in 2014 and 2015, had the willingness to take on several tasks that would be necessary in the WNBA. After succeeding at smaller colleges, where head coaches handle as many on-court issues as off-court administrative problems, no job would be too big for Trammel, Fisher said.

Trammel proved it by connecting with players immediately through her passion for defense that is contagious.

“She just ignited that fire in me to want to be a defender just because of how passionate I see her on defense,” Sykes said before the season. “It made me want to be passionate about it and I appreciate her for that.”

Coming off a second-team all-defensive team nod last year, Sykes is “hell-bent” on winning the defensive player of the year. The athletic 5-foot-9 guard has the second-most defensive win shares among players who have appeared in more than half of games. Sykes only trails teammate Amanda Zahui B., who missed the first two games because of a back injury, and is averaging 11 points, six rebounds and two blocks.

With both Ogwumike sisters sidelined, the Sparks will rely more on the 6-foot-5 Zahui B.’s presence to help control the glass, where Fisher sees room for major improvement. The undersized Sparks average a league-low 29.3 rebounds per game and give up a WNBA-high 40.7 rebounds to opponents.

The perfect defensive performance for Fisher includes dominating the glass, keeping opponents to less than 40% shooting from the field and forcing 20 turnovers. The Sparks are close in some categories, but aren’t content.

“We’re not going to rest on any early statistical success,” Fisher said. “We think there’s still a lot of room for growth and we’re going to try to maximize it every week.”

Loading...
Denial of responsibility! TechiLive.in is an automatic aggregator around the global media. All the content are available free on Internet. We have just arranged it in one platform for educational purpose only. In each content, the hyperlink to the primary source is specified. All trademarks belong to their rightful owners, all materials to their authors. If you are the owner of the content and do not want us to publish your materials on our website, please contact us by email – admin@techilive.in. The content will be deleted within 24 hours.
defenseMysticsnews updateOgwumikepreparationrelysistersSparks
0
Share