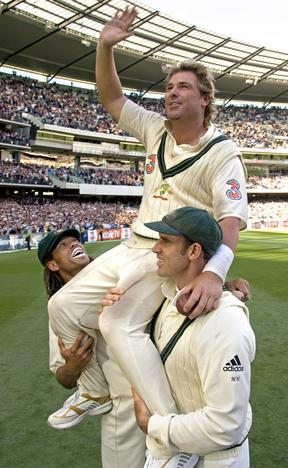 Multiple media outlets said Symonds, who was 46, had been involved in a single vehicle incident in Hervey Range, 50km from Townsville on Saturday night.

“Early information indicates, shortly after 11 pm the car was being driven on Hervey Range Road, near Alice River Bridge when it left the roadway and rolled,” Queensland police said in a statement.

“Emergency services attempted to revive the 46-year-old driver and sole occupant, however, he died of his injuries.

“The Forensic Crash Unit is investigating.”

Symonds’ death comes two months after the passing of his former team mate Shane Warne, who died of a heart attack in Thailand on 4 March.

A powerful batter, canny bowler and fine fielder, Symonds was part of two 50-over World Cup wins and Australia’s Ashes victory over England in 2006-07.

Born in Birmingham, Symonds played county cricket in the UK for Kent, Gloucestershire, Lancashire and Surrey.

He held the joint-record for most sixes hit in a County Championship innings – he hit 16 in a knock for Gloucestershire against Glamorgan in 1995 – until Ben Stokes bettered his total last week.

His death is another significant loss for Australian cricket, following the deaths of former wicketkeeper Rod Marsh and legendary spinner Shane Warne earlier this year.

He played alongside Warne and attended his memorial service in Melbourne following Warne’s shock death in Thailand in March.

Symonds was best known for his exploits in one-day cricket, in which he scored 5,088 runs at an average of 39.75 and also took 133 wickets.

He scored his first of two Test hundreds in the Boxing Day Ashes Test of 2006, hitting 156 as Australia won by an innings and 99 runs.

But his career was not without controversy. In 2009, he was sent home from the World Cup in England for disciplinary reasons, which brought about the end of his international career.

During a 2005 tour of England, he was dropped for two one-day internationals after turning up drunk to a match against Bangladesh in Cardiff.

In August 2008, he was sent home from Australia’s one-day series against Bangladesh in Darwin after missing a compulsory team meeting in order to go fishing.

Tributes for Symonds have been flowing in from the global cricket community, with former team-mate and wicketkeeper Adam Gilchrist writing: “This really hurts.”

Former England test captain Michael Vaughan said: “Simmo … this doesn’t feel real” while another former England player Alex Tudor said: “It has been a sad time for our wonderful game.”

Former fast bowler and commentator Damien Fleming said: “This is so devastating. Roy was so much fun to be around. Our thoughts are with Symonds family.”

Fellow former fast bowler Jason Gillespie wrote: “Horrendous news to wake up to. Utterly devastated. We are all gonna miss you mate.”

Andrew Symonds playing for Australia against New Zealand in a test in Brisbane in 2008.
Photo: Photosport / Andrew Cornaga

In absolute shock. Andrew Symonds Rest in Peace. Love and support to all his family and friends.

Andrew Symonds was one of the most entertaining one-day cricketers I had the pleasure to watch during my childhood and into my teenage years.

Probably the batsman who would best fit the definition of ‘fearless’ at the crease.

Terrible to hear of his death this morning. RIP.

RIP Andrew Symonds. His 156* at Westpac Stadium in 2005 is one of the best innings ever on NZ soil. pic.twitter.com/onPAvGilqT

Denial of responsibility! TechiLive.in is an automatic aggregator around the global media. All the content are available free on Internet. We have just arranged it in one platform for educational purpose only. In each content, the hyperlink to the primary source is specified. All trademarks belong to their rightful owners, all materials to their authors. If you are the owner of the content and do not want us to publish your materials on our website, please contact us by email – [email protected]. The content will be deleted within 24 hours.
AndrewAudiocricketCurrent AffairsDiesExAustralianInternationalNews
0
Share

If your birthday is on May 18