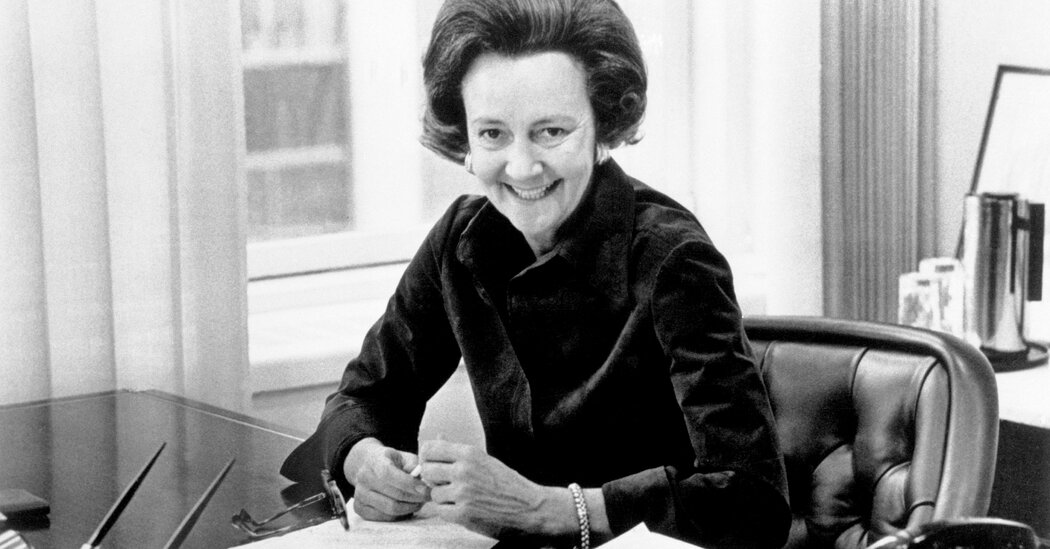 This article is part of our latest special report on Museums, which focuses on reopening, reinvention and resilience.

Giving a luxurious designer evening gown the central position in an exhibition about Katharine Graham, former chief executive of the Washington Post Company, may at first seem as logical as highlighting a pair of aviator glasses in a show about Gloria Steinem. Yes, each fashion choice was worn by a famous woman, but did it really have much to do with her power and influence?

For Mrs. Graham, the answer is a resounding yes.

That is one of the revelations in “Cover Story: Katharine Graham, CEO,” an exhibition at the New-York Historical Society that illustrates both her courage and tenacity as the first woman to lead a Fortune 500 company and the museum’s reinvention as an institution committed to women’s history.

Mrs. Graham, who died in 2001 at 84, wore the gown, a beaded Balmain design, as the guest of honor at Truman Capote’s Black and White Ball at the Plaza Hotel in Manhattan in November 1966. The historical society show, which opened on Friday and runs through Oct. 3 in the museum’s Center for Women’s History, presents that masquerade party as a pivotal event in her evolution from a society matron to “the most powerful woman in America,” as Ms. Magazine described her in 1974.

“With the women’s history gallery, we’ve been interested in exploring ways that women accessed power that aren’t really the expected ways,” said Jeanne Gardner Gutierrez, a curatorial scholar in women’s history. According to Ms. Gutierrez, the spectacular party extended Mrs. Graham’s base of influence from Washington to New York and introduced her to politicians, diplomats, artists and intellectuals who would become crucial to her success.

“What we’re arguing is that the Black and White Ball really helped her when it was time for her to explode into the national consciousness with the Pentagon Papers and with Watergate,” Ms. Gutierrez said.

The exhibition should also help restore Mrs. Graham to the national consciousness. Although the show coincides with the 50th anniversary of the Pentagon Papers — the secret history of Vietnam War policy first published by The New York Times in 1971, and soon after by The Washington Post under her leadership — “Cover Story” has its roots in the historical society’s perception that she was fading from public awareness. This examination of her career traces its origins to the founding of the Women’s History Center, which opened in 2017, and an earlier conversation between Louise Mirrer, the museum’s president and chief executive, and Joyce B. Cowin, the philanthropist whose name is now on the gallery that houses the show.

“I said, ‘I bet most young women and also young men today would have no idea of who Katharine Graham was,’” Ms. Mirrer recalled. “Joyce’s response was, ‘That’s absolutely impossible.’” The two women, who were having lunch at the museum’s restaurant, decided to ask their young female server. “The answer,” Ms. Mirrer said, “was a resolute no.”

If that server were to visit the center today, she would find that the 1,500-square-foot Graham exhibition “tells the story of a 20th-century woman whose life and specific experiences really do track the launch of women as full citizens,” Ms. Mirrer said.

That tale begins in the show’s first section, which chronicles Mrs. Graham’s early immersion in journalism. Her mother, Agnes Meyer, was a freelance writer, while her father, the millionaire banker Eugene Meyer, revitalized The Washington Post after buying it in 1933. Although he helped Katharine enter journalism after her college graduation, the exhibition also spotlights female writers and editors with less privileged backgrounds. They include Anne O’Hare McCormick of The Times, who was the first female foreign correspondent to win a Pulitzer Prize, and Dorothy Butler Gilliam, who in 1961 became the first Black woman The Post hired.

Such detailed context is “our mandate,” said Valerie Paley, the museum’s senior vice president and chief historian and the director of the center, who curated the show with Ms. Gutierrez. “That is, not to marginalize women even further by just studying them in a vacuum.” (The curators spoke over Zoom before the exhibition was installed.)

The show makes clear, however, that wealth did not shield the young Katharine from long-established attitudes. Her nascent reporting career evaporated after she married the lawyer Philip L. Graham, whom her father made publisher of The Post in 1948. Giving his own daughter the reins appeared unthinkable.

“To me, one of the most poignant aspects of the exhibition is the story of how her father absolutely could not see her as a C.E.O.,” Ms. Mirrer said.

But Mrs. Graham did take charge when her husband, who had bipolar disorder, committed suicide in 1963. Determined to keep The Post in the family, she became company president, later acquiring the titles of chief executive and publisher. The world, however, did not at first take her seriously.

Capote’s ball, which takes up the show’s entire middle section with photographs, memorabilia and evening wear, helped change that. “We saw we could use this as a kind of anchor that would draw our audiences in,” Ms. Paley said.

The exhibition’s final section highlights Mrs. Graham’s transformation from an insecure widow and mother to an executive who ordered the publication of the Pentagon Papers at a time when it might have ruined her company, which was presenting its first public stock offering. (A Supreme Court ruling vindicated her decision — a real-life drama that Steven Spielberg captured in the 2017 film “The Post,” which stars Meryl Streep as Mrs. Graham.)

In addition to this triumph and her support of The Post’s coverage of the Watergate break-in, the show features other examples of Mrs. Graham’s management decisions — there are many company memos — and the part she played in the fraught but pioneering debut of the newspaper’s Style section, which replaced its outdated “women’s pages” in 1969.

“We felt like her role in the history of journalism was known and had been acknowledged, but her role as a businesswoman had been underaddressed,” Ms. Gutierrez said.

But “Cover Story,” Ms. Paley said, is “not a hagiography.” The exhibition also examines the strike by The Post’s pressmen in 1975 — a photograph depicts Mrs. Graham’s being carried in effigy by picketers — and her sometimes slow recognition of the concerns of working women at her company. A friendship with Ms. Steinem, coupled with Mrs. Graham’s own experiences and pressure from the women’s movement, ultimately led her to embrace feminism.

Loading...
Denial of responsibility! TechiLive.in is an automatic aggregator around the global media. All the content are available free on Internet. We have just arranged it in one platform for educational purpose only. In each content, the hyperlink to the primary source is specified. All trademarks belong to their rightful owners, all materials to their authors. If you are the owner of the content and do not want us to publish your materials on our website, please contact us by email – [email protected]. The content will be deleted within 24 hours.
ExaminingGrahamsgroundbreakingKatharinelifelifestyle newslifestyle updatenews update
0
Share

Will Android ever have a perfect phone?