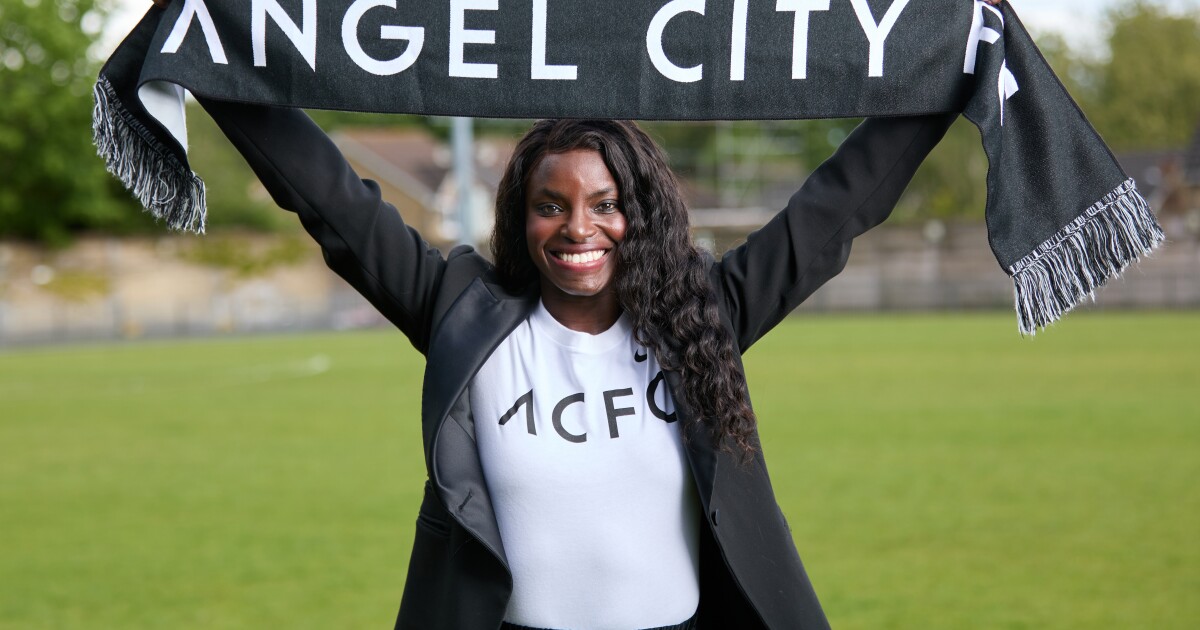 Exclusive: An inside look at why Angel City hired Eniola Aluko to build its team

Angel City FC is still a year away from its first game, but the fledgling NWSL club has found someone to guide that journey, hiring former English international player Eniola Aluko as its sporting director.

“She so personifies Angel City’s values,” club president Julie Uhrman told The Times. “She’s been a champion for women’s sports and female athletes her entire career. With her experience on the pitch and behind, she’s going to bring something really special, including that winning spirit.”

For Aluko, Angel City offered a chance to build a club and a culture from scratch while working for a team in which 45 of the 60 investors are women, the largest female-led ownership group in professional sports.

“I don’t think I would have found this opportunity with Angel City so exciting if I didn’t find that real opportunity to shape the future of women’s sport in a different way,” Aluko said in an exclusive interview.

In the UK, women’s soccer remains hidden in the shadows of the more established men’s game. That isn’t the case in the U.S., where MLS is just 26 years old and the women’s national team is a four-time World Cup champion.

“I see this opportunity as sporting director at Angel City — the first — as an opportunity to really do something special.”

“What I see with Angel City is a real brand that’s connected to what the soul of football is about. The fans, the community. I’m much more excited about rewriting the playbook, rewriting what football clubs are about,” said Aluko, who will oversee day-to-day soccer operations, including player acquisitions and the hire of the club’s first coach.

“I see this opportunity as sporting director at Angel City — the first — as an opportunity to really do something special.”

Aluko was born in Nigeria but raised in England, where she grew up playing against younger brother Sone, who went on to play in the Premier League. She made her professional debut at 14 and played for nine teams in three countries, including a two-year stint in the U.S. with the now-defunct WPS. A forward, she scored 33 times in 102 appearances with the national team, playing in three World Cups.

She has also worked in television as a soccer analyst, becoming the first woman pundit on the BBC’s Match of the Day. She completed law school at 21, which led to a consulting job with a sports agency.

“Her résumé speaks for itself,” said Shannon Boxx, a former U.S. team member who played with Aluko during her WPS days and is now part of Angel City’s ownership group. “When we were playing together she was studying for the bar and I was so impressed. I’m excited that she is part of this organization.”

After retiring as a player in January 2020, Aluko was named sporting director for the Aston Villa women just as they were about to be promoted to the first tier for the first time since 2004. The team went 3-13-6 during Aluko’s only full season in charge.

Due to COVID-19 restrictions, Uhrman said the five-month hiring process took place entirely over Zoom. And now that she has the job, Aluko said her first priority will be hiring a coach — hopefully in person.

“I have the ability to really start putting into practice all the things I’ve been thinking about over the past few months,” she said. “We have the advantage of time. We don’t kick off until next year and we have to utilize that time to really figure out — along with my strategy — how much we’re aligned, how much we can implement on recruitment, both internationally and domestically.”

“The future’s super bright, and I’m super honored to be part of trying to shape that future.”

The ideal candidate, she said, will not just be a big name, but someone who works well with people and is flexible tactically. Familiarity with the NWSL is also important.

Julie Foudy, a two-time World Cup winner and Angel City investor, was involved in Aluko’s hiring and said her youth and the fact she only recently retired will make it easier for her to relate to players.

“She understands player’s needs and issues. She’s played over here, she’s played internationally, she knows the game, she’s smart as hell, she’s a lawyer,” Foudy said. “So for us, we just thought it’s too good. It’s too good a fit.

“She understands what we’re striving for with this club. That it’s progressive in terms of pushing women’s sports forward in ways that are super meaningful and how to think differently and outside the box. All those things she gets. And we’ve told her all along, you’re coming into a family here and you’re going to have resources and help. There’s value to be able to lean on an Abby [Wambach] and Mia [Hamm] and say, ‘Hey, what do you think?’”

For Aluko the chance to work with legendary players like Foudy, Hamm and Wambach, who are also part of Angel City’s ownership group, was a “pinch-me moment.”

“These are my heroes,” she said.

“The future’s super bright and I’m super honored to be part of trying to shape that future.”

Denial of responsibility! TechiLive.in is an automatic aggregator around the global media. All the content are available free on Internet. We have just arranged it in one platform for educational purpose only. In each content, the hyperlink to the primary source is specified. All trademarks belong to their rightful owners, all materials to their authors. If you are the owner of the content and do not want us to publish your materials on our website, please contact us by email – [email protected]. The content will be deleted within 24 hours.
AlukoAngelbuildCityEniolaexclusivehirednews update
0
Share

Once Tech’s Favorite Economist, Now a Thorn in Its Side