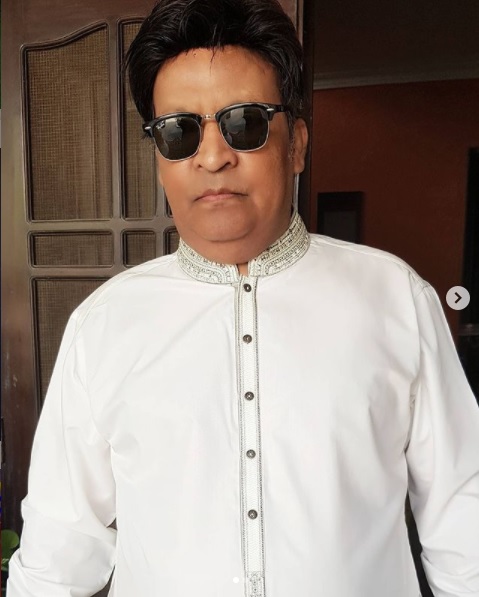 The veteran comic was travelling to the US for medical treatment. He had boarded an air ambulance but his condition deteriorated on the way and was moved to a hospital in Germany during a stopover. It is said that he had suffered a heart attack in August and haad undergone two bypass surgeries.

Sharif’s health had become a subject of national concern after he made a video appeal to Prime Minister Imran Khan to help me get visa to travel abroad for medical treatment. The federal government promised assistance post the video. Even the Sindh government sanctioned 40 million rupees for the treatment of the celebrated artiste.

It was on September 10 that Pakistani TV host and news anchor Waseem Badami posted a video of Umar Shareef on Instagram where he was seen requesting Pakistan Prime Minister Imran Khan for cancer treatment facilitation overseas. Soon, the video was shared by other artists. Even Daler Mehndi appealed to Prime Minister Imran Khan for Umer Sharif’s treatment. A medical board was then formed to decide if Sharif should be sent abroad or not. It was on September 16 that he was granted US visa.

Regarded as one of the greatest comedians in the sub-continent, Umer Sharif had started his career as a stage actor at the age of 14. This was back in 1974. Six years later, for the first time, he released his plays on audio cassettes. Acting, comedy, direction, production, he did it all. He was a very popular face on TV too. Having working the showbiz for close to 50 years, he has given many performances and live shows. Sharif was fondly called the ‘king of comedy’. He even received the Tamgha-e-Imtiaz for his contribution to the entertainment industry.

As soon as the news of demise broke, fellow artistes, fans offered condolences to the family on social media.

Alvida legend 🙏may your soul Rest In Peace 🙏🙏🙏 #UmerShareef pic.twitter.com/ks4vS4rdL0

I am so heart broken on the death of #UmerShareef sb. He was indeed the undisputed king of comedy and the legend of Pakistan. May Allah SWT forgive him, elevate his ranks and grant him Jannatul Firdaus, Ameen. Please recite Surah Fatiha for his soul. #Respect pic.twitter.com/c2DBElmNBE

Pakistan’s King Of Comedy Umer Sharif is no more. RIP LEGEND
We lost a great legendary actor and comedian Umer sharif the king of comedy May his soul rest in peace.💔
#UmerShareef pic.twitter.com/mXhxvJtj5y

Perhaps,the first stand up comedian of Asian belt #UmerShareef is no more!
Thank you for all the smiles legend!
There can’t be anyone like you💔
May Allah grant you the highest place in Jannat.
Inna lillah wa inna ilahi rajaun #RIPUmerShareef https://t.co/vL5IZ8UP0T

Denial of responsibility! TechiLive.in is an automatic aggregator around the global media. All the content are available free on Internet. We have just arranged it in one platform for educational purpose only. In each content, the hyperlink to the primary source is specified. All trademarks belong to their rightful owners, all materials to their authors. If you are the owner of the content and do not want us to publish your materials on our website, please contact us by email – [email protected]. The content will be deleted within 24 hours.
comedianentertainment newsEntertainment updateFamousGermanynews updatePakistanipasses
Share