Ronaldo left Manchester United this week in an acrimonious split after he said he felt betrayed by the club, but his coach and teammates have said the upheaval was having no impact on Portugal’s preparations for their campaign in Qatar. Portugal supporters, one with a mask of Portugal’s forward #07 Cristiano Ronaldo on his head, cheer ahead of the Qatar 2022 World Cup Group H football match between Portugal and Ghana at Stadium 974 in Doha on November 24, 2022.
| Photo Credit:
AFP

Portugal coach Fernando Santos partnered Ronaldo with Atletico Madrid’s Felix in attack while Danilo Pereira joined Ruben Dias in the centre of defence. In midfield, Santos chose an attacking formation with only Ruben Neves as an anchor. Portugal’s Cristiano Ronaldo scores a goal before play is brought back for a Ghana free kick.
| Photo Credit:
Reuters

Cristiano Ronaldo had the ball in the net and spurned two early chances in a goalless first half as Portugal dominated Ghana but were unable to make a breakthrough in their World Cup Group H match at the Stadium 974 on Thursday.

The 37-year-old Portugal captain might have had two goals inside the opening 15 minutes but missed both opportunities. He found the net from close range in the 31st minute but only after the referee had blown his whistle for an infringement against him. Portugal captain Cristiano Ronaldo shrugged off his bitter split with Manchester United to claim yet another record as he became the first player to score in five World Cups with a penalty to help steer his side to a nervy 3-2 win over Ghana on Thursday.

The first half of the Group H clash was forgettable apart from a couple of Ronaldo chances, but it burst into life after the interval as Portugal belatedly began their campaign. Ronaldo, a free agent after his second stint at Old Trafford ended abruptly on Tuesday, thumped home a dubiously-awarded penalty in the 65th minute after an innocuous coming together with Mohammed Salisu saw the referee point to the spot.

Ghana did nothing in the first half apart from defend deeply but gave their noisy bank of fans in the 974 Stadium something to cheer when Andre Ayew equalised in the 73rd minute. 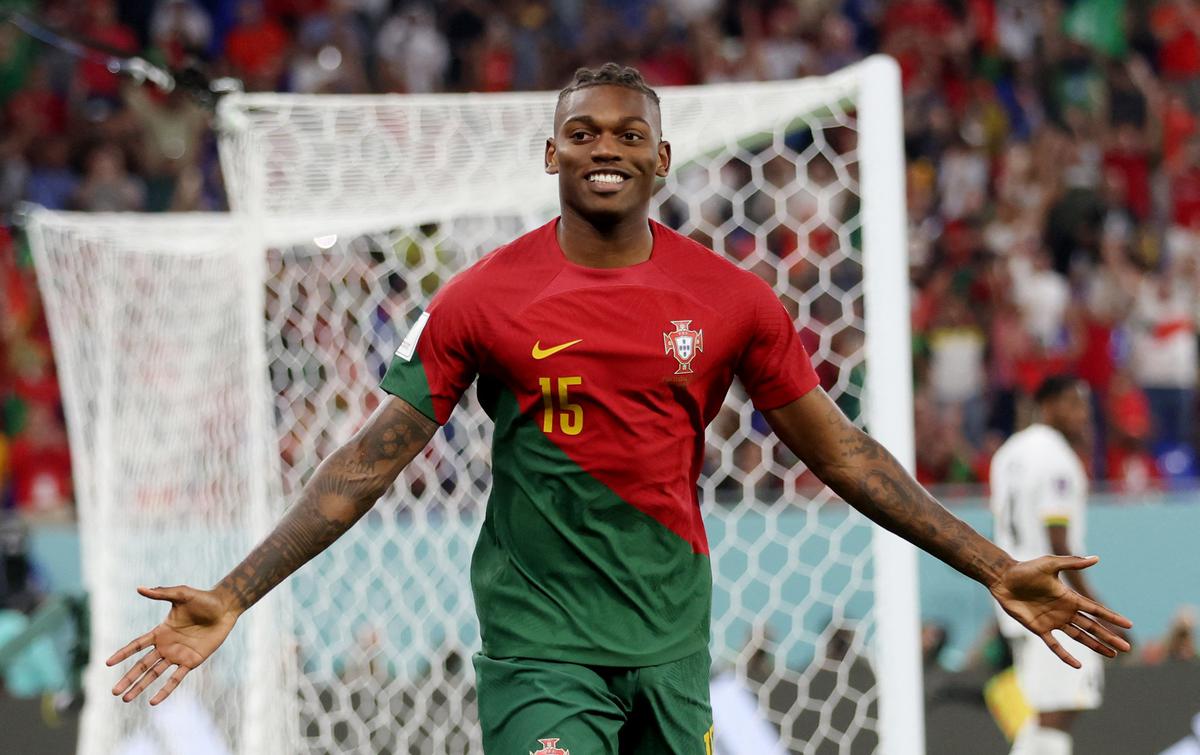 Joao Felix restored Portugal’s lead five minutes later, however, and Ronaldo then showed his class with a jinking run before sliding a pass to Rafael Leao to leave Ghana stunned.

Osman Bukari’s 89th-minute headed reply set up an anxious ending for Portugal but they survived nine minutes of stoppage time to win their opening game of a World Cup for the first time in their last four appearances.

Portugal players line up for the team photos prior to the FIFA World Cup Qatar 2022 Group H match between Portugal and Ghana at Stadium 974 on November 24, 2022, in Doha, Qatar.
| Photo Credit:
Getty Images Ghana players pose for a team photo ahead of the Qatar 2022 World Cup Group H football match between Portugal and Ghana at Stadium 974 in Doha on November 24, 2022.
| Photo Credit:
AFP

Denial of responsibility! TechiLive.in is an automatic aggregator around the global media. All the content are available free on Internet. We have just arranged it in one platform for educational purpose only. In each content, the hyperlink to the primary source is specified. All trademarks belong to their rightful owners, all materials to their authors. If you are the owner of the content and do not want us to publish your materials on our website, please contact us by email – [email protected]. The content will be deleted within 24 hours.
CupFIFAGhanahistorymatchnews updatePortugalReport
Share

What was the true human cost of the pandemic in Russia?

These games are heading to Xbox Game Pass this December…

All the world’s a stage: Actor Mohammad Ali Baig