Notice: amp_is_available was called incorrectly. `amp_is_available()` (or `amp_is_request()`, formerly `is_amp_endpoint()`) was called too early and so it will not work properly. WordPress is currently doing the `pre_get_posts` hook. Calling this function before the `wp` action means it will not have access to `WP_Query` and the queried object to determine if it is an AMP response, thus neither the `amp_skip_post()` filter nor the AMP enabled toggle will be considered. It appears the theme with slug `publisher` is responsible; please contact the author. Please see Debugging in WordPress for more information. (This message was added in version 2.0.0.) in /home/runcloud/webapps/techilive/wp-includes/functions.php on line 5313
 FIFA World Cup 2022 qualifiers: China football team trains for matches with Communist history lessons-Sports News , Firstpost - TechiLive.in 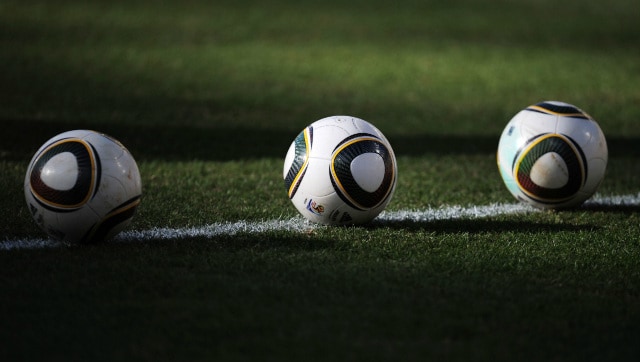 China return to their stuttering qualifying campaign with four matches on home soil, starting with minnows Guam on May 30 and culminating with a clash against group leaders Syria on 15 June.

China’s football team warmed up for a set of crucial World Cup qualifiers by receiving “patriotic education” and learning about the history of the ruling Communist Party.

President Xi Jinping has grand ambitions for China to host and even win a football World Cup, but the national side is currently ranked 77th and struggling to make the next edition, in 2022 in Qatar.

China return to their stuttering qualifying campaign with four matches on home soil, starting with minnows Guam on May 30 and culminating with a clash against group leaders Syria on 15 June.

With China due to mark the 100th anniversary of the Communist Party’s founding in July, the squad took time out from training under coach Li Tie on Tuesday to visit the site in Shanghai where the Chinese Communist Party held its founding meeting in 1921.

“In the view of the Chinese Football Association and coaching staff, it is crucial for the players to strengthen their sense of mission, responsibility and honour by receiving patriotic ideological education before participating in major competitions,” said the Beijing Youth Daily.

China’s five naturalised players in the squad — three born in Brazil and two in England — also made the trip to the museum.

China are currently eight points behind Syria in Group A, with only the group leaders guaranteed to reach the next stage of qualifying.

Chinese Football Association (CFA) president Chen Xuyuan says that the team needs to reach the next stage to convince people about the country’s wider ambitions.

“We often say we need to let the people see Chinese football is making progress,” he told Xinhua news agency in an interview published Wednesday.

“But if we get eliminated at this stage, the others will think we must be slipping instead of improving.”

Loading...
Denial of responsibility! TechiLive.in is an automatic aggregator around the global media. All the content are available free on Internet. We have just arranged it in one platform for educational purpose only. In each content, the hyperlink to the primary source is specified. All trademarks belong to their rightful owners, all materials to their authors. If you are the owner of the content and do not want us to publish your materials on our website, please contact us by email – admin@techilive.in. The content will be deleted within 24 hours.
ChinaCommunistCupFIFAFirstpostfootballhistorylessonsSports
0
Share

Three UK is putting up prices for customers, here’s how to avoid the extra cost