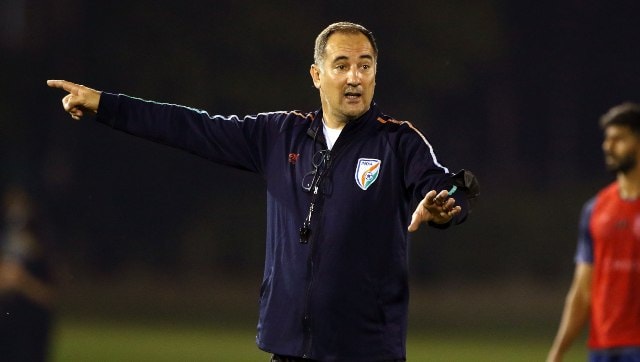 Ahead of the FIFA World Cup Qualifiers, Indian football coach Igor Stimac talks about India’s struggles in preparing for the tournament, his side’s shot at qualification for the Asian Cup in 2023 and more.

Three draws, two defeats and zero wins. That is what the Indian football team have written beside their name in Group E of the FIFA World Cup Qualifiers 2022, meaning that, in essence, as they head into one final fortnight’s worth of deciding fixtures, they are already out of contention for a berth in football’s showpiece tournament.

However, with these matches also serving as the qualification process for the AFC Asian Cup, there is still a lot at stake in the upcoming games against Qatar, Bangladesh and Afghanistan, and head coach Igor Stimac is cautiously optimistic of his side’s chances.

“I’m very confident that at the end of this journey, we will be in the AFC Cup. I know that our actual situation at the moment is far from ideal. The Qatar team is fully prepared. The Bangladesh side was playing in their league until recently. They will be much better prepared. Many players in the Afghanistan side are playing in Europe or in the United States, so they will be in full swing. All we can promise is that we will give everything in these matches. We’ll only learn how well we can perform when we step out onto the pitch, but I know we can do it,” said Stimac in a media interaction on Friday.

Of course, Stimac’s unwavering conviction in his side belies the numerous setbacks that have hampered their preparations for the qualifiers, chief among which is the COVID-19 pandemic, which has wreaked havoc in India over the past few months. The current state of the nation has forced this entire portion of the qualifiers to be moved to Doha, Qatar, a country that is currently better equipped to sustain a sporting bio-bubble with world-class facilities.

That’s not to say that the decision to move to Qatar has not been without its own problems. Stimac, whose side is currently in a quarantine-like situation after travelling, voiced his frustrations with the current arrangement, saying, “I’m well aware that Qatar is a host of the upcoming World Cup, and I know they have great facilities. I appreciate Qatar for allowing us to host these games here, but honestly, I have to say that, as a coach, I’m a bit disappointed in them. I know that we have had to change our plans due to COVID-19

“The pandemic situation is bad, and even in this situation, people are trying to do their best, but what I don’t understand is, why are we currently still in such a difficult position? Why do we not have the time to meet, to talk, to be together as a team? We’ve been tested three times, we were all negative, so why is it that we’re still having these issues. There’s also the fact that we have lost the advantage of two home matches, even though India has proven that it can successfully host sports in a bio-bubble,” he added.

To make matters worse, the Indian football team has been unable to conduct national camps and organise friendlies against other national teams, barring a couple of matches against Oman and the UAE in March. This lack of preparation has been further exacerbated by the fact that apart from Bengaluru FC and FC Goa players, who were in action in AFC tournaments, most other Indian footballers have been starved of regular football since the last week of February when the ISL’s league stage ended.

“We are in a situation which is far away from normal preparation for World Cup qualifiers. Most ISL matches ended in February. After that, we were able to organise just a couple of matches in Dubai. The situation now is that in the camp, we have a very limited number of players who will be able to play three matches in quick succession, which are the footballers from Bengaluru and FC Goa. The amount of time we have right now to prepare, it’s not enough, but we have to make do with what we have,” said Stimac.

“Our initial plan was to start the camp on 15 April, but we had to move it to 1 May. We wanted to play a few matches with local teams in Kolkata, but due to no one’s fault, owing to the pandemic it was cancelled. Before all this happened, if you told me how it would unfold, I wouldn’t have accepted it,” he added.

Amidst the numerous complications that Stimac and the Indian football side is faced with, there’s also some good news, in that talismanic captain Sunil Chhetri is available once again, after having missed the two friendlies in March due to COVID-19

When asked about his captain’s return to the squad, Stimac was quick to express his happiness, but the Croatian coach also stressed the need for caution, saying, “having Sunil Chhetri back is great for all of us. But we also need to be clever here, because there are three games in few days, so I need to be careful in where I use him. Obviously, the most important games for us are the ones against Afghanistan and Bangladesh. In a few days I should have a clearer picture of his levels, and how he can be best used.”

Despite the fact that India have had a pretty poor run in qualifying, Stimac reiterated his belief in his side and argued that qualifier results are often a far cry from what happens in a tournament using his country’s national side as an example. “Croatia is very good on the international stage. We finished third in one World cup, and in the last edition, we were runners up. But every time in qualifying, we fail to impress,” said Stimac.

“The qualifying is tricky, because there are a lot of different factors that go into these matches. It’s similar here, because of the pandemic, because of the league, because we couldn’t manage to give our players enough fixtures. No matter where we finish, we’re going to do our best, and when we qualify for the Asian Cup, and we get some time to work together, then we can judge our level fairly,” he concluded.

Loading...
Denial of responsibility! TechiLive.in is an automatic aggregator around the global media. All the content are available free on Internet. We have just arranged it in one platform for educational purpose only. In each content, the hyperlink to the primary source is specified. All trademarks belong to their rightful owners, all materials to their authors. If you are the owner of the content and do not want us to publish your materials on our website, please contact us by email – [email protected]. The content will be deleted within 24 hours.
AFCAsianCoachCupFIFAFirstpostIgorIndia
0
Share