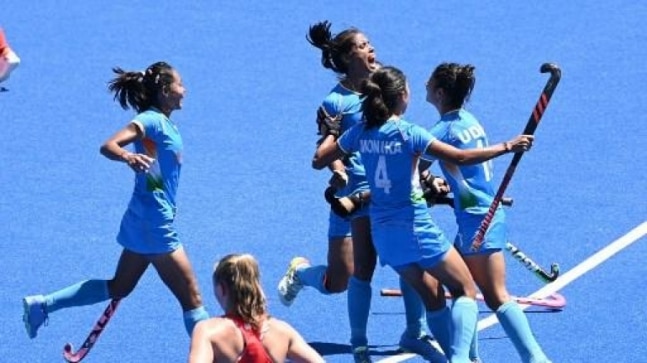 India women’s hockey team on Sunday, July 3 began their World Cup campaign with a 1-1 draw against England at Amstelveen in the Netherlands. Vandana Katariya shone as she got the equaliser for India in the second quarter.

England took the lead through Isabella Petter in the 9th and finished the first quarter with the lead. However, India fought back and put on a dodgy effort to end up with a point from their first match in Pool B.

India had headed into the World Cup on the back of a good showing in their debut season in the FIH Pro League wherein they finished 3rd.

It was a hard-fought contest in the first two quarters as there was hardly anything to separate the two teams. India got off to a jittery start, failing to convert a penalty corner as early as the first minute. England threatened to take the lead but star goalkeeper and captain Savita Punia denied them with a fine save.

India conceded in the 9th minute but they had three penalty corners soon after. However, India’s star drag-flicker Gurjit failed to convert them, denied by the goalpost in one of her three attempts.

Both the teams take a point home at their opening game of the FIH Hockey Women’s World Cup Spain and Netherlands 2022!

In the 28th minute, India secured their fourth penalty corner when Vandana sounded the board from a rebound.

India secured another penalty corner just at the stroke of half time, but once again, England goalkeeper Hinch made another brilliant save.

England started brightly after the change of ends but it was India who managed a shot at the goal, only to see Neha Goyal’s shot being saved by Hinch.

Thereafter, England dominated the rest of the third quarter but failed to translate their efforts into goals.

The neck-and-neck fight between the two teams continued in the fourth and final quarter but yielded no result.

In the 56th minute, India had a great chance to surge ahead but Sharmila Devi failed to connect from close range as the ball hit her foot.

India will play China in their next Pool B match on Tuesday. (WITH PTI Inputs)

Denial of responsibility! TechiLive.in is an automatic aggregator around the global media. All the content are available free on Internet. We have just arranged it in one platform for educational purpose only. In each content, the hyperlink to the primary source is specified. All trademarks belong to their rightful owners, all materials to their authors. If you are the owner of the content and do not want us to publish your materials on our website, please contact us by email – [email protected]. The content will be deleted within 24 hours.
CupDrawenglandFIHfih women's hockey world cuphardfoughthockeyIndia
Share

Loved One With Alzheimer’s? Make This July 4 ‘Dementia Friendly’

Shahid Kapoor’s kids Misha and Zain take a ride on…

Hogwarts Legacy To Get New Showcase At Gamescom 2022