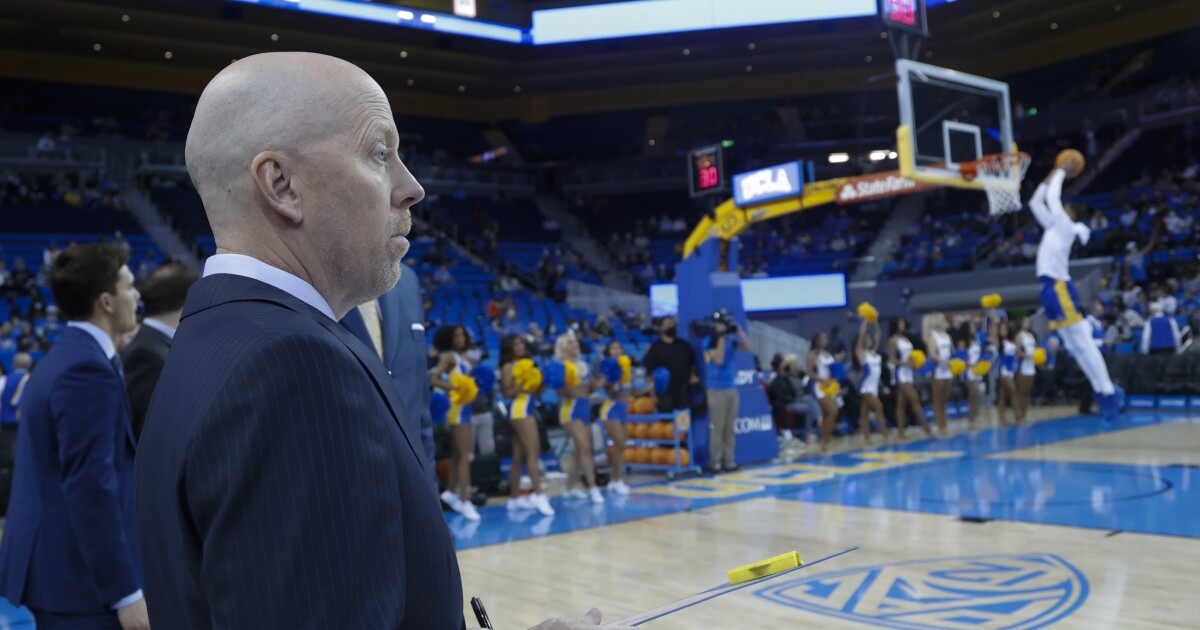 Chopsticks in one hand and cellphone in the other, Mick Cronin could be forgiven if he seemed a little distracted while eating sushi with his longtime girlfriend Monday night.

The UCLA basketball coach desperately needed to find games for his team. After finally getting every available player back at practice this week following a lengthy COVID-19 shutdown, the Bruins remain stuck in the longest in-season pause since at least the mid-1940s, with no assurances whom or when they might play next.

UCLA’s games for next week are now in doubt after Oregon and Oregon State postponed games in recent days because of virus issues.

After four hours of calling around in search of a game — even against nonconference opponents — Cronin learned that multiple teams within the Big West, West Coast and Mountain West conferences were also ravaged by the virus. Cronin, whose fifth-ranked Bruins (8-1 overall, 1-0 Pac-12) are the only Pac-12 team besides Washington that’s played just one conference game, isn’t being picky when it comes to possible opponents, saying he would play against a Division II team or one that’s not far removed from the 2020 NBA title.

“I know it would be a loss,” Cronin said, “but I’d take the Lakers at this point because our guys want to play.”

Another unprecedented possibility remains in play: Cronin said the Bruins could face USC, coming off its own lengthy COVID-19 pause, next week if the Oregon schools remain shut down. It would amount to a third meeting between the rivals this season, something Pac-12 officials said would be acceptable amid the scheduling difficulties of 2021 if teams needed to add games.

“I don’t care if we flip a coin for where the game’s at or if we play at the Crypto Center, it doesn’t matter to me,” Cronin said, referring to Crypto.com Arena. “So we’re at a point where you just gotta try to get games in.”

In a sign of the deteriorating circumstances amid the surging Omicron variant of the virus, Cronin spoke on Zoom during his first online interview with reporters since the Final Four last spring. His team has not played since Dec. 11, a 24-day pause that shatters the previous 15-day break between the 1991-92 season opener against Indiana and the next game against Long Beach State that stood as a school record going back to the 1945-46 season, the first for which game dates are available.

“I know it would be a loss, but I’d take the Lakers at this point because our guys want to play.”

Making matters all the more infuriating, most of UCLA’s rescheduling efforts are being handled by others. While the Bruins are free to schedule nonconference games, all Pac-12 games must be scheduled through the conference office. Cronin said UCLA could make suggestions to help satisfy its needs but ultimately was at the mercy of Pac-12 officials.

The Bruins currently have games to make up against Washington, Stanford, Arizona and Arizona State. Helping their cause could be recent Pac-12 rules adjustments that lowered the isolation and quarantine periods for players from 10 to five days while instituting a 90-day testing exemption window for anyone who tests positive for the virus.

UCLA’s ordeal started the morning of Dec. 15, when Cronin woke up feeling terrible and immediately went to get tested. The coach cracked that everyone started calling him Rudy Gobert after Cronin’s positive results that day led to the team’s shutdown in circumstances similar to Gobert’s positive test shutting down sports nationwide in March 2020.

Like their coach, UCLA players began to test positive in the following days, with some experiencing symptoms, and the team’s practice facility was shut down after more than 10 players and staff were sidelined with the virus, Cronin said. Currently, only three players have avoided contracting the disease.

The team resumed practice Dec. 27 with only a handful of scholarship players before the full roster, except for the injured Mac Etienne and Will McClendon, returned earlier this week. As could be expected, it was a struggle for those who had been stuck in quarantine over the holiday break. Cronin said a few players vomited in a garbage can after running sprints.

“Coming back, it was kind of tough,” said senior guard Jules Bernard, who used his body weight to do pushups and squats while in quarantine. “Legs were feeling a little weird. Also, our conditioning, it was tough, but throughout the days, throughout the workouts that we kept going through with coach, we sort of built our conditioning up, and now we’re back to practicing normally.”

Less ordinary was the sight of Chris Carlson, the associate athletic director who helps with scheduling, sitting in a courtside chair monitoring his phone for available opponents, hoping to call Cronin over with the good news that could end this horrible hiatus.

Denial of responsibility! TechiLive.in is an automatic aggregator around the global media. All the content are available free on Internet. We have just arranged it in one platform for educational purpose only. In each content, the hyperlink to the primary source is specified. All trademarks belong to their rightful owners, all materials to their authors. If you are the owner of the content and do not want us to publish your materials on our website, please contact us by email – [email protected]. The content will be deleted within 24 hours.
BiggestChallengeCovidfindingGameslengthynews updatePause
Share

Chhavi Mittal: I was ignorant about the importance of breast…