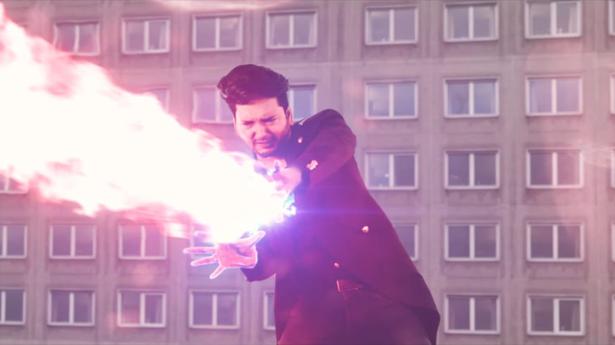 Advitya, the first superhero in Assamese cinema’s 88-year-old history, is a common man seeking job security and stability in life

Advitya, the first superhero in Assamese cinema’s 88-year-old history, is a common man seeking job security and stability in life

The trailer of the first Assamese superhero film, ‘Advitya’, directed by Arindam Sharma, was launched on September 9. The film is set to theatres on November 18.

Unlike most of his famous Hollywood counterparts, this superhero stars without a mask and sports a unique costume as he takes on the supervillain in a fancy outfit.

Director Sharma had uploaded the first look of ‘Advitya’ — a Sanskrit word for the Sun — in June 2019. However, multiple system snags made Mr. Sharma lose the edited film and all the backup footage, putting him through a phase of an emotional and financial crisis.

A “superpower” within “awakened” by his fictional superhero made Mr. Sharma pick up the pieces, tweak the script to include more action sequences, coordinate with the actors and start filming again by the dawn of 2020.

“After making up my mind to re-shoot the entire film, I informed all the actors. Apart from Niha Rani Das and Bikash Bora, none agreed to be part of the film again because of their professional commitments to other producers,” he had told The Hindu .

Some new actors, popular on Assamese TV channels, came on board. They include Arnab Ayan in the lead role.

The COVID-19 lockdown affected the second schedule of the shooting planned in March 2020. But he held on to complete the shooting and editing after a gap in October-November that year.

“The film is much tighter and more action-packed than the earlier version,” he said.

Advitya, the first superhero in Assamese cinema’s 88-year-old history, is a common man seeking job security and stability in life. The name is given by the people he saves from danger.

The superhero finds it difficult to manage his suddenly-acquired superpowers to take on the equally powerful supervillain, an evil scientist who derives strength from his laboratory experiments and the fury of nature.

“The underlying message of the film is that one should not go against time and nature, and that truth will always prevail over lies and good over evil,” Mr. Sharma said, declining to disclose the source of Advitya’s superpowers or how he overpowers the supervillain.

Apart from directing and scripting the film, he handled the cinematography along with two others – Kailash Duara and Nasirul Hussain. The choreography is by Sarat Bappi Saikia, while Dipu Sharma arranged the music.

The film, made under the banner of Krrishna Kraft Productions (India), is produced by Brojendra Nath Sarma. Popular singer Dikshu Sarma and Sanchita Sharma sang the songs penned and composed by Ankur Sharma.

Denial of responsibility! TechiLive.in is an automatic aggregator around the global media. All the content are available free on Internet. We have just arranged it in one platform for educational purpose only. In each content, the hyperlink to the primary source is specified. All trademarks belong to their rightful owners, all materials to their authors. If you are the owner of the content and do not want us to publish your materials on our website, please contact us by email – [email protected]. The content will be deleted within 24 hours.
AdvityaAdvitya movieAdvitya movie releaseAdvitya trailerAssameseAssamese FilmAssamese superhero filmentertainment news
Share

Believe the Fed…More PAIN on the Way for Stocks