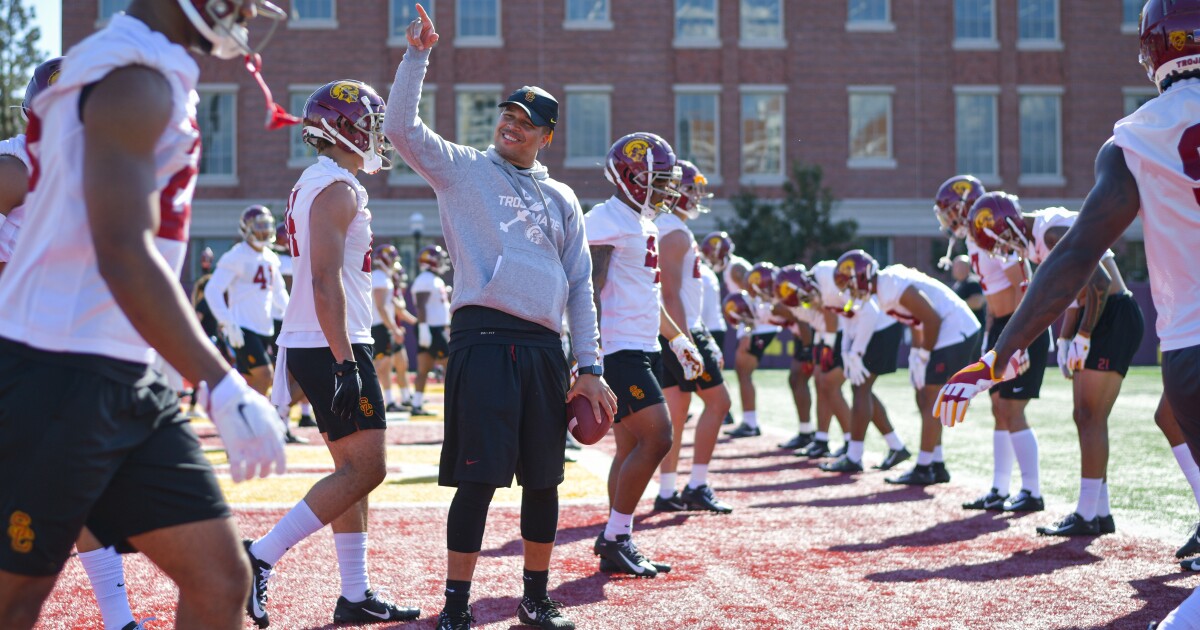 For the fourth time in the past eight years, an interim head coach will take the reins of USC’s football program.

Donte Williams was named USC’s latest interim head coach Monday after Clay Helton was fired following an embarrassing loss to Stanford in the second game of the season. Williams will lead the Trojans through at least the final 10 games of the regular season.

“Donte is an experienced and well-respected coach who is renowned for his ability to develop relationships with student-athletes, and I appreciate his willingness to take on this challenge,” athletic director Mike Bohn said in a statement.

Here’s what to know about the new man in charge at USC:

He’s made an immediate impact at USC

The 39-year-old Williams joined the Trojans staff in February 2020 as the cornerbacks coach and defensive pass game coordinator and added the associate head coach title less than a year later. In 2020, he led a USC secondary that gave up 216.3 passing yards a game, its fewest since 2013. That average ranked 43rd in the country, an improvement from 96th the year before.

In addition to his work on the field, Williams has earned a reputation as a top recruiter. For the class of 2021, he helped USC jump 50 spots in the national recruiting rankings and was credited as the primary recruiter for five-star prospect Korey Foreman. The defensive lineman was the No. 2 recruit in the nation and top prospect at his position.

While at Oregon, where he coached cornerbacks for two seasons before coming to USC, Williams was 247Sports’ top recruiter in the Pac-12 for the class of 2020 and the seventh-best in the nation. He lured top Southern California talent such as five-star linebacker Justin Flowe (Upland High) and Lancaster’s Mykael Wright to the Ducks, who have had the Pac-12’s top-rated recruiting class for three straight years, according to 247Sports.

He has history with previous USC head coaches

Williams, who started coaching in 2007 at L.A. Harbor College, was a graduate assistant under Sarkisian at Washington in 2010 and ’11 and worked as a summer coaching intern for the Seattle Seahawks in 2012. Carroll was in his third year as the Seahawks head coach and Williams used the experience to get his first full-time assistant job at the Division I level the following season when he joined San Jose State.

His other college coaching stops include Arizona (cornerbacks in 2016), Nebraska (cornerbacks, nicklebacks and dimebacks in 2017) and Oregon. He has never held a coordinator position.

As a player, Williams was a team captain and two-time defensive most valuable player at Culver City High, less than three miles away from the Coliseum. He continued his football career at Pasadena City College as a defensive back in 2002 before transferring to Syracuse, where he played one season that included five games and one tackle. He came back West to play for Idaho State, where he was an All-Big Sky first-team defensive back.

Loading...
Denial of responsibility! TechiLive.in is an automatic aggregator around the global media. All the content are available free on Internet. We have just arranged it in one platform for educational purpose only. In each content, the hyperlink to the primary source is specified. All trademarks belong to their rightful owners, all materials to their authors. If you are the owner of the content and do not want us to publish your materials on our website, please contact us by email – [email protected]. The content will be deleted within 24 hours.
CoachDonteInterimnews updatesports newssports updatetechi liveUSC
Share