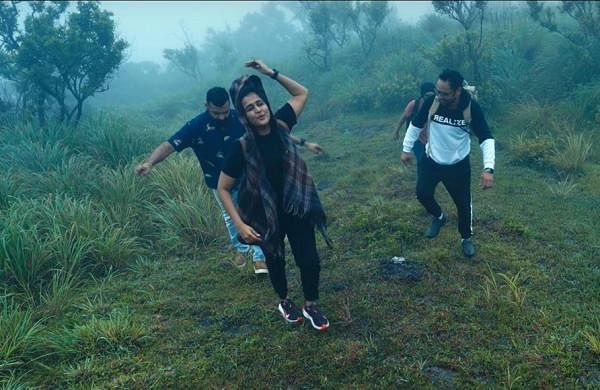 Fly with Me: An ode to the perfect road trip

KOCHI:  “Fly with me Fly with me now,” starts the cheery and melodious song by musicians Arjun Sasi, Ramya Nambeesan, Rahul Subrahmanian and Akhil J Chand. The happy music and cheerful lyrics will make it the perfect song to inspire the travel bugs to pack up and start their trip.

“As we were all stuck due to the pandemic and going through a difficult period, I wanted to make a song that would leave people in good spirits. Going for small trips with your close friends is one way to relax. As the state is gradually opening up, this is the perfect time to take that trip. That is what we wanted to convey in our song,” says musician Arjun, who is the brainchild behind the new peppy track.

The video as beautiful as the song is about four friends taking a spontaneous trip to an obscure hill station. “The location will remain a secret,” quips Arjun. “Many people are asking us where we shot our video. It is a less known location somewhere near Vagamon,” he adds.

Just like the trip in the video, the song was also a spontaneous idea that came to Arjun when he met Ramya at a recording studio. “I just started humming a tune and Ramya joined in. Akhil, who used to be a vocalist for the band Karnatrix, was also with us, and later Rahul also joined us while we were all humming and progressing. I wrote the English lyrics and everyone wrote their parts after brainstorming. Everything, including the shooting, was finished in 15 days,” says Arjun.

This song is also a comeback for Akhil, who was away from the public eye for around a decade. “After Karnatrix, he started teaching music. A mutual friend introduced us and this was the first time we were meeting in person,” Arjun adds.

The cheery number produced by Ramya and Arjun is on its way to becoming a favourite of music lovers. The picturesque video was shot by cinematographer Nirmal Gylson and directed by Lijo Earnest Leslie.

Denial of responsibility! TechiLive.in is an automatic aggregator around the global media. All the content are available free on Internet. We have just arranged it in one platform for educational purpose only. In each content, the hyperlink to the primary source is specified. All trademarks belong to their rightful owners, all materials to their authors. If you are the owner of the content and do not want us to publish your materials on our website, please contact us by email – [email protected]. The content will be deleted within 24 hours.
'Fly With Me'Akhil J ChandArjun Sasientertainment newsEntertainment updateFlynews updateode
Share

5 things to know before the stock market opens Friday