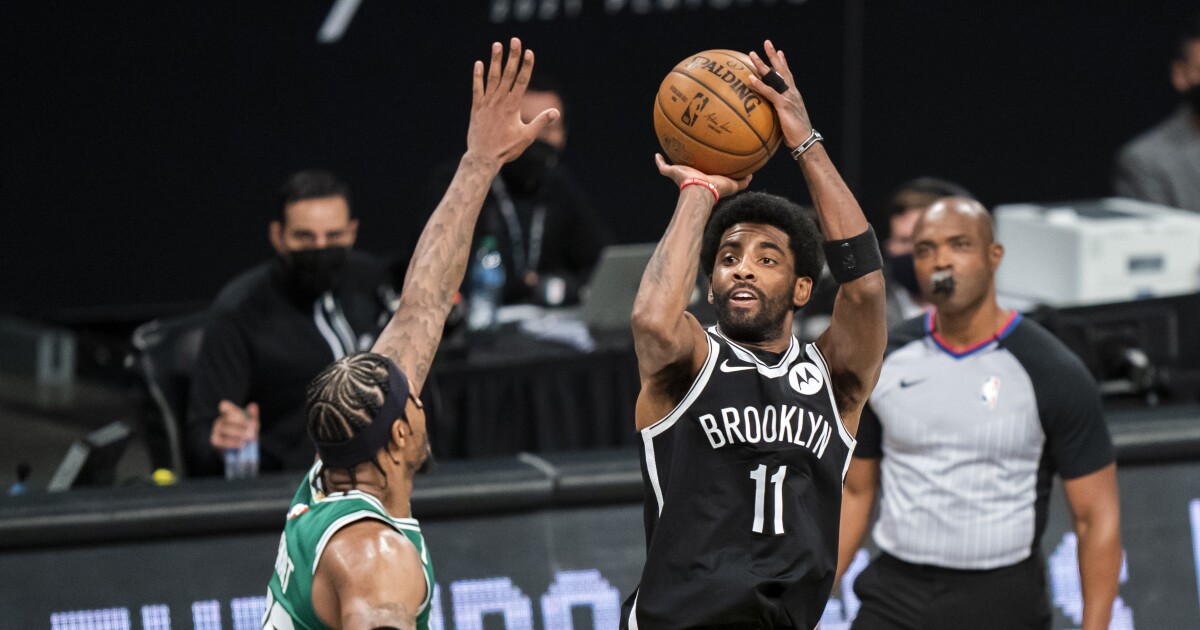 Kyrie Irving is hesitant about fan engagement with the Brooklyn Nets playoff series against the Boston Celtics moving to TD Garden on Friday.

“I mean it’s not my first time being an opponent in Boston, so I’m just looking forward to competing with my teammates and hopefully we can just keep it strictly basketball, there’s no belligerence or any racism going on, subtle racism and people yelling s— from the crowd,” he said Tuesday after Brooklyn took a 2-0 lead in the series. “But even if it is, it’s part of the nature of the game and we’re just going to focus on what we can control.”

Asked if he’s experienced harassment in Beantown before, he sounded incredulous that the question had to be asked.

“I’m not the only one that could attest to this, but it’s just,” he said with a long pause, “it is what it is.”

Irving played with the Celtics for two seasons when they went to the Eastern Conference finals and the semifinals. He was criticized by fans when he left to join Kevin Durant and the Nets after promising he’d re-sign.

TD Garden welcomed back fans in March after hosting games without them due to the COVID-19 pandemic. The first two matchups of the playoff series were played with fans at Barclays Center in Brooklyn.

Former Celtics center Kendrick Perkins played with Boston for eight seasons and won the 2008 championship with Paul Pierce, Kevin Garnett, Ray Allen and Rajon Rondo. He’s currently an analyst for ESPN and said that he disagreed with Irving’s comments.

“I also came back as an opponent of the Celtics and I played there with the Oklahoma City Thunder and the Cleveland Cavaliers and still never experienced any racism. I was always the guy that was all around the town and everything.”

Perkins suggested that Irving’s comments about racism were coming from a desire to create conversation and drama. Basketball is inherently competitive and fans react accordingly, he said, as was exhibited when Knicks fans called out Atlanta Hawks star Trae Young during a recent playoff game.

Current Celtic guard Marcus Smart said in a piece on the Players’ Tribune that he’s experienced racism as he’s been pulled over several times by police because of his car windows’ dark tint, which he made sure was legal, and most notably when he was called the N-word by a fan walking her son across the street after a game.

“[In] an instant, just like that, I was made to feel less than human,” he wrote. “I wasn’t a person to this woman. I was a form of entertainment. Nothing more. And, believe me, it took every ounce of restraint in my body not to curse her out. A few seconds later, I drove off. I just wanted it to be over.”

The Boston Red Sox have also faced incidents of racism. The team released a statement in June of 2020 acknowledging Torii Hunter’s no-trade clause and admitting they had seven reports of fans using racial slurs the previous season. In 2017, they issued a lifetime ban to a fan after he used a racial slur.

“I’m here to send a message, loud and clear, that the behavior, the language, the treatment of others that you’ve heard about and read about is not acceptable,” team president Sam Kennedy said at the time.

Denial of responsibility! TechiLive.in is an automatic aggregator around the global media. All the content are available free on Internet. We have just arranged it in one platform for educational purpose only. In each content, the hyperlink to the primary source is specified. All trademarks belong to their rightful owners, all materials to their authors. If you are the owner of the content and do not want us to publish your materials on our website, please contact us by email – [email protected]. The content will be deleted within 24 hours.
BostonCelticsfansGuardhearhopesIrvingKyrie
0
Share

Google takes another US health care group to the cloud