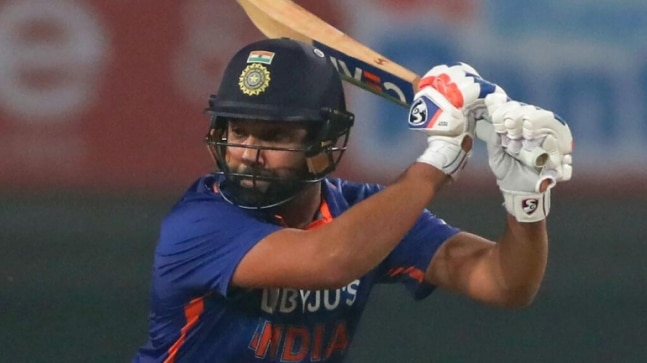 Freedom with which Rohit Sharma batted in his first full-time series as captain impressive: Gautam Gambhir

New Zealand tour of India: Former opener Gautam Gambhir said he was impressed with the way Rohit Sharmaa batted with a lot of freedom in his first series as India’s full-time T20I captain.

Captain Rohit Sharma showed he stays ahead of the game in 3-0 win over New Zealand: Gambhir (AP Photo)

Former India opener Gautam Gambhir lauded Rohit Sharma, saying the India captain did not get bogged down by the pressure of being the full-time captain and batted with a lot of freedom in the T20I series against New Zealand. Gambhir said Rohit showcased a lot of maturity in the way he batted at the top of the order in India’s 3-0 sweep of the Black Caps.

Rohit Sharma topped the run-scorers charts with 159 runs in 3 matches at a strike rate of over 150 in his first full-time series as T20I captain. Rohit went from the word go and it was evident with the way he hit a 31-ball 56 against New Zealand in he 3rd T20I in Kolkata. Rohit hit 3 sixes and 5 boundaries as India posted 184 after opting to bat, going against the norm of winning the toss and bowling on a dewy evening in Kolkata.

“He has done it (scoring big) year after year. It’s good that it’s coming while he is the full-time captain. Performing the way he did is a huge positive. Because sometimes captaincy can take the freedom out of your game but it didn’t happen with Rohit,” Gambhir told Star Sports.

“Yes, he has captained previously as well but wasn’t the full-time captain. This series showed his maturity and what he has done in this series is no surprise. But what was impressive is the way he played with a lot of freedom despite being announced as full-time captain,” he added.

Rohit took over as T20I captain from Virat Kohli who stepped down from the role after India’s early T20 World Cup exit. While Gambhir said the 3-0 sweep of New Zealand can’t be seen as India’s bounce back from the World Cup disappointment, he heaped praise on Rohit’s captaincy.

Gambhir said Rohit’s moves to bring in the spinners early in the 3rd T20I while defending a total in Kolkata shows his maturity as a leader and his ability to stay ahead of the game.

“Very, very good captaincy from Rohit Sharma. Bringing on Axar Patel in the 3rd over and getting Yuzvendra Chahal in the 4th over. These are small, small things, sometimes, you might just miss. But this is what captaincy is all about, always staying ahead of the game and he got the results.

“He is someone who won 5 titles in the IPL and now he has started off this series with a clean sweep. So this is what captaincy does in T20I cricket,” Gambhir added.

Rohit will not be part of the upcoming 2-match Test series against New Zealand as the star batter has been rested after a busy season of T20I cricket.

Denial of responsibility! TechiLive.in is an automatic aggregator around the global media. All the content are available free on Internet. We have just arranged it in one platform for educational purpose only. In each content, the hyperlink to the primary source is specified. All trademarks belong to their rightful owners, all materials to their authors. If you are the owner of the content and do not want us to publish your materials on our website, please contact us by email – [email protected]. The content will be deleted within 24 hours.
battedCaptainFreedomfulltimeGambhirGautamimpressivenews update
Share

My Boyfriend’s Parents Are Ignorant About Race. Why Should I Have to Teach Them?