Notice: amp_is_available was called incorrectly. `amp_is_available()` (or `amp_is_request()`, formerly `is_amp_endpoint()`) was called too early and so it will not work properly. WordPress is currently doing the `pre_get_posts` hook. Calling this function before the `wp` action means it will not have access to `WP_Query` and the queried object to determine if it is an AMP response, thus neither the `amp_skip_post()` filter nor the AMP enabled toggle will be considered. It appears the theme with slug `publisher` is responsible; please contact the author. Please see Debugging in WordPress for more information. (This message was added in version 2.0.0.) in /home/runcloud/webapps/techilive/wp-includes/functions.php on line 5313
 French Open 2021: Kei Nishikori says he feels like he’s ‘played five matches already’ after winning back-to-back five-setters-Sports News , Firstpost - TechiLive.in 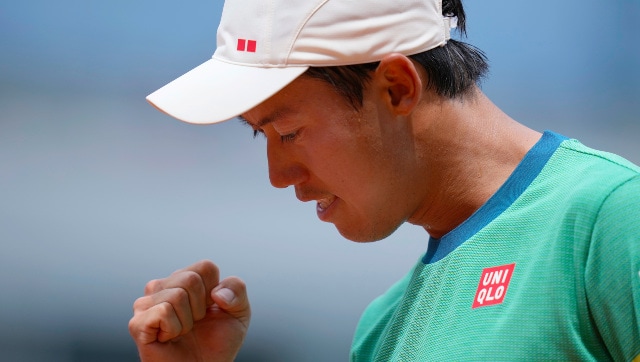 Paris: Kei Nishikori reached the third round of the French Open on Wednesday having won back-to-back five-setters over a total of eight hours on court and admitted: “I feel like I’ve played five matches already.”

In the first round, he also needed four hours to beat Italian qualifier Alessandro Giannessi.

“I feel like I have played five matches already. Trust me, I hate playing five sets. I don’t do it on purpose,” said Nishikori, a three-time quarter-finalist in Paris.

The statistics tell a different story.

After also playing two five-setters in his only two matches at the 2020 tournament, he now has a record at the French Open of nine wins and two losses over the full distance.

In all, he has won 11 of his last 12 five-setters and has the best winning percentage rate of all active players.

“Today, my energy level was not great. I had a four hours first match, four hours today,” he added.

“After the third set lost, I kept telling myself if I want to keep playing. There was no answer for me, but I just keep playing.

“My body said no, but my mind was just ‘keep playing’. So I was able to win the fourth set without thinking anything.”

Overall, Nishikori’s five-set record in his career stands at 26-7.

Key for him now is to press on and convert his undoubted stamina into a late period of sustained success in a career which has so far yielded 12 titles.

“Everybody tells me I have a good record. Sometimes I have to think that I have to keep building my record after going five sets.

“I think in fifth sets I’m really playing good tennis, more than any other sets.”

A former world number four, 2014 US Open runner-up Nishikori is playing in Paris on a ranking of 49, his lowest since 2011.

However, it has taken some serious hitters to subdue him in this European clay court season.

In between, he took a set off Rafael Nadal before losing in three sets in Barcelona.

“I only lost to top-10 players. You can say I’m not beating top-10 players right now, but I think things are getting much better for me,” said Nishikori.

“I think I’m on the way to the top 10 again. I’m really enjoying this moment.”

Regardless of how far he gets at the French Open — he plays Swiss qualifier Henri Laaksonen next — Nishikori won’t have a lot of time to dwell on his form.

His wife Mai is expecting their first child later this year.

“I’m still thinking about the name of my child. It will be a Japanese name,” he said.

Loading...
Denial of responsibility! TechiLive.in is an automatic aggregator around the global media. All the content are available free on Internet. We have just arranged it in one platform for educational purpose only. In each content, the hyperlink to the primary source is specified. All trademarks belong to their rightful owners, all materials to their authors. If you are the owner of the content and do not want us to publish your materials on our website, please contact us by email – admin@techilive.in. The content will be deleted within 24 hours.
backtobackfeelsFirstpostfivesettersSportsFrenchhesKeimatches
0
Share