Notice: amp_is_available was called incorrectly. `amp_is_available()` (or `amp_is_request()`, formerly `is_amp_endpoint()`) was called too early and so it will not work properly. WordPress is currently doing the `pre_get_posts` hook. Calling this function before the `wp` action means it will not have access to `WP_Query` and the queried object to determine if it is an AMP response, thus neither the `amp_skip_post()` filter nor the AMP enabled toggle will be considered. It appears the theme with slug `publisher` is responsible; please contact the author. Please see Debugging in WordPress for more information. (This message was added in version 2.0.0.) in /home/runcloud/webapps/techilive/wp-includes/functions.php on line 5313
 G7 summit: Jill Biden shares message of love on UK trip with POTUS Joe Biden - TechiLive.in 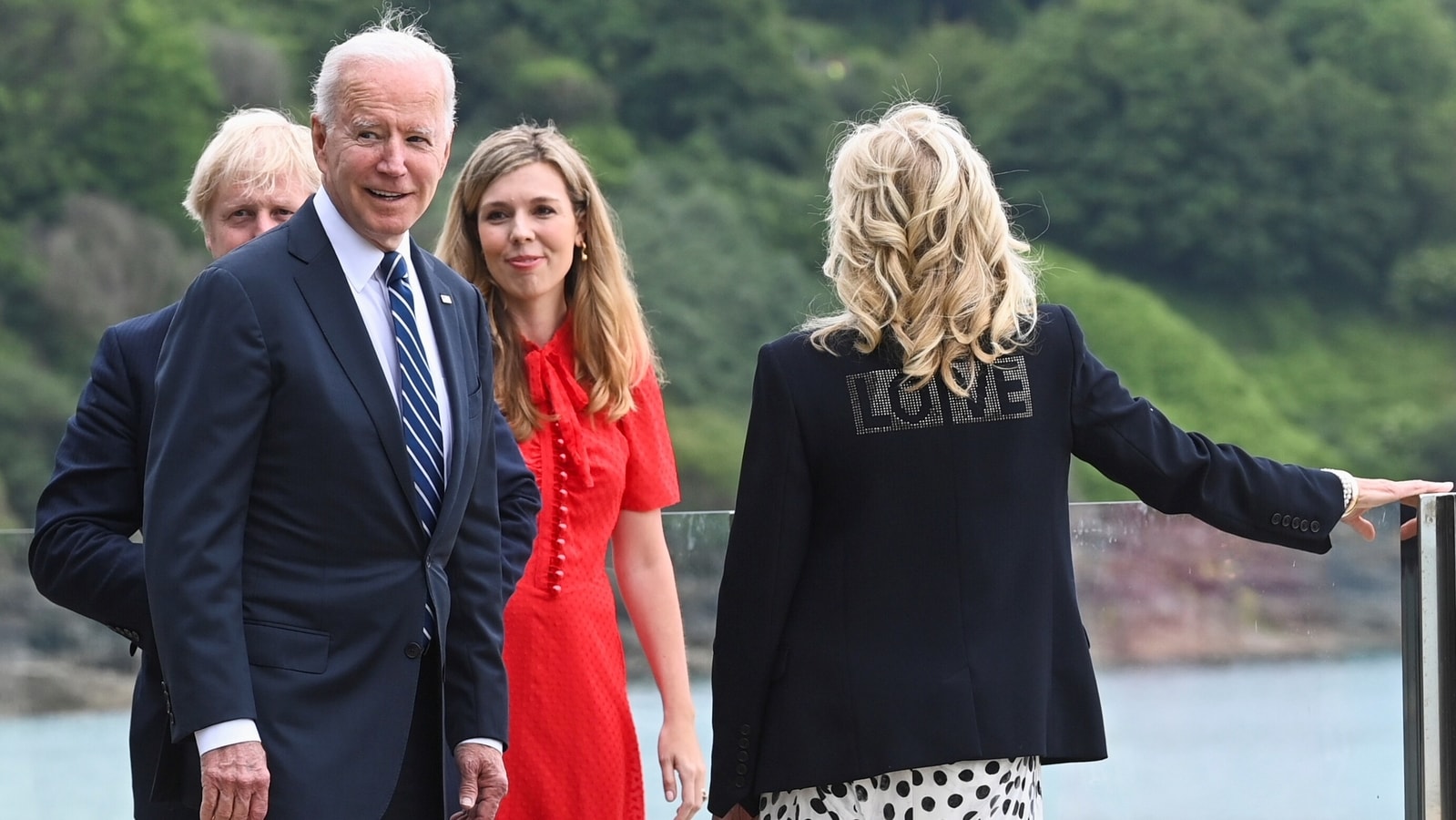 First Lady of the United States Jill Biden has been using her sartorial choices to spread messages long before her husband Joe Biden was elected as the President of the United States and most recently Doctor Biden spread the message of love through her choice of outfit as she accompanied her husband for an overseas trip to meet British Prime Minister Boris Johnson and his wife Carrie on Thursday ahead of the G7 Summit.

The present FLOTUS’s fashionable outings have been the subject of much scrutiny simply because of the fact that her predecessor, Melania Trump, former President of the United States Donald Trump’s wife, managed to offend people all across the globe with a number of her outfits. Whether it was because they were splashed with a rude message (remember the “I Really Don’t Care, Do U?” jacket Melania wore in June 2018 during a trip to the border of Mexico before heading to a detention center for migrant children, although she changed out of the jacket before heading to the center – her choice was widely criticised) or because of the whopping price tag on most.

For meeting with the Johnsons, Jill Biden wore a black jacket that had the word ‘Love’ emblazoned on it in silver beading, she was earlier seen in it when she kicked off her husband’s presidential campaign more than two years ago. Another thing Melania Trump did not do: repeat outfits.

And when reporters on the sidelines asked her why she chose the particular outfit, FLOTUS Biden explained, “We’re bringing love from America,” she said, adding, “This is a global conference and we are trying to bring unity across the globe and I think it’s needed right now, that people feel a sense of unity from all the countries and feel a sense hope after this year of the pandemic.”

The black Victor Strass Amour Blazer with rhinestone detailing by Parisian fashion house Zadig and Voltaire is no longer available on the brand’s site, but a white version is currently available for $448. priced at jacket

Several Twitter users heaped praises on FLOTUS for her choice of attire. One comment read, “It’s so refreshing to have a smart, kind, involved FLOTUS again, and that jacket is ON POINT.” And some even made side by side comparisons between Jill and Melania.

Biden is known for her sartorial choices, often donning bright pastels or eye-catching patterns for her outings on behalf of the Biden administration. She is rarely seen without a kitten heel or stiletto boot, adding height to her petite frame.

And this isn’t the first time she’s sent a direct message with her clothes: During a campaign trip to Iowa late last year, Biden wore black skinny jeans bearing the word “VOTE” down each calf.

The first lady is accompanying her husband during the UK leg of his foreign trip, where she’ll participate in spouses’ activities at the Group of Seven summit, and a couple of events focused on military veterans and their families. She joined Johnson’s wife, Carrie Johnson, for tea Thursday and tweeted a photo of the two and Johnson’s son, Wilfred, on the shore.

On Friday, Jill Biden, a community college English professor, and Kate Middleton, the Duchess of Cambridge, and mother of three young children, plan to appear together at a preschool in Cornwall and participate in a roundtable discussion on early childhood education, the White House said.

Joe Biden is on his first overseas visit as president. Along with his participation in the G-7 summit and a NATO summit in Brussels, he will meet with Russian President Vladimir Putin. Jill Biden said her husband had been “studying for weeks” for the trip and joked that he is “overprepared.”

“Joe loves foreign policy. This is his forte,” she said. The Bidens are set to meet with Queen Elizabeth II on Sunday at Windsor Castle. The first lady told reporters “that’s an exciting part of the visit for us.”

Denial of responsibility! TechiLive.in is an automatic aggregator around the global media. All the content are available free on Internet. We have just arranged it in one platform for educational purpose only. In each content, the hyperlink to the primary source is specified. All trademarks belong to their rightful owners, all materials to their authors. If you are the owner of the content and do not want us to publish your materials on our website, please contact us by email – admin@techilive.in. The content will be deleted within 24 hours.
Loading...
BidenDonald Trumpduchess of cambridgeentertainment newsEntertainment updateG7 summitJillJill Biden
0
Share

What to Do This Weekend