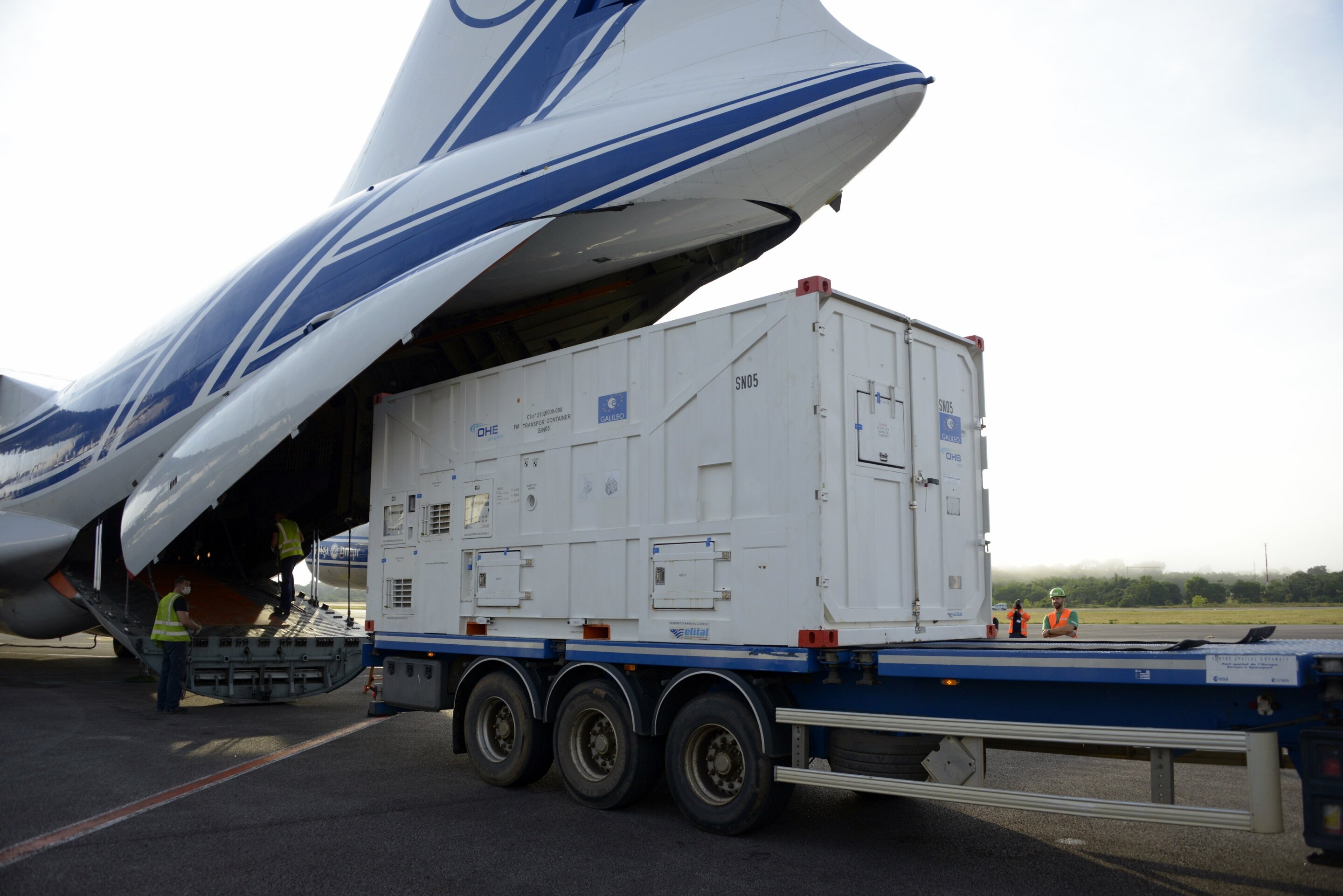 The latest pair of Galileo satellites have touched down at Europe’s Spaceport in French Guiana, ahead of their launch together next month.

Cocooned safely within environmentally controlled containers, the satellites were carried across the Atlantic aboard an Ilyushin cargo carrier. The satellites left ESA’s ESTEC Test Centre in Noordwijk, the Netherlands, on Tuesday morning heading for Liège Airport in Belgium. From here they flew to Cayenne in French Guiana via a stop in Oporto Airport in Portugal, arriving at their final destination on Wednesday evening local time.

Once unloaded from the aircraft, the satellites were then driven through the tropical dusk to the cleanroom surroundings of the spaceport nearby Kourou, where they could be safely unpacked to begin the satellite launch campaign.

These two satellites are the first of the last batch of Galileo First Generation satellites, known as ‘Batch 3’, made up of 12 satellites in all. They are built by OHB SE in Bremen, Germany, with their navigation and search and rescue payloads contributed by Surrey Satellite Technology Ltd in Guildford in the UK.

Before being cleared for launch, the satellites have gone through rigorous testing at ESA’s ESTEC Test Centre, the largest satellite test facility in Europe—their last stop before flying to South America.

These two satellites will be launched together aboard a Soyuz launcher from Europe’s Spaceport in French Guiana. The launcher incorporates a Fregat upper stage, which will carry them to their planned 23 222 km altitude medium-Earth orbit.

These satellites will add to the 26-satellite Galileo constellation already in orbit and delivering Initial Services around the globe.

Next month’s lift-off will be the 11th Galileo launch in 10 years. Two further launches are planned for next year, to allow Galileo to reach Full Operational Capability in its delivery of services, to be followed by the launches of the rest of the Batch 3 satellites which are currently all undergoing pre-flight testing.

In parallel to Batch 3’s completion of Galileo First Generation deployment, the new Galileo Second Generation satellites, featuring enhanced navigation signals and capabilities, are already in development with their deployment expected to begin by 2024.

Galileo is currently the world’s most precise satellite navigation system, serving more than two billion users around the globe.

Galileo in place for launch

Denial of responsibility! TechiLive.in is an automatic aggregator around the global media. All the content are available free on Internet. We have just arranged it in one platform for educational purpose only. In each content, the hyperlink to the primary source is specified. All trademarks belong to their rightful owners, all materials to their authors. If you are the owner of the content and do not want us to publish your materials on our website, please contact us by email – [email protected]. The content will be deleted within 24 hours.
arriveEuropesgadget updateGalileoSatellitesSpaceporttech newstech update
Share