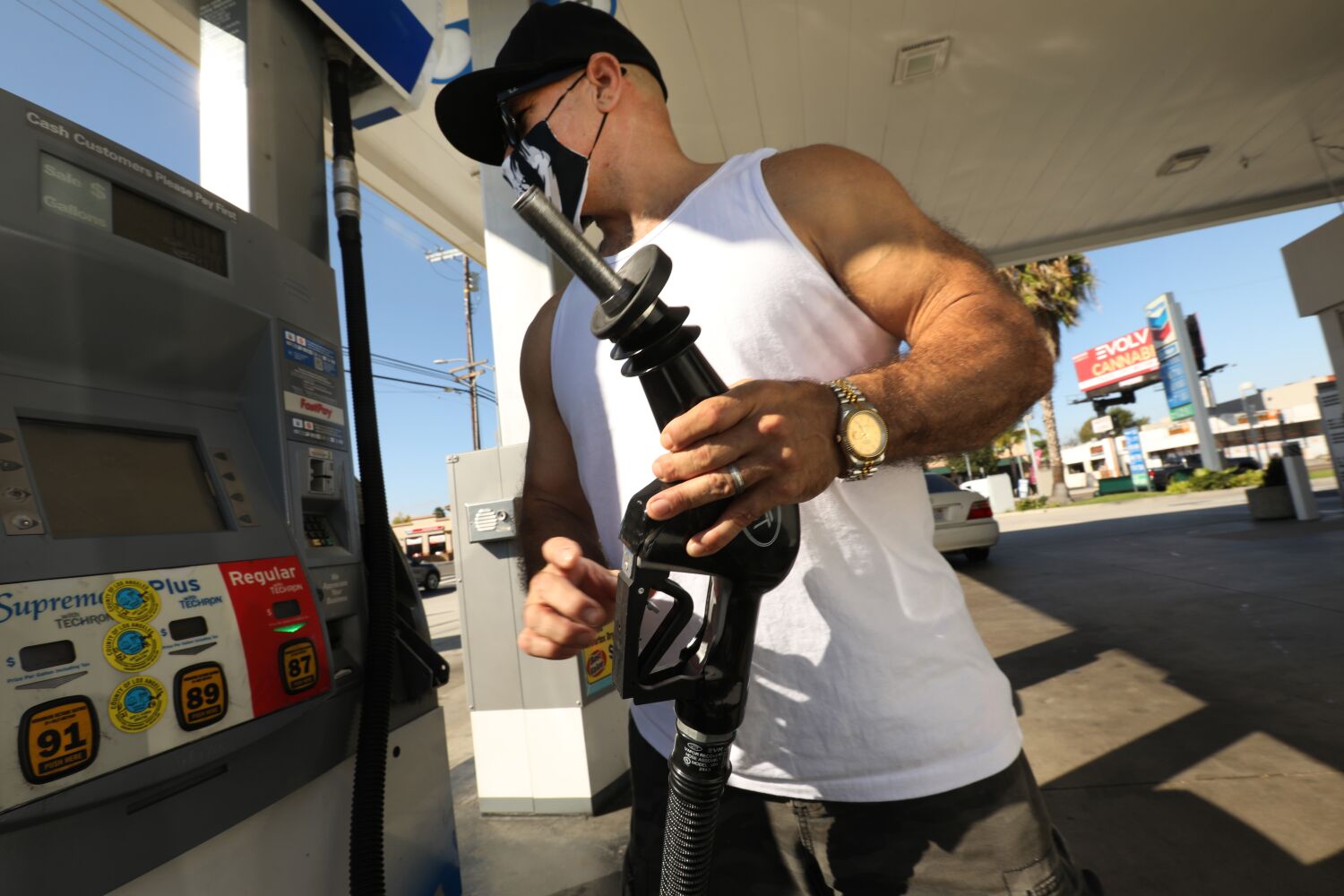 The average price for a gallon of gas in Southern California has dropped nearly 70 cents from a month ago, and holiday travelers can thank a volatile global oil market and seasonal shifts in production costs for lower prices heading into the Thanksgiving holiday.

The shift in prices arrives just as 4.5 million Southern Californians are expected to travel during the holiday break, the Automobile Club of Southern California announced Tuesday. Analysts predict this will break an all-time record for Thanksgiving travel and marks a slight increase from last year.

Nationwide, roughly 54.6 million travelers are expected to travel, with Orlando and Anaheim projected to be the most popular destinations. The top destinations for Southern Californians will be Las Vegas, San Diego, Sedona, the Grand Canyon and Yosemite, among other locations, the Auto Club predicted.

For the second year in a row, Southern California drivers will pay the highest gas prices ever for this time of year, but prices have dropped from several weeks ago.

The average price for a gallon of gas is $5.43 in California and $5.50 in the Los Angeles-Long Beach area. Although this continues a trend of declining gas prices, it’s still far above the average of $4.67 a gallon at this time a year ago, AAA said.

Last month, gas prices spiked to $6.15 a gallon in California thanks to several factors.

In early October, gas prices jumped after shutdowns at several California oil refineries that produce a specific grade of fuel for the state. Californians typically pay roughly 30 cents extra for a gallon of gas because of environmental fees, higher production costs and taxes.

On the global stage last month, major oil producers pledged to reduce crude oil production by 2 million barrels a day. And over the last week, gas demand increased while total domestic gasoline stocks decreased by nearly a million barrels, according to the U.S. Energy Information Administration.

Although all of those factors should point to higher costs at the pump, the overall costs have declined because the oil market has yielded more crude oil and less demand.

Earlier this month, the federal government announced the release of crude oil from the Strategic Petroleum Reserve, increasing the supply in the market.

On Friday, China’s health commission announced its strict COVID-19 policies, which delayed the reopening of its economy and in turn is expected to reduce the nation’s demand for oil, Reuters reports.

The cost of crude oil, the main ingredient in gasoline, has also stayed within a narrow price range of $85 to $92 a barrel for several weeks.

Prices drop because fewer people tend to hit the road when temperatures drop, Venegas said, and refineries have switched over to producing their cheaper winter blend meant for colder temperatures.

Still, AAA expects this Thanksgiving to be one of the busiest seasons for automobile travel in recent years. It’s still unclear whether that will drive demand and prices.

“Prices are going down, but we’ll have to wait and see if they stay down heading into Thanksgiving,” Venegas said.

Other parts of the country are enjoying lower prices than California, with stations in 13 states selling gas for less than $3 a gallon, according to AAA.

“More gas stations could follow, which may be a big help with road trip budgeting as Thanksgiving approaches,” AAA spokesperson Andrew Gross said in a written statement.

Denial of responsibility! TechiLive.in is an automatic aggregator around the global media. All the content are available free on Internet. We have just arranged it in one platform for educational purpose only. In each content, the hyperlink to the primary source is specified. All trademarks belong to their rightful owners, all materials to their authors. If you are the owner of the content and do not want us to publish your materials on our website, please contact us by email – [email protected]. The content will be deleted within 24 hours.
business newsBusiness updateCaliforniansdivegasHitnews updatenumber
Share

World Children’s Day: How To Introduce Children To eLearning