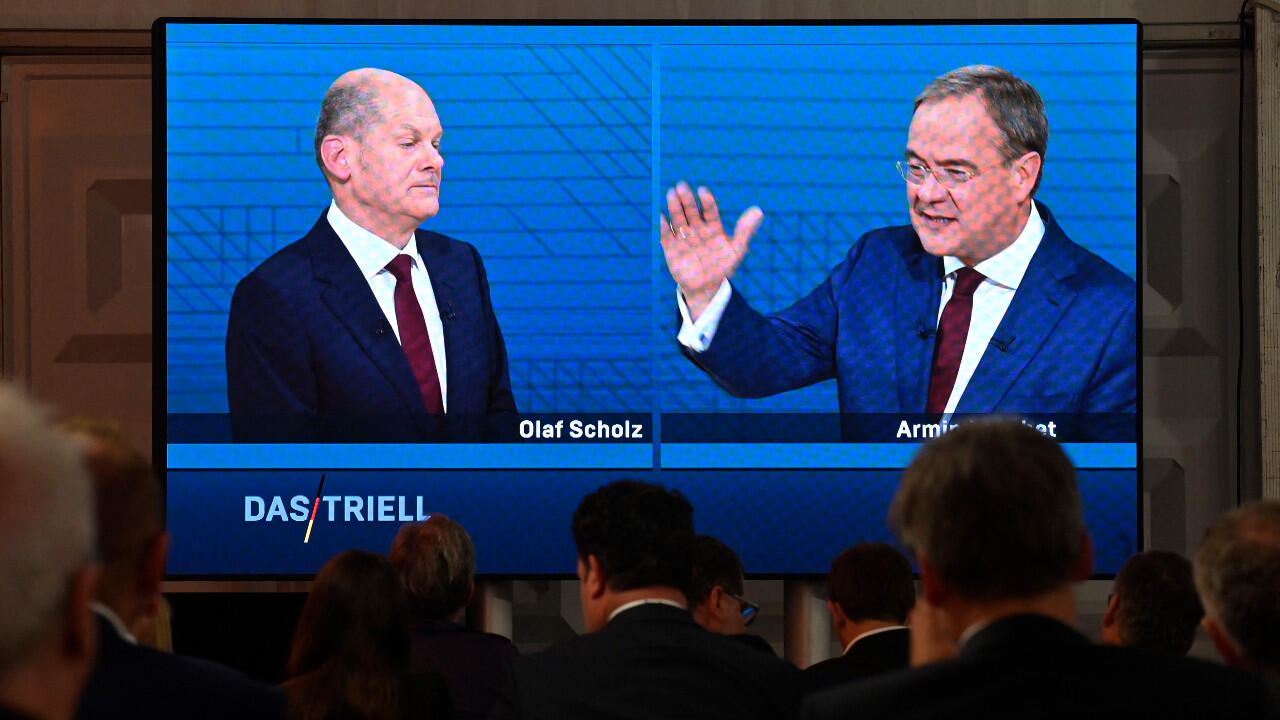 Armin Laschet, the struggling chancellor candidate from Angela Merkel’s conservative camp, went on the attack against his centre-left rival in a lively election debate Sunday, but failed to deliver a knock-out blow.

With just two weeks to go before a general election, the gaffe-prone Laschet put in a fiery performance in the second of three primetime debates, all but ignoring Annalena Baerbock, the Green party’s chancellor hopeful, to focus his blows on Finance Minister Olaf Scholz from the Social Democrats (SPD).

Scholz, often described as wooden and uncharismatic, appeared mostly unfazed, briefly interrupting Laschet to accuse him of “twisting the facts” when he sought to highlight Scholz’s perceived oversight failings in recent financial scandals.

In a snap poll after the 90-minute debate, viewers declared Scholz the winner, while Baerbock scored highest on likeability.

Germany’s topselling Bild daily said Laschet had needed to emerge as the clear victor to keep his chances of succeeding Merkel alive.

“There was a fierce exchange of punches, but no one went down,” it wrote.

The verdict is likely to add to growing nervousness in Merkel’s CDU/CSU alliance, whose popularity has been falling steadily.

Surveys put support for the CDU/CSU at a record-low of around 20 percent, while Scholz’s SPD has come from behind to take the lead at 26 percent.

The Greens are polling at around 15 percent, in what has become an unexpectedly suspenseful election in Europe’s top economy, with a number of possible coalition outcomes.

One of the most contentious debate topics was Scholz’s refusal once again to outright reject teaming up with the radical-left Linke party to possibly form a three-way coalition with the Greens.

The CDU/CSU bloc has always rejected partnering with the Linke, a party that wants to disband NATO and is currently polling at six percent.

Laschet, 60, said “citizens need clarity” on the issue. But Scholz said it was the voters who decided the election and that any potential coalition partner would have to agree that “NATO is indispensable”.

Some of the liveliest exchanges came during the section on the climate emergency. Scholz and Laschet accused each other’s parties of holding back change during their years in government together, either through a lack of investment in clean energy or unnecessary red tape.

Baerbock came out swinging on the Greens’ flagship issue, saying both men were more concerned with pointing fingers than finding solutions.

She said the next government “will be the last that can still actively influence the climate crisis” and called for Germany to phase out coal by 2030, eight years earlier than the end date set by Merkel’s government.

There was more agreement between the candidates on the coronavirus pandemic, with all three urging more Germans to get vaccinated.

Laschet, the premier of North Rhine-Westphalia state, has been on a downward spiral following a series of missteps, including being caught on camera laughing during a tribute to victims of Germany’s deadly floods in July.

Scholz meanwhile has run an unexciting but error-free campaign.

As vice-chancellor and guardian of the nation’s finances, the 63-year-old has positioned himself as the continuity candidate and the natural heir to Merkel’s legacy — despite hailing from a different party.

Merkel, who is bowing out after 16 years in power and had vowed to stay out of the election battle, has stepped into the arena recently to help boost Laschet’s fortunes.

She visited a flood-hit region with Laschet and used a speech in parliament this week to cast him as the best choice to succeed her, saying he stood for “stability” and “centrism”.

Laschet himself has said the election will be fought until polling day — but with record numbers of postal ballots expected because of the pandemic, his fate could be sealed sooner.

Denial of responsibility! TechiLive.in is an automatic aggregator around the global media. All the content are available free on Internet. We have just arranged it in one platform for educational purpose only. In each content, the hyperlink to the primary source is specified. All trademarks belong to their rightful owners, all materials to their authors. If you are the owner of the content and do not want us to publish your materials on our website, please contact us by email – [email protected]. The content will be deleted within 24 hours.
Armin LaschetblowsCandidatesDebateElectionsEuropeGermanGermany
Share

How to make 2022 the year that Finally! Let’s leave behind burnout