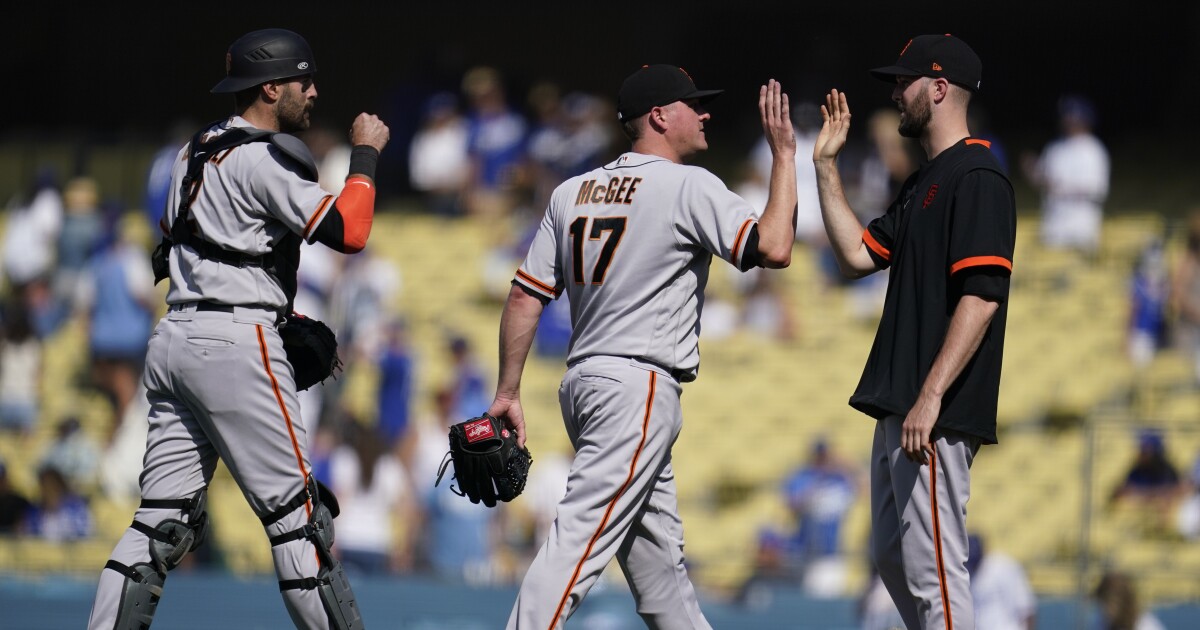 What’s “great” for baseball in the eyes of manager Dave Roberts might not be so good for the Dodgers, whose path to a ninth consecutive National League West title has become far more treacherous than expected.

Two months into the season, it’s clear that what most thought would be a two-team division race between the Dodgers and San Diego Padres is going to be a three-team dogfight, the San Francisco Giants reasserting themselves by winning three of four weekend games in Chavez Ravine.

The Giants ambushed left-hander Clayton Kershaw for five runs and seven hits, including two homers, in the first four innings of Sunday’s 5-4 victory over the late-charging Dodgers, giving them three wins in a row over a team that swept a three-game series in San Francisco last weekend.

“It’s not like our guys need incentive to play good baseball, but I think for the fans, for everyone, it’s good to have each game matter,” Roberts said of the dynamics of a three-team race. “These are three good ballclubs playing good baseball, so we’re gonna have our hands full all year long.”

The bulk of Sunday’s game was an exercise in futility and frustration for the Dodgers, who managed two hits in six innings and struck out seven times against Giants ace Kevin Gausman, who improved to 6-0 with a 1.40 ERA, the second-best ERA in baseball behind Chicago White Sox right-hander Lance Lynn (1.37).

Mixing a four-seam fastball that averaged 95.1 mph and touched 97.3 mph with a nasty split-fingered fastball, Gausman threw 62 of his 72 pitches for strikes and had only one baserunner to reach second.

The right-hander joined Jack Coombs (1910 Philadelphia Athletics), J.R. Richard (1979 Houston Astros) and Johan Santana (2004 Minnesota Twins) as the only pitchers in the modern era with eight consecutive starts of at least five strikeouts and no more than one run yielded.

Highlights from the Dodgers’ 5-4 loss to the San Francisco Giants on Sunday.

“He was hitting his spots,” Dodgers infielder Max Muncy said. “I think he threw, what, [10] balls today? So he was pounding the zone, his stuff was good, he was getting ahead from the start, and it’s a difficult task for the hitters when the pitcher is constantly getting ahead. He kept us off-balance for sure.”

Not until Gausman aggravated a left-hip injury while fielding Matt Beaty’s dribbler to end the sixth inning did the Dodgers muster a threat.

Austin Barnes doubled and Muncy clubbed his 100th career homer to right-center off reliever Zack Littell in the eighth, pulling the Dodgers to within 5-2, and Cody Bellinger reached on an error and Albert Pujols homered to left off closer Jake McGee to make it 5-4 in the ninth.

But McGee struck out pinch-hitter Will Smith looking and got Barnes to fly to right for his 12th save.

“They’re a good team,” Kershaw said of the Giants. “They’re swinging the bats well, you get Buster [Posey] back, he’s playing maybe better than he ever has, and that’s a big addition for them. Their starting pitching has been really good. They have a lot of good pieces over there on both sides of the ball.”

Kershaw entered with a 24-13 record, 1.79 ERA and 360 strikeouts in 49 career starts against San Francisco, the best ERA of any pitcher with a minimum of 120 innings against the Giants franchise since 1920 and the second-most strikeouts against the club behind Warren Spahn (417).

But he was no match Sunday for the Giants, who combined for 19 runs and 22 hits in their previous two wins and wasted no time pounding the Dodgers again.

Austin Slater and Donovan Solano opened the game with singles and advanced on a wild pitch. Kershaw struck out Wilmer Flores and got Evan Longoria to hit a run-scoring groundout to shortstop.

Mauricio Dubon then crushed a first-pitch fastball high off the left-field foul pole for a 3-0 lead, punctuating his two-run homer with a Trevor Bauer-signature sword plunge as he crossed the plate.

Kershaw left a 2-and-0 slider up in the third to Slater, who drove a solo homer to center for a 4-0 lead. After Dubon’s single and Steven Duggar’s walk in the fourth, Gausman slapped an RBI single to left for a 5-0 lead.

“A lot of people might have counted the Giants out,” Roberts said. “We didn’t.”

Denial of responsibility! TechiLive.in is an automatic aggregator around the global media. All the content are available free on Internet. We have just arranged it in one platform for educational purpose only. In each content, the hyperlink to the primary source is specified. All trademarks belong to their rightful owners, all materials to their authors. If you are the owner of the content and do not want us to publish your materials on our website, please contact us by email – [email protected]. The content will be deleted within 24 hours.
continueDodgersGiantsLargeloomnews updateracerow
0
Share