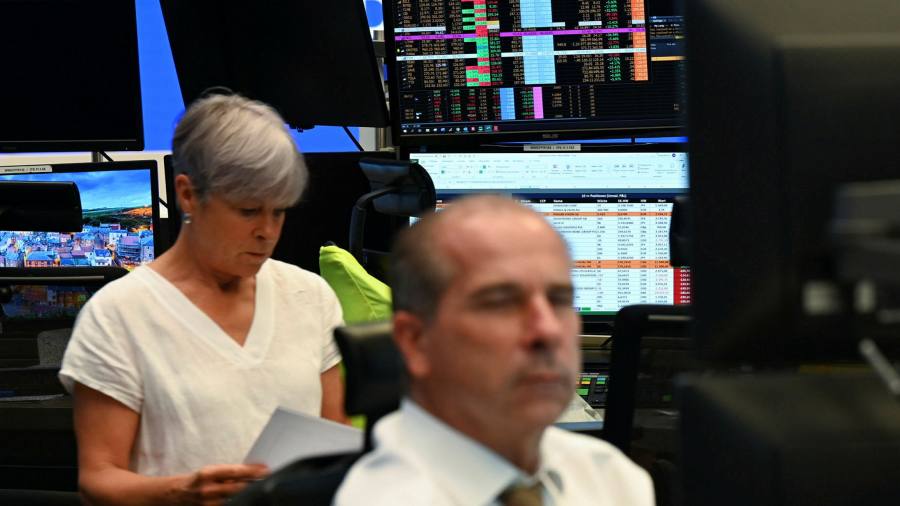 Sign up to myFT Daily Digest to be the first to know about Equities news.

Stocks on Wall Street climbed to record highs and commodities rallied on Monday, reversing last week’s losses as the US granted full approval to the BioNTech/Pfizer jab.

The S&P 500 advanced 0.9 per cent, with almost three-quarters of the companies in the index rising. Meanwhile, the technology-heavy Nasdaq Composite rose 1.6 per cent.

Oil and other commodity prices bounced back following last week’s sell-off. Brent crude, the international oil benchmark, rose 5.5 per cent to settle at $68.75 a barrel. Traders pointed to falling Covid-19 cases in China as a signal that social restrictions in the world’s largest consumer of commodities may soon ease. Brent ended July at $76.33.

Metal prices also recovered from a decline last week, with nickel rising by 1.6 per cent and copper by 2.3 per cent. Metals were finding support from rising share prices in Asia and a weaker dollar, according to analysts at Commerzbank.

Goldman Sachs said demand for metals remained strong and inventories were falling in China at a rapid pace. The bank said it expected copper prices to rise to $10,620 a tonne in the fourth quarter from the current price of $9,218 a tonne.

The rally in commodity prices came as the US dollar weakened about 0.6 per cent against a basket of six world currencies.

“I don’t think anything from market behaviour tells us there’s anything new happening,” Anthony Collard, managing director at JPMorgan Private Bank, said of the rally. “It’s a mean reversion to a degree.”

European purchasing managers’ index data — broad gauges of corporate health — painted a mixed picture across markets. In the UK, the manufacturing and service sectors faced a sharp deceleration in growth, falling to the lowest level in six months.

Data from Australia also showed that the country’s private sector had lost steam in August, because of the spread of the Delta variant of coronavirus and resulting lockdown.

By contrast, eurozone business activity grew at one of the fastest rates in the past 20 years, with employment continuing to grow at the same rate as in June, a 21-year high.

“Although the spread of the Delta variant caused widespread problems across the region, curbing demand and causing further supply issues, [businesses] benefited from virus containment measures easing to the lowest since the pandemic began,” said Chris Williamson, chief business economist at IHS Markit.

The big event for investors this week is the annual central bankers’ symposium at Jackson Hole, Wyoming, starting on Thursday. Interest in the meeting of monetary policymakers has been heightened by disagreements within the Federal Reserve over the speed at which it should trim its purchases of government debt. The yield on the benchmark 10-year US Treasury note was little changed at 1.25 per cent on Monday, roughly at the midpoint of the range it has traded over the past month.

The Fed’s $120bn-a-month asset purchase programme has been a vital pillar to the market’s recovery since the shock of coronavirus lockdowns more than a year ago. Minutes from the US central bank’s latest policy meeting published on Wednesday last week indicated that a majority of Fed officials believed that the withdrawal of the stimulus programme could start later this year.

But analysts believe that rising case numbers due to the spread of the Delta variant, and subsequent international slowdowns, may cause a more gradual tapering announcement than initially expected.

“I just have a really, really hard time believing that at Jackson Hole you’re all of a sudden going to have [Fed chair] Powell come out and say we’re totally tapering,” said Stephanie Link, a portfolio manager at Hightower Advisors.

Denial of responsibility! TechiLive.in is an automatic aggregator around the global media. All the content are available free on Internet. We have just arranged it in one platform for educational purpose only. In each content, the hyperlink to the primary source is specified. All trademarks belong to their rightful owners, all materials to their authors. If you are the owner of the content and do not want us to publish your materials on our website, please contact us by email – [email protected]. The content will be deleted within 24 hours.
Loading...
commodityEducation newsEducation updateequityGlobalKickMarketsnews update
Share