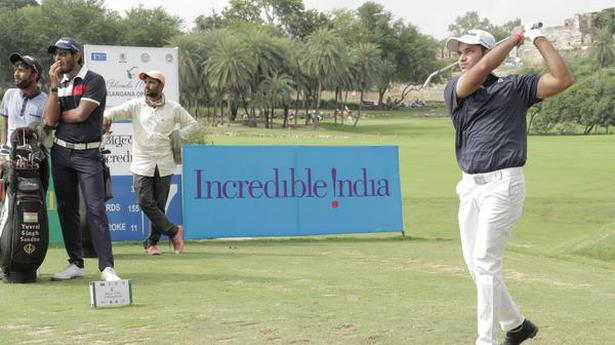 Gurugram’s Manu Gandas came with a brilliant 10-under 58 to build a substantial five-shot lead at 17-under 122 in the second round of the Vooty & Haldi-sponsored Golconda Masters Telangana Open golf championship here on Friday.

Noida’s Amardeep Malik was in second place at a total of 12-under 127 following his second round of seven-under 61.

Playing his first event at the HGA since turning pro, Kartik Sharma, the 21-year-old rookie from Gurugram, came up with a splendid, error-free nine-under 59 to be placed tied third with a total of 10-under 129 along with Chandigarh’s Yuvraj Singh Sandhu, who shot a six-under 62 on Friday.

The cut was applied at even-par 139. Fifty professionals and two amateurs made the cut.

Gandas (64, 58), the joint leader in round one, had five birdies and two bogeys on the front-nine.

Gandas, still looking for his maiden title, was on fire on the back-nine with seven birdies which included some exceptional chip-putts, a great recovery from the bunker on the 17th and a 25-feet conversion on the 18th. The 25-year-old ended the day in style with birdies on his last five holes.

Malik (66, 61) made his way up from overnight tied fourth to second place after a round punctuated by an eagle, six birdies and two bogeys. Malik made a sensational chip-in from the rough for an eagle-two on the 14th.

Bengaluru-based Chikkarangappa, the 2019 champion, was tied fifth at nine-under 130 along with Mysuru’s Yashas Chandra.

PGTI Order of Merit leader Karandeep Kochhar of Chandigarh was seventh at eight-under 131.

Olympian and defending champion Udayan Mane missed the cut as he tallied three-over 142 for two rounds to be placed tied 68th.

Denial of responsibility! TechiLive.in is an automatic aggregator around the global media. All the content are available free on Internet. We have just arranged it in one platform for educational purpose only. In each content, the hyperlink to the primary source is specified. All trademarks belong to their rightful owners, all materials to their authors. If you are the owner of the content and do not want us to publish your materials on our website, please contact us by email – [email protected]. The content will be deleted within 24 hours.
Loading...
clearGolcondaGolfmanuMastersnews updateShotssizzles
Share