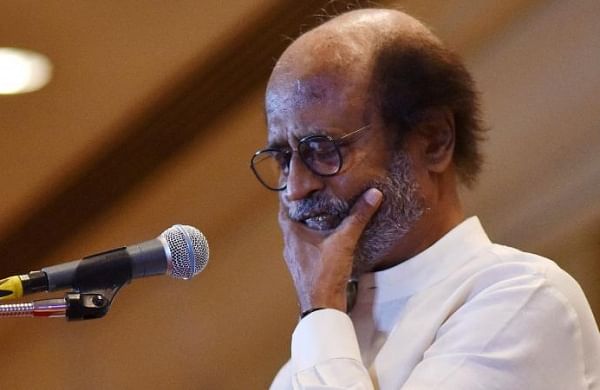 CHENNAI: Though Rajinikanth fans have welcomed the announcement of conferring the Dadasaheb Phalke award to the actor, they also sense some kind of conspiracy behind the decision.

With only six days left before Tamil Nadu heads to the polls, the Centre naming Rajinikanth for the award on Thursday has invited much criticism over the timing of the announcement.

Some feel the timing of the award announcement degraded its value and in turn underestimated the actor’s eligibility for receiving the honour.

One RB Krishnan, a senior functionary of Rajinikanth fans club, told TNIE that Rajinikanth fans always believe that his name alone and that his influence over the masses, as well as public support for him is greater than any other recognition.

“They have announced the award for 2019. If they indeed want to respect Rajinikanth, they should have announced the award in 2020, at least two months ago or after the polling for the Assembly election. The announcement just a few days before voting would degrade the credibility of the award and perceived as though the honour is being bestowed upon him at this time to attain political mileage,” Krishnan lamented.

Another Rajini fan, ‘Great Vasu of Southern districts’, told Express that Rajinikanth fans are well aware of the political reasons behind the announcement.

The actor has the calibre to reach such a position, but the BJP doesn’t possess the civility to honour him for his talents and achievement, sans any expectation, the fan said.

He further recalled that a section of Rajinikanth fans are already riled up against the saffron party since they believe that the actor backtracked from launching his political party due to pressure from the BJP.

Another fan recalled, “Rajinikanth was given a state award for best actor in October 1989. The award distributing function was held just a month before the general election in 1989. During this function, Rajinikanth spoke, after receiving the award from then Chief Minister M Karunanithi, “I would like the DMK alliance to get a thumping victory in forthcoming Parliamentary election and my fans fully supported the alliance. And I express my advance wishes for their election victory.”

Following this, his fans worked hard to favour the DMK alliance across the state. But, the alliance lost all seats, except Nagappattinam, where DMK’s ally CPI won the seat. It was the first Lok Sabha election in which the DMK drew a blank after the party entered into electoral politics. Hence, there is no guarantee that the announcement of the Dadasaheb Phalke award would bring votes to the BJP combine, the fan said.

Veteran journalist and editor of the online portal ‘Aram’, Savithiri Kannan told Express: “There is politics in everything, be it the announcement of the award and its timing, or wishes from leaders across party lines. People know everything. Rajinikanth has already freed himself from BJP’s trap and he too must be aware behind the reason of this announcement.”

However, the question of whether Rajinikanth would extend his support to any party in the upcoming polls or which way his fans would vote for remains unclear. For now, Rajinikanth has made it clear that he will not enter the political fray.

Loading...
Denial of responsibility! TechiLive.in is an automatic aggregator around the global media. All the content are available free on Internet. We have just arranged it in one platform for educational purpose only. In each content, the hyperlink to the primary source is specified. All trademarks belong to their rightful owners, all materials to their authors. If you are the owner of the content and do not want us to publish your materials on our website, please contact us by email – [email protected]. The content will be deleted within 24 hours.
awardBJPDada Saheb Phalke awarddecisionentertainment newsEntertainment updategoodhisDadasaheb
0
Share

Word of the Day: obtrusive

Opioids like ‘Lean’ Permeate Hip-Hop Culture, but Dangers Are Downplayed