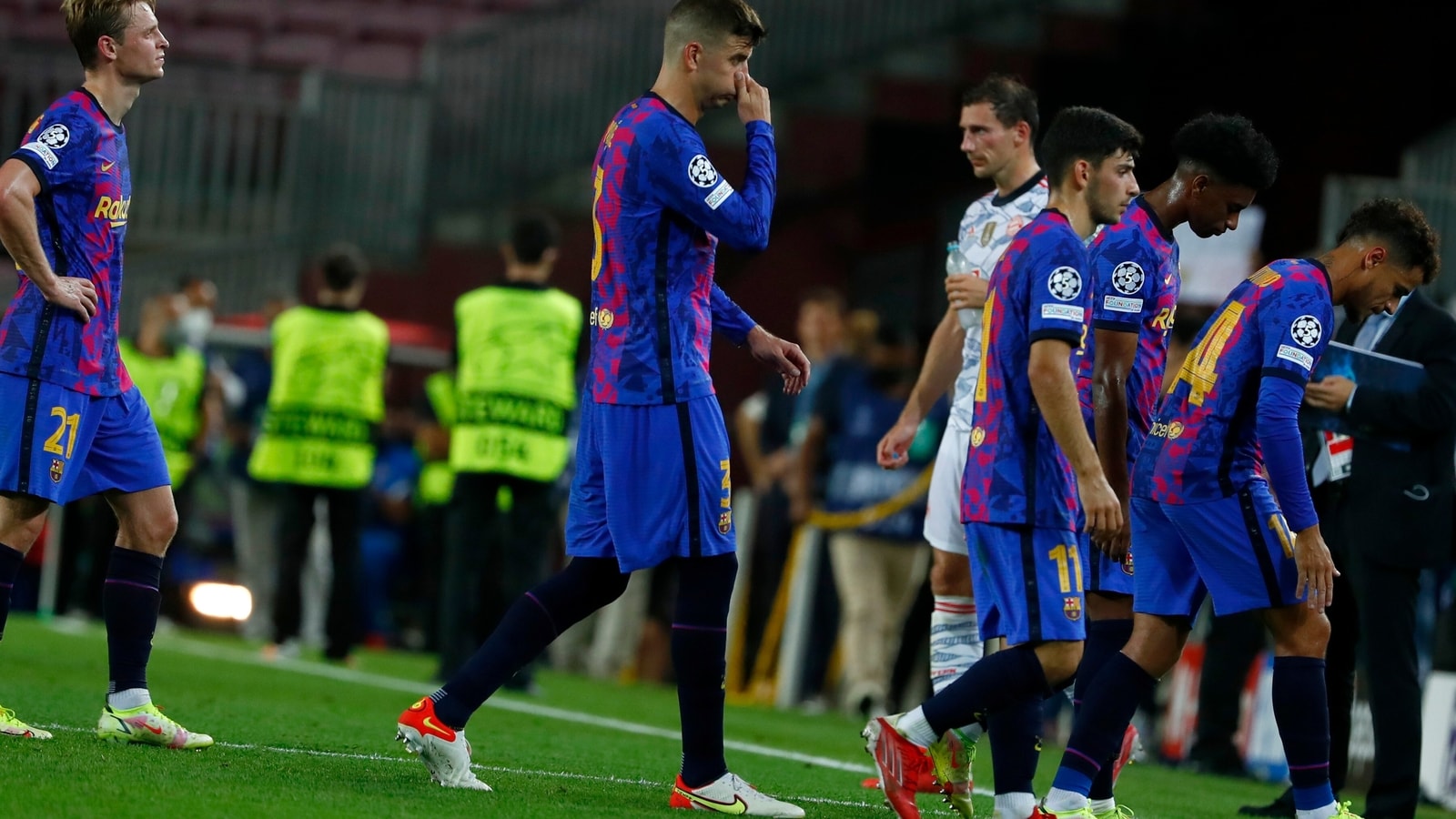 Barcelona needs to brace for some tough times ahead while adjusting to the post-Lionel Messi era.

That message was clear after the 3-0 loss at home to Bayern Munich in the Champions League on Tuesday, the team’s first defeat since Messi left amid the club’s financial struggles.

“It is what it is, we are what we are now,” veteran Barcelona captain Gerard Piqué said after the Catalan club was outplayed from the start at the Camp Nou. “It’s a complicated season.”

Looking nothing like the team that used to thrive when Messi was on the field, Barcelona couldn’t get a single shot on goal the entire match and saw Bayern constantly threaten the other way.

“We would like to have competed better, but this is what we have right now,” Barcelona coach Ronald Koeman said. “I can’t complain about our attitude, we tried our best. But there is a difference in talent and a difference between a team that has played a long time together and our team with lots of young players. It is difficult to accept, but we have to keep working.”

The loss came more than a year after the embarrassing 8-2 debacle against Bayern in the quarterfinals of the Champions League two seasons ago, a defeat that began exposing Barcelona’s struggles on and off the field.

Koeman, who was hired shortly after the rout against Bayern, said it will take time for Barcelona to return to a top level.

“Our young players have a lot of potential, in two or three years they will be playing much better,” Koeman said. “But right now, it is what it is.”

Koeman also lost Antoine Griezmann in the transfer window last month, when the team’s main addition was Netherlands forward Memphis Depay. The club added veteran Sergio Aguero but he is among the several players recovering from injury, along with youngsters Ousmane Dembélé, Sergiño Dest and Ansu Fati. Koeman used 18-year-old Yusuf Demir and 17-year-old Gavi on Tuesday. Pedri González, also 18, was a starter.

“I look at the positive fact that we had some 18-year-old players coming into the match,” Piqué said. “It’s our reality now.”

Barcelona will have to rely a lot on its youngsters as it tries to recover from dire financial conditions caused by the pandemic and poor management. The Catalan club wasn’t able to hand Messi a new contract and saw him leave for free to Paris Saint-Germain, one of the main contenders for the Champions League title this season.

President Joan Laporta asked fans to keep supporting Barcelona and said he needs time to get the club back on track.

“I am upset and disappointed as all of you are,” he said in a video message. “I need to tell you that what is happening is one of the situations that we expected. And I ask for your patience, and that you continue supporting our team. I also ask for your trust in us, the people who are managing the club. We need your trust and time, and do not doubt that we will solve this situation.”

There were signs Barcelona fans weren’t too optimistic when they failed to buy all tickets available for Tuesday’s match, something that rarely happened when Messi was still around, especially in a big Champions League match.

Piqué said it was “hurtful” to hear jeers from the Camp Nou crowd for Sergi Roberto, who was singled out for his poor performance while playing improvised on the right flank.

To make things worse, Pedri and Jordi Alba sustained muscle injuries during the match and are expected to be sidelined for a while.

Piqué said the next few weeks will be key for Barcelona, a five-time champion in Europe’s top competition.

Barcelona’s next match in Group E will be at Benfica later this month. Benfica opened with a 1-1 draw at Dynamo Kyiv on Tuesday.

Loading...
Denial of responsibility! TechiLive.in is an automatic aggregator around the global media. All the content are available free on Internet. We have just arranged it in one platform for educational purpose only. In each content, the hyperlink to the primary source is specified. All trademarks belong to their rightful owners, all materials to their authors. If you are the owner of the content and do not want us to publish your materials on our website, please contact us by email – [email protected]. The content will be deleted within 24 hours.
BarcelonaBarcelonasBayernbayern munichExposesFuturegrimLionel Messi
Share

You now only have to sell one kidney to buy the iPhone 12, iPhone 12 mini or iPhone 11 | Digit