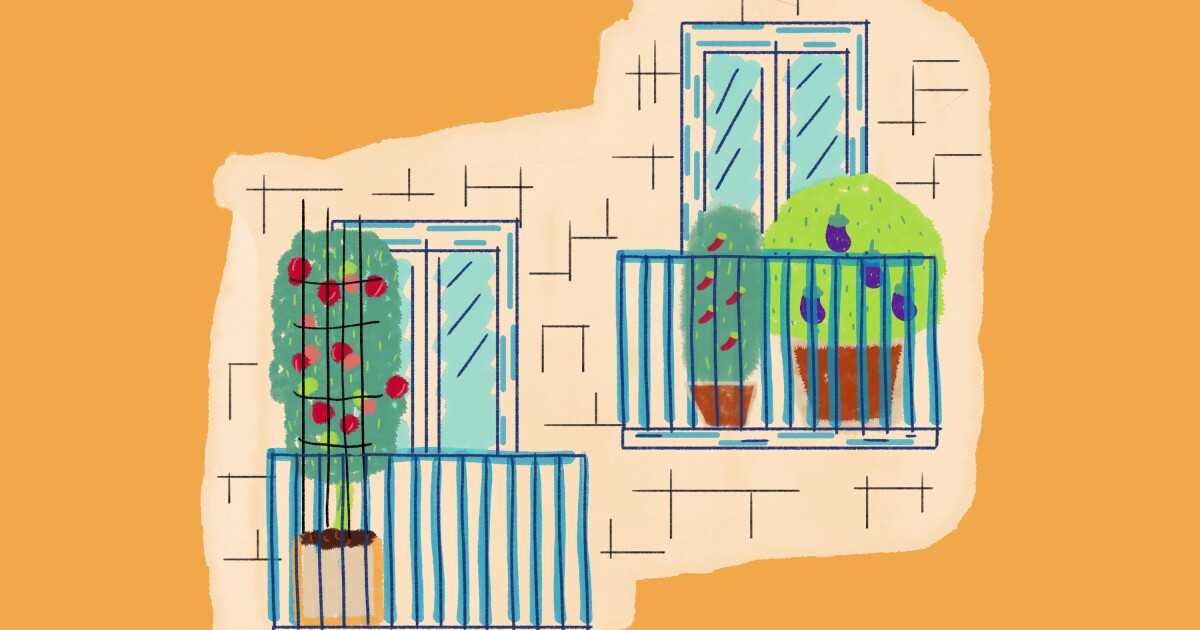 Growing veggies in pots is easy, once you know these 6 secrets

This story is part of a package about growing food in containers. Here’s all you need to know, plus learn how to successfully grow fruits and herbs in a contained space.

If growing vegetables were like growing California native plants, we would all be farmers, rejoicing in our plenty. But here is the bald truth about growing food: You can’t just put it in a pretty pot and walk away.

“It’s like having a pet, which needs to be fed every day and needs attention,” says urban farmer Lauri Kranz, co-owner of Edible Gardens LA and co-author of “A Garden Can Be Anywhere” with her husband and partner, Dean Kuipers.

“Native plants can be so forgiving we forget about them, then turn around and they’re twice as big as they were before and doing fine. But it’s not like that with vegetables and herbs. They need love, a consistent love, and they’ll perform as long as you water them well, give them a little food here and there, and harvest when they’re ready.”

In other words, don’t spend a lot of time and money on soils, pots and plants if you aren’t willing to put in the time to see how your vegetables are faring every day. This is especially important when you’re growing vegetables in pots, because container crops require more watering and feeding than the in-ground variety — pots dry out and nutrients are diluted and washed away with each soak.

For Kranz, tending her plants is a morning ritual. Watering in the early morning is best because it reduces the risk of mildew from water sitting on leaves when it’s cool at night and gives your potted plants the moisture they need to withstand the heat of the day.

She uses a Behrens 2-gallon galvanized steel watering can (about $32 at L.A.-area Ace Hardware stores) because it slowly drenches the soil, not just sending water down the sides of the pot out the bottom as a fast hose will do. And with a watering can, she can add some seaweed extract every couple of weeks — her favorite fertilizer — “just to give some extra nutrients. My plants respond beautifully to that.”

Kranz strongly recommends using an organic, biodynamic soil to start — one that has plenty of beneficial microbes — and then adding a handful of compost to the pots every month or so to give them an additional nutrient boost. “Plus, if you add compost, you’ll see your soil come alive. Nine times out of 10, I see earthworms coming out of the bottom of my pots, and that’s good, because the richer the soil, the more worms you tend to find in it.”

Here are six more tips for growing vegetables in containers in L.A.

1. Bigger pots may be better

Select size based on what you’re growing. Sometimes you can add several plants to one large pot, but tomatoes need a deep pot — at least knee-high and about as wide — all on their own, Kranz said, because they tend to take over. So they aren’t good for companion planting unless you are able to find some of the new dwarf varieties, such as those produced by the Dwarf Tomato Project.

Tomatomania owner Scott Daigre says one of his favorites is Saucy Mary, a tiny “micro dwarf” plant he says can be tucked into a pot with several other plants and still provide dozens of delicious green-and-orange-striped fruit shaped like Roma tomatoes. Urban farmer Ken Sparks — Farmer Ken Official on Instagram — likes the Husky tomato variety for pots because of its compact size and flavor.

Many veggies are sociable. In the summer, Kranz likes to plant two or three mild shishito pepper plants or Japanese eggplants — two of her favorites — in a single large pot to increase her yields. You can grow a couple cucumber or bean plants in a single pot too; just remember these are plants that need a simple trellis to do well (unless you choose a bush bean variety that does not require staking). Kranz said she uses bamboo stakes to build a simple teepee over the plant so it can climb as it grows.

In winter in Southern California, lettuce, kale and other greens grow together easily in containers, she said. “All leafy greens grow great in pots, but I wouldn’t try them in the summer because it’s too hot. You might be able to grow kale, for instance, but it usually ends up tasting pretty bitter (from the heat).

Most vegetables can be grown in containers, Kranz said, except for really large, sprawling varieties such as pumpkins and melons. “When I think of the most successful plants in pots, I think of eggplants, tomatoes, green beans, okra, cucumbers, potatoes and peppers — except bell peppers. They’re not easy, especially in Southern California, where a lot of times they get sun damaged before they get a chance to ripen.”

However, self-proclaimed Gangsta Gardener Ron Finley, creator of the Ron Finley Project and a Master Class garden instructor, says he loves pumpkins and thinks you can grow them in containers with a little work. “You’ll have to grow it up a trellis that goes straight up instead of growing on the ground, or make an arbor over the pot. … There’s always a way if people are willing to be creative.”

Add flowers and flowering herbs to draw pollinators. Kranz is a particular fan of African blue basil, a perennial with fragrant wands of purple and cream flowers that attract bees from everywhere — even if your balcony is seven floors up. Adding flowers like marigolds, nasturtiums, zinnias and poppies help beautify your balcony garden while attracting beneficial insects.

Make sure you plant for the season, says Sparks. “Here in Los Angeles, you grow your cool-season crops — such as lettuce, kale, spinach, broccoli and peas — in the fall, winter and spring, and hot-season crops — like tomatoes, eggplant, peppers, cucumbers and squash — in the summer. Lettuce does great in the fall but it hates the heat of summer.”

Warm-season plants will just pout if temperatures stay below 70 degrees. It is possible to cheat a little, Sparks said — he once kept a kale plant going for three years by trimming only the outer leaves and keeping it protected from intense sun — but generally you’ll have less heartbreak if you grow plants within their season.

6. Harvest when the crop is ready

This may sound obvious, but sometimes people try to harvest based on their schedule, not the plant’s. “The green bean that is ready today will be tough and not enjoyable in a day or two,” Kranz said. “You want to harvest food at the peak of its health; that’s part of the reason we grow our own food — because it’s healthier, tastes better and it’s available at our fingertips.”

Denial of responsibility! TechiLive.in is an automatic aggregator around the global media. All the content are available free on Internet. We have just arranged it in one platform for educational purpose only. In each content, the hyperlink to the primary source is specified. All trademarks belong to their rightful owners, all materials to their authors. If you are the owner of the content and do not want us to publish your materials on our website, please contact us by email – admin@techilive.in. The content will be deleted within 24 hours.
Loading...
easyGrowinglifestyle newslifestyle updatenews updatepotsSecretstechi live
0
Share

Reassess Your Spending and Saving

Ready to Recruit in Person, College Coaches Move Toward Normal