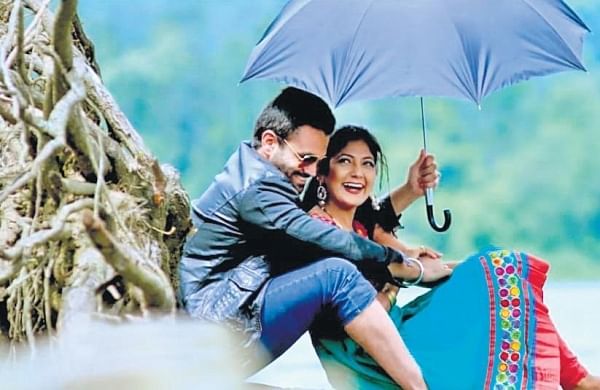 H/34 Pallavi Talkies has been in the making for a long time now. And once again they are back in the news.

The film, starring Tilak Shekar in the lead, had debutant director Srinivas Chikkanna popularly known as Seeni releasing the first song from the film on May 27.

The director tells us that the film is all set to go in for an OTT release, and the song release was the first step to reach out to the audience.

“It is like reintroducing our film to viewers. The official trailer will be launched in the next 10 days,” says the director. The film’s plot is based on a true incident. The storyline was triggered when the director went to watch The Conjuring at Urvashi Theatre in 2013. “We have worked out the screenplay, which has a horror element. It’s more of a psycho-thriller, for which we have taken influences of some scary incidents taking place around the world,” he says. Ask the director about the comparisons made between his film and Krishna Talkies.

Does the latter hold the same plot? “The matter came to my notice when the makers of Krishna Talkies took forward the project. I don’t want to debate about it now. I consider this bad luck, because I began work on the film seven years ago and they started the project much later. Someone leaked my plot and my one-liner. The makers of Krishna Talkies were fortunate to release it before me.

Though the storyline seems similar, the screenplay of H/34 Pallavi Talkies is different,” explains Srinivas Chikkanna, who is happy that his film is finally seeing the light of day. He is gearing up to release it on a popular streaming channel. “I will cater to viewers who enjoy watching the horror genre, “ he adds. The film, produced by Manjunath K and Ravikiran M Gowda under the banner Kalabhairava Arts, has music scored by Ajaneesh B Lokanath, and cinematography handled by Manohar Joshi. The star cast also comprises Yagna Shetty, Achyuth Kumar, Avinash, Sudha Belawadi, Padmaja Rao, and Amrutha.

Denial of responsibility! TechiLive.in is an automatic aggregator around the global media. All the content are available free on Internet. We have just arranged it in one platform for educational purpose only. In each content, the hyperlink to the primary source is specified. All trademarks belong to their rightful owners, all materials to their authors. If you are the owner of the content and do not want us to publish your materials on our website, please contact us by email – [email protected]. The content will be deleted within 24 hours.
Loading...
entertainment newsEntertainment updateH/34 Pallavi TalkiesH34news updateottPallaviroute
0
Share

Stem cell drugs surprise researchers: Could lead to better drugs in the future