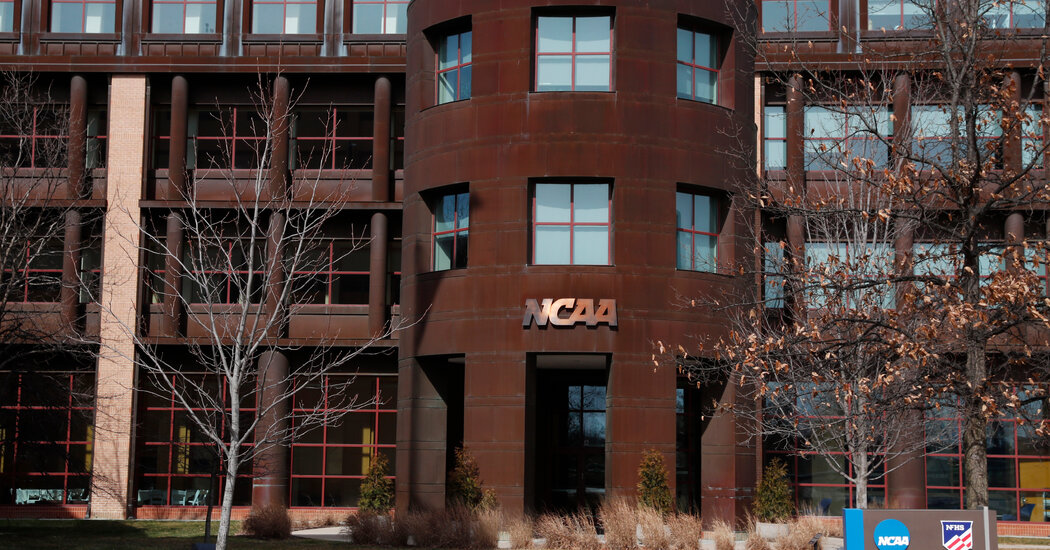 The coronavirus pandemic fueled a $600 million plunge in the N.C.A.A.’s revenues during its most recent fiscal year, a staggering indication of how the pathogen forced a financial reckoning throughout a college sports industry that was already under scrutiny from lawmakers and regulators across the country.

The decision in March to cancel the men’s national basketball tournament cost the association $702 million in television and marketing rights, N.C.A.A. board members were told during a video call this month. And although the N.C.A.A. recouped some $270 million through insurance and spent about $473 million less, the association still posted a loss of nearly $56 million during the fiscal year that ended in August, meeting minutes show.

The N.C.A.A. had planned to distribute $600 million to its Division I leagues last year, but ultimately paid out less than half of that.

In an interview this month with The New York Times, Mark Emmert, the association’s president, referred to a range of financial backstops, including reserves and lines of credit, and budget cuts that had the N.C.A.A. operating with a staff roughly one-quarter smaller than it did a year ago.

“And so we’re fine,” said Emmert, who paused for a moment before he completed the sentence. “We’re delivering all of the services that we need to — not always as fast as we’d like to, but we’re sure getting it done.”

Emmert, who in recent months has overseen buyouts, early retirements, furloughs, budget cuts and salary and hiring freezes, said association leaders were not currently “contemplating” another reduction to the distribution to the N.C.A.A.’s leagues, which in turn share money with member schools.

“We’re alive and well,” Emmert said. “We’ve got to get back to being able to support the schools, first and foremost, in the way that they all are accustomed to and require.”

The pandemic came at a time when the N.C.A.A. was facing pressure in the courts and, perhaps most prominently, in Congress and the nation’s statehouses, where lawmakers were increasingly hostile to limits on how student-athletes could profit off their fame.

The N.C.A.A. had been expected to approve new rules this month, but it delayed its plans after the Justice Department expressed misgivings in the waning days of the Trump administration. The delay angered lawmakers — and very well might have flared some interest in federal legislation on the issue of name, image and likeness — though N.C.A.A. officials insist that the association will ultimately act.

Amid long political battles and their potentially seismic implications for the collegiate sports business model of students as amateur athletes, the N.C.A.A.’s abruptly troubled finances have become an urgent matter for the industry since March.

In its fiscal year before the pandemic, the N.C.A.A. logged more than $1.1 billion in revenue, most of it related to broadcast and marketing rights of the 2019 N.C.A.A. men’s basketball tournament. It recorded a profit of nearly $71 million and ended the year with net assets of $450 million.

By the end of the fiscal year that ended in August 2020, according to a financial statement obtained by The Times, the N.C.A.A. was down to about $394 million in net assets. Insurance proceeds accounted for more than half of its $519 million in revenue.

And although the association’s liabilities ballooned from about $161 million to $307 million, auditors said the N.C.A.A. could quickly have about $641 million available to it, mostly through its vast portfolio of investments.

In the first quarter of the current fiscal year, board members were told this month, revenues were down about 4 percent from the same period a year earlier, but that expenses had been cut by 15 percent.

Although N.C.A.A. officials are bracing for a continuing decrease in championship revenues, they are moving ahead with plans for the men’s basketball tournament, the group’s financial lifeblood.

Organizers have repeatedly and forcefully defended last year’s cancellation, which auditors said had cost the N.C.A.A. more than $800 million when ticket sales are included. There is also insurance in place for the 2021 tournament. But executives are well aware that missing another year of tournament revenues would substantially add to the association’s problems.

In a bid to make the tournament happen in some form, officials have scrapped the coast-to-coast games that spread the tournament across the country each March and announced that the entire competition would be held in Indiana in March and April. Players, coaches, officials and others crucial to the tournament will be required to test negative for the virus on seven consecutive days before arriving in Indianapolis, and masks will be mandatory for people unless they are eating, practicing or playing, or are alone in their hotel rooms.

The N.C.A.A. said last week that the tournament’s start would be delayed until March 18, two days later than initially planned.

Denial of responsibility! TechiLive.in is an automatic aggregator around the global media. All the content are available free on Internet. We have just arranged it in one platform for educational purpose only. In each content, the hyperlink to the primary source is specified. All trademarks belong to their rightful owners, all materials to their authors. If you are the owner of the content and do not want us to publish your materials on our website, please contact us by email – [email protected]. The content will be deleted within 24 hours.
Loading...
FallsHammeredMillionNCAAnews updatepandemicrevenuesports news
0
Share

The Health Benefits of Iron and Ferritin+ | Better Living

Formula One: Vettel to begin a new innings with Aston Martin