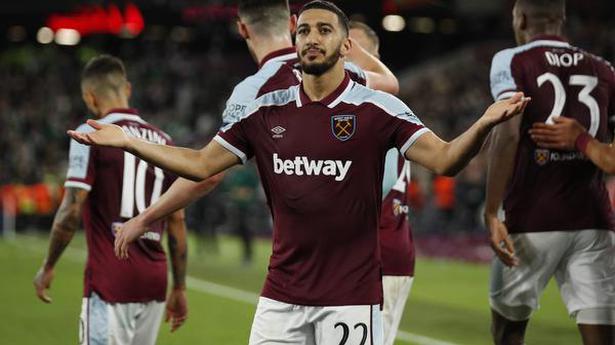 West Ham United made it two wins out of two in the Europa League after goals by Declan Rice and Said Benrahma secured a 2-0 home victory over Rapid Vienna while Leicester City suffered a 1-0 defeat at Legia Warsaw on Thursday.

Olympique Marseille’s home game with Galatasaray, which ended in a 0-0 draw, was marred by crowd trouble with play held up for eight minutes in the first half after rival fans hurled fireworks at each other.

West Ham twice hit the woodwork before England midfielder Rice turned in Michail Antonio’s cross in the 29th minute and Benrahma sealed the win in stoppage time with a crisp low shot.

The result put the Hammers top of Group H on six points, three ahead of Dinamo Zagreb.

Spartak, second on three points, fought back having fallen behind after 11 seconds to beat Napoli.

The home side had defender Mario Rui sent off in the 30th minute for a rash tackle and Spartak turned the match round thanks to two goals from Quincy Promes and another by Mikhail Ignatov.

Victor Osimhen pulled one back for Napoli in stoppage time, too late to spare Napoli coach Luciano Spalletti his first defeat in all competitions after taking over in May.

Leicester and Napoli have one point each from their opening two games.

Leverkusen goalkeeper Lukas Hradecky produced a string of superb saves against Celtic in Group G and the host was punished by clinical finishing at the other end.

Piero Hincapie fired the visitors ahead in the 25th minute and Florian Wirtz doubled the lead with a neat finish before Lucas Alario’s penalty and Amine Adli completed the rout.

Real Betis also celebrated its second successive win as it beat Ferencvaros 3-1 in Budapest to stay level with Leverkusen on six points.

Denial of responsibility! TechiLive.in is an automatic aggregator around the global media. All the content are available free on Internet. We have just arranged it in one platform for educational purpose only. In each content, the hyperlink to the primary source is specified. All trademarks belong to their rightful owners, all materials to their authors. If you are the owner of the content and do not want us to publish your materials on our website, please contact us by email – [email protected]. The content will be deleted within 24 hours.
Declan RiceEuropaEurope leaguehammersLeagueLegia Warsawleicester cityNapoli
Share

iPhone 13 and iPhone 13 Pro: Where to get the best deals