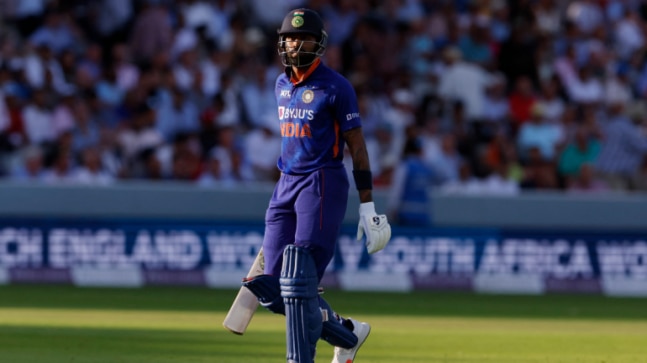 Former Pakistan pacer Shoaib Akhtar advised Hardik Pandya to remain focused on his game as he feels he has all the ability to become one of the best all-rounders in the world.

Hardik Pandya will become one of the best all-rounders: Shoaib Akhtar (Reuters)

Former Pakistan pacer Shoaib Akhtar welcomed the return of Hardik Pandya as an all-rounder in the international arena while urging the India star to remain focused on his game. Shoaib reckons that Hardik has the ability to become one of the best all-rounders in the world.

Hardik Pandya was awarded the player of the series after his tremendous contributions with both bat and ball in India’s win over England. Pandya rose to the occasion in the third ODI game, the decider in Manchester, when India were put under the pump in the absence of Jasprit Bumrah.\

“He completes the team’s balance. He got a good jolt, staying out of the team for about two years because of his fitness. He was casual about his life and is now better. He looks more focused and seems to be enjoying his life on the field. Don’t enjoy too much off the field because he is a very rare talent,” Akhtar said on his YouTube channel.

Akhtar feels Hardik has reinvented himself after being dropped from the team due to his fitness, adding that the player adds more balance to the Indian team. Since April, Pandya has won the Indian Premier League as a captain, has performed well against South Africa and England and has even captained the Indian team in Ireland.

“He is a great fielder and a great fast bowler, a great addition to the pace battery. In the latter overs where a lot of bowlers struggle, he performs and he managed to outshine the rest of the bowlers.

“India is huge and becoming a star of such a big country is a great responsibility. I am sure he will understand his responsibility and will focus on his game. He will get all kinds of fame, money and respect so just stay focused Hardik Pandya,” Akhtar added.

“He is obviously a great batter. He has got so many compact shots and he plays deliveries late. So I am sure that he will become one of the best all-rounders in the world. Just stay focussed,” Akhtar further said.

Denial of responsibility! TechiLive.in is an automatic aggregator around the global media. All the content are available free on Internet. We have just arranged it in one platform for educational purpose only. In each content, the hyperlink to the primary source is specified. All trademarks belong to their rightful owners, all materials to their authors. If you are the owner of the content and do not want us to publish your materials on our website, please contact us by email – [email protected]. The content will be deleted within 24 hours.
AkhtarallroundersfocusedHardikHardik PandyaHardik Pandya bowlingHardik Pandya fitnessHardik Pandya vs England
Share

Sohum Shah on completing a decade in the film industry