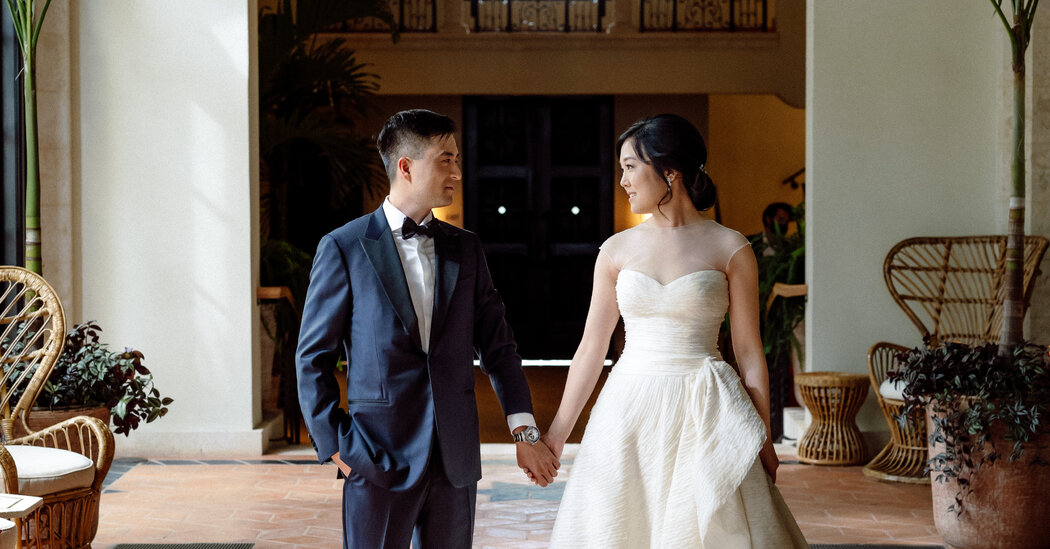 He Had Many Questions Before Popping the Big One

Audrey Han and Dong Frank Han met in the summer of 2012 when they sat next to each other at an investment banking internship run by Morgan Stanley in New York.

But despite sharing a last name, Ms. Han, then a sophomore at Harvard, and Mr. Han, a junior at Yale, did not share a bloodline.

“The whole thing was just a coincidence,” said Ms. Han, 29, now a senior associate at Point Olema Capital Partners, a private equity firm based in San Francisco. “In fact, I’m Korean and he’s Chinese,” she added, laughing. “We were only sitting next to each other because they used alphabetized seating.”

When the internship ended, the two exchanged phone numbers, but neither of them bothered to call the other.

Five years later, in July 2017, they re-entered each other’s orbit, and this time around both had more in common than just their last name.

Each had left New York for San Francisco, and both were single and searching for true love on the dating app Coffee Meets Bagel. Despite not having seen or heard from one another since 2012, they immediately recognized each other.

“Wow, she was gorgeous,” said Mr. Han, 30, now a senior analyst at Tensile Capital, an investment firm based in Larkspur, Calif.

“He was even more handsome than I remembered,” Ms. Han said. But “there was one problem. Early on Frank was asking me very long and sometimes personal questions, which made me a bit uncomfortable.”

His queries did not stop her from continuing to talk to him, though. They began texting each other and, in July, 2017, arranged for a first date, which took place the following month at a bar in San Francisco.

“We were having a great time and then suddenly, Frank started asking me all kinds of questions again, as if he was interviewing me,” Ms. Han said. “He asked me everything from the kind of ice cream I liked to what my favorite animals were to whether or not I wanted to have children.”

Again, his questions did not deter her. Three days later, Mr. Han took Ms. Han to what is known in San Francisco as an ice-cream social, where ice cream lovers can enjoy samples of their favorite ice cream offered by vendors out of their trucks (Ms. Han prefers vanilla).

As they were leaving, Mr. Han asked Ms. Han if she would be able to spend the rest of her afternoon with him, and when she wondered why he was asking, Mr. Han reached into his pocket and pulled out two passes to the San Francisco Zoo.

“So you could enjoy seeing all of your favorite animals,” he said.

Ms. Han was stunned. “It dawned on me as to why he asked me all of those questions,” she said. “He wasn’t interrogating me, all he was doing was asking me about some of the things I liked most in life so that he could get them for me. I was in awe.”

The two were engaged Dec. 12, 2020, on a seaside cliff in Big Sur. He popped the question just after a heavy fog dissipated.

“I proposed and she said yes,” said Mr. Han, “and that became the greatest moment of my life — so far.”

Perhaps an even greater moment came on Oct. 23, when Mr. Han and Ms. Han were married by Carol Ann Ross, a Universal Life minister, at the Four Seasons Hotel at the Surf Club in Surfside, Fla., before 100 vaccinated guests.

“I just enjoy every single day with him,” the bride said of the groom two days after their wedding. “Everyday is a little different from the day before. It never gets old.”

Denial of responsibility! TechiLive.in is an automatic aggregator around the global media. All the content are available free on Internet. We have just arranged it in one platform for educational purpose only. In each content, the hyperlink to the primary source is specified. All trademarks belong to their rightful owners, all materials to their authors. If you are the owner of the content and do not want us to publish your materials on our website, please contact us by email – [email protected]. The content will be deleted within 24 hours.
biglifestyle newslifestyle updatenews updatePoppingquestionstechi live
Share

Viral Video: This Microwave Popcorn Hack Shows You May Be Making Them Wrong