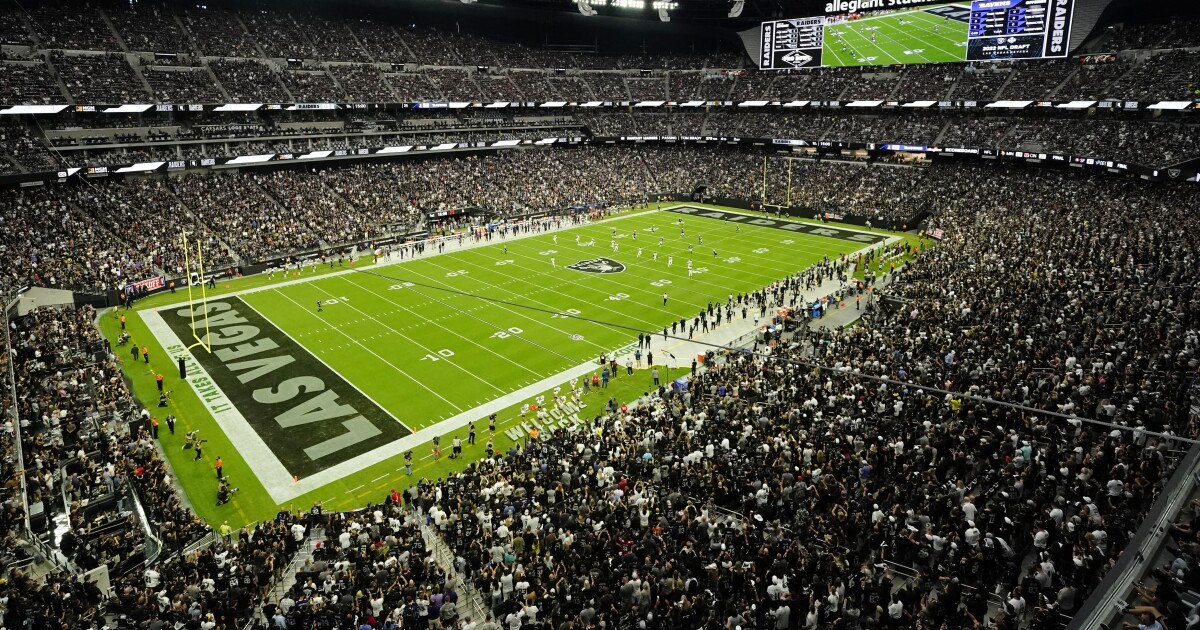 Hernández: Raiders in Las Vegas is pure adult entertainment with an edge to it

This isn’t a place for children. That’s not my verdict. That’s the verdict of the fans who attended the Raiders’ first-ever regular-season game at Allegiant Stadium played in front of a live audience.

They kept their offspring at home.

Walking around the stadium’s main concourse before the Raiders’ 33-27 overtime win over the Baltimore Ravens, the absence of the children was striking. The handful of them who were here looked as out of place as those 7- or 8-year-olds who are dragged by their parents to a supermarket or convenience store at midnight.

Maybe there weren’t any children because it was a school night. I’m guessing that wasn’t the reason.

The Raiders aren’t playing in a dump anymore, but the energy in the stands remains the same. This was a Raiders game, and Raiders games are adult entertainment. This place has an edge to it, which is further accentuated by the stadium’s silver-and-black color scheme.

The hours leading up to the game were a reminder of that.

A ride-sharing service’s algorithm determined the 2.8-mile drive from my hotel to Allegiant Stadium was worth $56, prompting me to participate in what promises to become one of the most painful pregame traditions in American sports.

I crossed the Hacienda Avenue bridge on foot.

I wasn’t alone, with hundreds, if not thousands, of others also walking down the eastbound lanes of the blocked street.

Most of the marchers wore Raiders colors. Even more were holding beers.

Occasionally, someone screamed, “Raaiiiiiders!” The calls elicited hoots and hollers from the intoxicated crowd.

Playful taunts were directed at the surprising number of fans in Ravens gear.

More menacing words were targeted at a man and woman in San Francisco 49ers jerseys.

“Your woman is afraid!” someone in a Raiders shirt screamed at a man in a George Kittle jersey.

I wasn’t sure if he was kidding.

“You’re all up in your feelings,” the fan in the Kittle jersey responded. “You’re one of those fans, huh?”

The man in the Raiders shirt started walking faster and closed the distance between him and his target. If he was joking before, he wasn’t now, screaming how the man in the Kittle jersey supported the “wrong team” and making physically threatening gestures.

The couple in the 49ers jerseys ignored him and walked away, onlookers joking about how brave they were to come to a Raiders game dressed like that.

“You know you’re going to get s—,” someone said chuckling.

The problem wasn’t the distance, the walk starting under the Shoppes at Mandalay Bay and leading pedestrians over Interstate 15. The trouble was the heat, temperatures reaching 105 degrees in the early afternoon.

It was hot. It was fry-an-egg-on-the-sidewalk hot.

“They probably could have planned it a little better,” said Jose Diaz of San Dimas, who traveled to the game with his brother Peter and a couple of friends.

Still, Diaz had no regrets.

The 44-year-old has cheered for the Raiders since he was a child in Echo Park.

“This is a once-in-a-lifetime experience,” Diaz said.

Many fans were in elaborate costumes. A Mad Max-themed float circled the stadium. A scantily clad woman walked in front of a two-story party bus, holding a chain that was attached to its front bumper.

In case you were wondering, there was no SpongeBob vehicle.

A carpenter from Baltimore, Wild had never previously visited Las Vegas. The game offered him an excuse.

“It’s going to be great for tourism in the city,” said Boone, the president of KO Tickets.

Inside Mandalay Bay, there is a route through the casino floor that is designated “Stadium Walk,” which conveniently passed by the sports book before emptying people onto Hacienda Avenue.

To the left was Allegiant Stadium. To the right was a beer garden in front of the Luxor sponsored by a major company.

The Raiders did what they could to showcase the city’s entertainment options. Gladys Knight sang the national anthem. Steve Aoki played music for the crowds.

The halftime show was headlined by Ice Cube, who performed a song in which the chorus included the line, “I can do it, put your ass into it.”

Too Short rapped his trademark single, “Blow the Whistle,” which has lyrics that can’t be printed.

If children were here, their parents could have been forced to talk to them about some adult subjects. But the children weren’t here, and they probably won’t be in the near future.

Loading...
Denial of responsibility! TechiLive.in is an automatic aggregator around the global media. All the content are available free on Internet. We have just arranged it in one platform for educational purpose only. In each content, the hyperlink to the primary source is specified. All trademarks belong to their rightful owners, all materials to their authors. If you are the owner of the content and do not want us to publish your materials on our website, please contact us by email – [email protected]. The content will be deleted within 24 hours.
AdultEdgeEntertainmentHernándezLasnews updatePureRaiders
0
Share

Facebook Shields Certain VIP Users From Some of Its Rules: Report