Notice: amp_is_available was called incorrectly. `amp_is_available()` (or `amp_is_request()`, formerly `is_amp_endpoint()`) was called too early and so it will not work properly. WordPress is currently doing the `pre_get_posts` hook. Calling this function before the `wp` action means it will not have access to `WP_Query` and the queried object to determine if it is an AMP response, thus neither the `amp_skip_post()` filter nor the AMP enabled toggle will be considered. It appears the theme with slug `publisher` is responsible; please contact the author. Please see Debugging in WordPress for more information. (This message was added in version 2.0.0.) in /home/runcloud/webapps/techilive/wp-includes/functions.php on line 5313
 Hernández: Why the Dodgers' oversized bet on Trevor Bauer might spin out of control - TechiLive.in 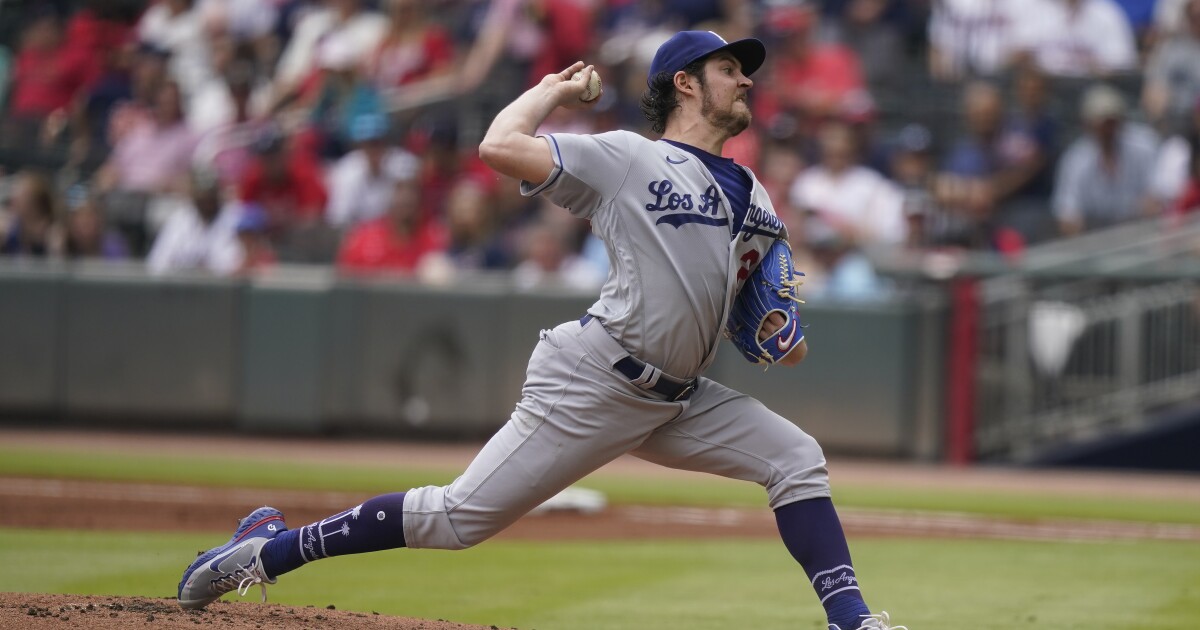 Hernández: Why the Dodgers’ oversized bet on Trevor Bauer might spin out of control

Under their current owners, the Dodgers have taken pride in refusing to adhere to the fundamental spirit of baseball’s compensation system, which is to reward players for what they’ve done in the past and not necessary for what they’ll do in the future.

Ironically, that’s the very position the Dodgers are now in with their high-profile free-agent acquisition from the winter who characterized the organization’s forward-thinking culture.

Just two months into the season, Trevor Bauer isn’t the same pitcher the Dodgers signed in the winter.

The Dodgers invested $102 million in the right-hander believing he was a frontline starter, but who knows what they’re paying for now that the commissioner’s office has informed teams it would start enforcing rules prohibiting the doctoring of baseballs.

The transformation was as instantaneous as it was pronounced.

In a 4-2 loss to the Atlanta Braves on Sunday, the spin rate and usage of Bauer’s four-seam fastball were noticeably down. Bauer held the Braves to three runs in six innings, but he didn’t pitch well. The 10 baserunners he allowed were a season-high.

To his everlasting credit, Bauer didn’t deny having previously used foreign substances to improve his grip on baseballs, coming as close to admitting he did without actually saying it.

“I just want to compete on a fair playing field,” he said.

An aversion to risk has characterized Andrew Friedman’s seven seasons as the team’s president of baseball operations, but the Dodgers made a sizable and potentially costly wager by signing Bauer.

They gambled commissioner Rob Manfred wouldn’t remove his head from the sand.

The Dodgers now have $102 million tied up in a pitcher who went into his Cy Young Award season last year with a career earned-run average of 4.04.

Asked if he could be the caliber of pitcher the Dodgers paid for if the league takes substantive measures to discourage the use of foreign substances, Bauer replied, “Go look at the 2018 numbers and tell me what you think.”

He spent that season with the Cleveland Indians and was 12-6 with a 2.21 earned-run average. He did that with a four-seam fastball that averaged 2,322 revolutions per minute, according to Baseball Savant.

Bauer’s average spin rate for the pitch jumped to 2,779 rpm last year and was at 2,835 through his first 12 starts this year. Against the Braves on Sunday, his Bauer’s first start since the league informed owners of its plans to police the problem, the figure dropped to 2,612 rpm.

The Dodgers have improved their spin rates from last year by 7.04%, more than any other team, according to a report by Sports Illustrated, which called them “Spin City.” A crackdown on foreign substances could severely affect their chances of repeating as World Series champions, especially considering how reliant they are on pitching.

Manager Dave Roberts said he hasn’t held any clubhouse meetings on the subject, even though a suspension to an offending pitcher could affect the entire team. Nor is Roberts interesting in finding out which pitchers were using what substances.

“I’m not as curious as you are,” Roberts said.

But in the eighth inning of a close game, wouldn’t he want to know if a certain reliever might have, say, a 300-rpm drop?

“I still think that he’s going to get guys out and execute pitches,” Roberts said.

Roberts shared a concern about the midseason shift in MLB policy, making the case a pitcher who pitched under one set of conditions might be more susceptible to injury pitching under another. While he approved of Major League Baseball’s efforts to clean up the game, he also said he didn’t view the use of sticky materials as cheating.

“I think that cheating is more when rules are imposed, are in place, and you break them,” he said. “But I think we’re getting to that point.”

Is it too much to ask of players to follow rules for which there are no penalties?

Bauer, who was once a loud critic of the use of foreign substances, made a similar point. He said of the commissioner’s office, “If they’re serious about actually doing something, about the rule that’s on the books, then that’s all I’ve wanted for four years.

“So, we’ll see what they do. Unfortunately, in MLB, a lot of times, nothing gets done until their hands gets forced and it becomes a public issue.”

Highlights from the Dodgers’ 4-2 loss to the Atlanta Braves on Sunday.

Tuesday will mark the release of “Cheated,” a book by longtime New York-based baseball reporter Andy Martino that chronicles the Houston Astros’ sign-stealing scandal. The similarities between that controversy and this one are striking, Martino describing how Manfred’s efforts to incrementally legislate the issue allowed the practice of the game’s darks arts to escalate into a technologically enhanced arms race. (Full disclosure: Martino is a friend and I wrote a blurb for the book jacket.)

The commissioner only seems interested in the integrity of the game as it relates to revenues. Until the bottom line is affected and he takes decisive action, however, players are in a no-man’s land of sorts. If they don’t cheat, they risk losing their jobs. If they cheat, they are in danger of being punished when the rules are enforced.

Manfred’s missteps don’t excuse the Dodgers for the oversized bet they placed on Bauer. As Bauer implied in the wake of his loss to the Braves, his previous statements and pitch-tracking data made it clear what he was doing.

“If you want to do research and make your own decision, go for it,” he said.

Somehow, the suspected cheater is the only person here who doesn’t come across as negligent or devoid of character. This points to a greater problem, about the people who run the game, the culture they are creating and how the sport’s next scandal could be around the corner.

Denial of responsibility! TechiLive.in is an automatic aggregator around the global media. All the content are available free on Internet. We have just arranged it in one platform for educational purpose only. In each content, the hyperlink to the primary source is specified. All trademarks belong to their rightful owners, all materials to their authors. If you are the owner of the content and do not want us to publish your materials on our website, please contact us by email – admin@techilive.in. The content will be deleted within 24 hours.
Loading...
BauerBetControlDodgersHernándeznews updateoversizedSpin
0
Share