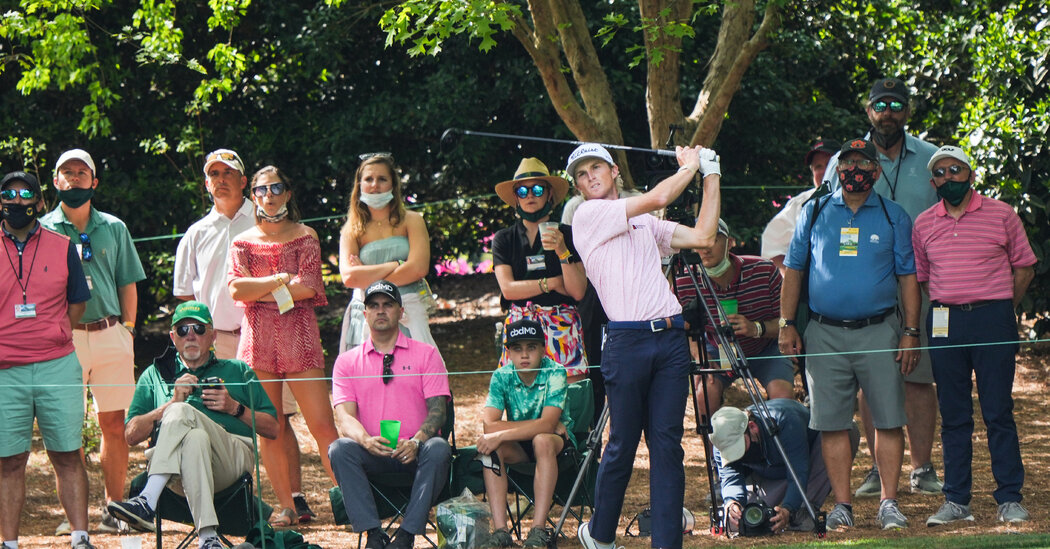 AUGUSTA, Ga. — As an undergraduate at Wake Forest, Will Zalatoris received an invitation familiar to members of the golf team: Come play at Augusta National Golf Club. When he did in 2017, he recalled recently, he stood on the bridge straddling Rae’s Creek and gazed around Amen Corner.

He has now crossed the bridge at No. 12 again and again, and at his father’s urging, he has looked back each time. But on Sunday, in the final round of his inaugural appearance at the Masters, the walk was as a 24-year-old contender for the winner’s green jacket — and as the latest embodiment of how one of golf’s grandest spectacles has become more favorable to its first-time entrants.

Zalatoris faltered by the narrowest of margins on Sunday as Hideki Matsuyama putted into history for a one-stroke victory to become the first Asian-born player to win the Masters. But Zalatoris became the first Masters rookie since 1982 to stand alone in second place, a slot most frequently filled across the generations by more experienced players, including those bearing surnames like Nicklaus and Mickelson and Woods.

What was once a rarity at a tournament that began in 1934 is often feeling like the norm. Until 2011, a player in his Masters debut had placed second in the tournament, alone or in a tie, just five times. Since then, it has happened five more times, including in the 2020 and 2021 tournaments.

The 42-year legend of Fuzzy Zoeller, the last player to win the tournament on his first attempt, will linger among Augusta National’s hills and pines for at least another year. But a wrinkle for the sport and its future is that golf’s newest names are consistently proving hugely formidable at the most venerated of American tournaments, one where experience is deeply prized and jitters can attack even those players with plenty of it.

“He’s our trendsetter for the game,” Zalatoris said. “I think that’s part of the reason why so many kids come out early, is we saw him be fearless at a young age and we come out and play fearless. And then on top of that, we were interested in watching the tournament year in, year out.”

There could be other reasons, too, for the surge in fortunes among players in their debut. In 2017, Phil Mickelson proffered that Augusta National’s greens, which were particularly vicious this tournament, had become more amenable for first-time players, perhaps easing their path toward the top of the leaderboard.

“The course has been lengthened, and the greens aren’t the only defense,” Mickelson, who first won a Masters title on his 12th try, said then. “What that allows you to do is miss it in a spot that normally would be bad but get away with it because the greens are more receptive. I think that that allows players who have not played here many times, who maybe put it in the wrong spots, but are able to recover because the greens will receive shots that they didn’t use to receive.”

Still, an admirable finish in a player’s first year does not promise imminent success at Augusta.

Sungjae Im, for instance, missed the cut this year after being one of the runners-up in 2020. Jason Day, the second-place finisher in 2011, still has not won the tournament, just like most of the first-timers who finished second at the Masters. Adam Scott, who earned a ninth-place tie in his first outing in 2002, did not crack the top 10 again until 2011.

“The first year I played here I knew nothing really, and I finished ninth,” Scott, who won the Masters in 2013, said last week. “And then I just started finding out where all the trouble was the years after that. It took me a while, and I really didn’t play good tee to green until about 2010, which was nine years in, and kind of got my confidence back over the next couple years.”

Then again, Jordan Spieth, who finished three strokes behind Matsuyama for a tie for third in this year’s tournament, won on his second try. He marveled over Zalatoris.

“Having seen him progress and his confidence level just continue to progress over the last year and a half, I’m not surprised,” Spieth said Sunday. “It is very difficult this weekend to come out in the position he was in in the final group on Saturday and to — it’s just a different feeling. Then in this wind, to control his high ball flight and to make putts on these greens when you don’t see other greens like this, especially in windy conditions, I thought it’s extremely impressive.”

At sunset on Sunday, Zalatoris was mulling his 279 shots over the tournament, contemplating which ones he could have done better — “that’s just golf every single week” — but was nonetheless relishing a small spot in history. He earned a standing ovation as he approached the green at No. 18 after a day of glancing at every leaderboard he could.

There is, after all, next year.

“I know if I keep doing what I’m doing,” he said, “I’m going to have a really good chance in the future.”

By then, though, there could be another first-year player climbing the leaderboard.

Loading...
Denial of responsibility! TechiLive.in is an automatic aggregator around the global media. All the content are available free on Internet. We have just arranged it in one platform for educational purpose only. In each content, the hyperlink to the primary source is specified. All trademarks belong to their rightful owners, all materials to their authors. If you are the owner of the content and do not want us to publish your materials on our website, please contact us by email – [email protected]. The content will be deleted within 24 hours.
familiarFinishesFirstYearHighMastersnews updatePlayerssports news
0
Share