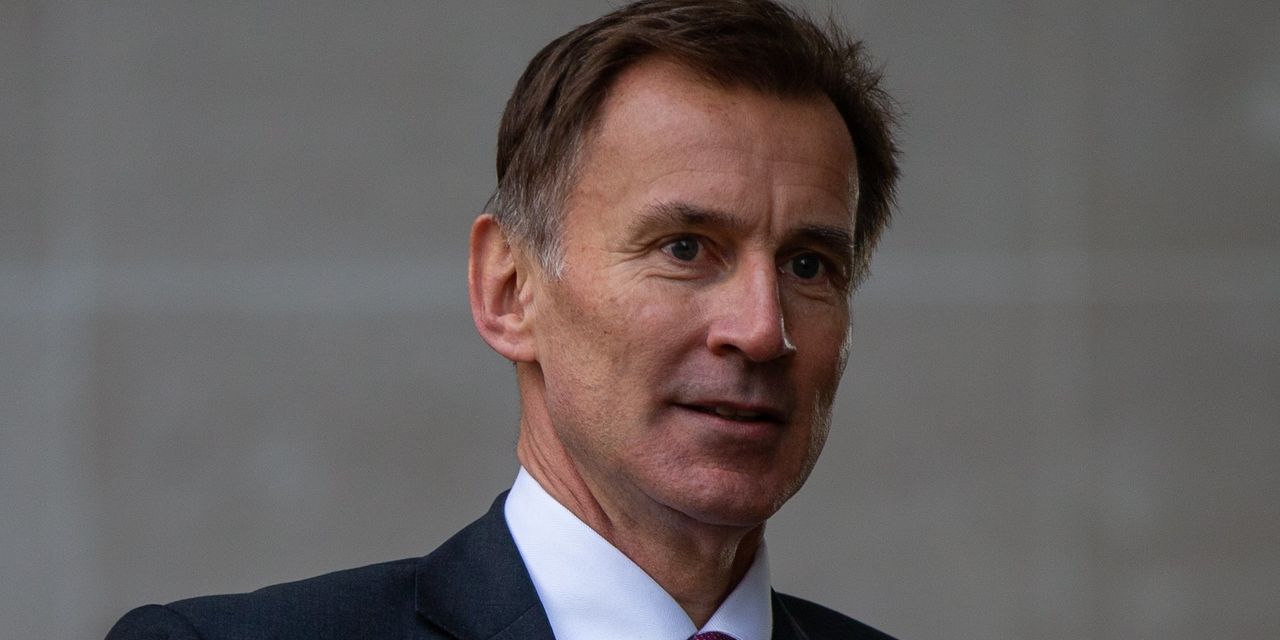 LONDON—U.K. Chancellor of the Exchequer

defended his decision to implement steep tax increases and public spending cuts, saying that many other governments are going to have to follow suit after years of ramped-up spending from the pandemic and new energy subsidies.

The U.K. on Thursday became the first Western economy to say it would sharply curtail its spending growth, even as a recession begins to take hold. Mr. Hunt announced £55 billion of budget cuts and tax increases aimed at convincing investors that the U.K. government is serious about tackling its rising debt load and combating inflation running at 11.1%.

The U.S. and most European governments have piled on debt in past years, particularly during the pandemic as they sought to shield their economies from lockdowns and other restrictions. Now European countries are loosening purse strings again to help protect economies from high energy prices following the Russian invasion of Ukraine. While most governments have outlined costly energy subsidies for the next year or so, European energy prices could remain high for years to come, forcing governments to figure out how to pay for it in the longer run, economists say.

Other governments will have to begin tightening their spending or raising taxes or both, said Mr. Hunt. “Everyone is going to be broadly doing the same things because we’re all facing the same energy crisis, the same economic pressures,” he said, citing the Inflation Reduction Act in the U.S., which imposes new taxes on large corporations, as an example.

So far, the U.K. is the only country that has had its financial markets tested by investors over worries about debt, despite having a relatively light debt load as a percentage of its economy compared with the U.S. and some European peers. In late September, investors began selling off U.K. assets after the previous government of Prime Minister

unveiled a large energy subsidy as well as the biggest tax cuts in a generation, funded by debt.

After growing chaos that threatened a full-blown financial crisis, Ms. Truss fired her finance minister and replaced him with Mr. Hunt, a quietly spoken former health secretary, who quickly reversed the tax cuts. He has now taken economic policy in the other direction by squeezing taxpayers even as the economy slows. Ms. Truss has since resigned.

“This is a path through to the other side and there’s clarity in the U.K. that we are gripping those issues,” he said. “Everyone’s facing higher inflation, higher energy bills, the backlog following the pandemic, issues to supply chains and we’re dealing with these clearly in the U.K.,” he added.

the yield on U.K. government debt climbed slightly, with the 10-year yield sitting at 3.265%, well below a peak of around 4.5% in late September. The pound was flat against the dollar on Friday at $1.19. “The markets seem to feel that the U.K. is heading to a period of stability and that’s what we want,” he said.

The outlook for the U.K. economy is somber. The tax burden will hit its highest level since World War II, according to the Office for Budget Responsibility, a government finances watchdog. The Resolution Foundation, a research group, estimates that U.K. household disposable incomes will be lower at the start of 2028 than they were in 2019. Critics say that Mr. Hunt risks unnecessarily hobbling the economy as it enters a recession that official forecasts say will shrink the U.K. economy by 1.4% next year, the biggest fall of any Group of Seven nation.

“If the U.K. was a business, I would say we’ve made the right decisions for the long term even though it’s very uncomfortable in the short term,” Mr. Hunt said. He added that tax rates would come down in the longer term, with the OBR predicting growth after next year’s recession.

He added that the months of chaos that had engulfed the Conservative Party were largely behind it. Not a single Conservative lawmaker posed a hostile question in the House of Commons after Mr. Hunt presented the plan yesterday, which “demonstrates that the Conservatives are rallying around this approach,” he says.

Mr. Hunt also addressed ongoing trade friction with the European Union following Brexit. Since leaving the EU’s single market for goods and services, export volumes to the nation’s biggest trading partner have dropped. Now that the heat of the Brexit issue has cooled, Mr. Hunt is confident trading access to the EU will improve over time.

“I think [trade barriers] are going to come down over time. I don’t think this is an immediate thing…This is because it’s in the economic interests of both sides to minimize the friction to trade.”

Falling household incomes contributed to a contraction in the U.K. economy during the three months through September. The OBR expects a recession that will last for a little more than a year.

Mr. Hunt’s economic plan will reduce the size of the decline in the U.K.’s gross domestic product during the recession to 2% rather than 3%, according to the OBR. Analysts said there was little the government could do to prevent a recession given the scale of the rise in prices of imported energy.

“This is a cost of living shock for the whole country,” said

chair of the OBR.

“The decisions I took yesterday not only balanced the books but they protect the things that most matter for growth,” Mr. Hunt said. “They protect, you know, our education provision, the money going into schools. They also protect the capital budgets, which largely come out unscathed.” He cited continued investment in nuclear energy and broadband rollout as examples of measures that will bolster longer term growth.

Analysts also said that Mr. Hunt’s measures were much less severe than the austerity measures implemented by the Conservative Party in the aftermath of the 2008 global financial crisis. Most of the cuts to spending and tax increases he announced won’t kick in until 2025, while debt levels are set to remain high. The public spending cuts are largely timed for after the next election, which is expected to be in 2024.

“I would be most surprised if the tax burden gets back down to its long term pre-Covid average at any time in the coming decades,” said

director of the Institute for Fiscal Studies, a think tank. “Higher taxes look to be here to stay.”

—Paul Hannon contributed to this article.

Denial of responsibility! TechiLive.in is an automatic aggregator around the global media. All the content are available free on Internet. We have just arranged it in one platform for educational purpose only. In each content, the hyperlink to the primary source is specified. All trademarks belong to their rightful owners, all materials to their authors. If you are the owner of the content and do not want us to publish your materials on our website, please contact us by email – [email protected]. The content will be deleted within 24 hours.
Budget Figuresbusiness newsBusiness updateChancellorcountriesCutsDomestic PoliticsEconomic News
Share