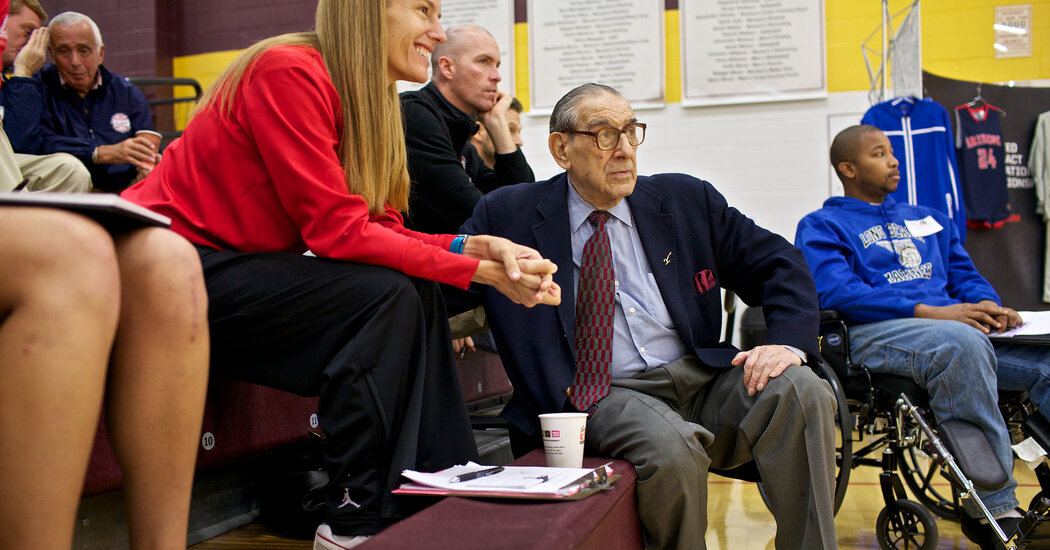 His Basketball Camp Made Hall of Famers. Now He’s One, Too.

Grant Hill was introduced to the Five Star Basketball Camp in the form of a Sports Illustrated article that was published in 1984, when he was 11 years old. As Hill flipped through the pages of the magazine, he found himself transfixed. To him, Five Star sounded like basketball nirvana, an exclusive destination where promising players could consume the game.

“It was like this mythical place where you could go — if you were fortunate enough to go — and then maybe have a chance to play in college,” Hill said. “I remember being blown away by the idea of it.”

Long before the advent of the internet and the proliferation of online scouting services, and long before the emergence of high-profile summer circuits for elite prospects, there was one man, Howard Garfinkel, and one pre-eminent camp, Five Star, which he co-founded in 1966. For several decades, it was the place to be for young players: the place to learn, the place to compare yourself with your peers, the place to draw the attention of college coaches who worked as instructors.

“Garf affected more coaches and more players — from Michael Jordan on down — than anyone in the history of our game,” said John Calipari, the men’s basketball coach at Kentucky and a former Five Star camper and instructor. “It’s just a shame he’s not here.”

Garfinkel is part of a 16-member Hall of Fame class that includes, among others, Paul Pierce, Chris Bosh and Chris Webber; the perennial W.N.B.A. All-Stars Lauren Jackson and Yolanda Griffith; and Bill Russell, who had already been enshrined as a player in 1975 but will be honored this time for coaching the Boston Celtics to a pair of N.B.A. championships.

In a telephone interview, Calipari described Garfinkel as a Runyonesque figure, a throwback from central casting. He ate onion sandwiches covered in salt. He chain-smoked cigarettes. He did not drive. He greeted campers each morning by blasting Frank Sinatra from loudspeakers. He wore orange pants that were adorned with stains from lunch, and he would deign to wear only T-shirts and polos with chest pockets. In fact, he would thank the coaches who gave him pocket-less T-shirts, then toss the shirts in the trash.

“He knew what he wanted to wear,” Calipari said.

It was no surprise, then, that Garfinkel, the son of a garment worker, built Five Star in his blue-collar image. It was a teaching camp, Calipari said. The players cycled through stations where they worked on fundamentals, and the instructors were often luminaries from the coaching world: Hubie Brown, Chuck Daly, Mike Fratello. For them, Five Star was more like a think tank — an opportunity to share ideas and learn from one another.

Games were played on cement courts, and opposing teams typically went shirts and skins. For reasons that were unclear even to those who knew him best, Garfinkel was opposed to the idea of putting numbers on the backs of the players’ T-shirts. It was a unique form of stubbornness that made it difficult for college coaches to identify the prospects they were scouting.

“You’d be like, ‘Garf, you’ve got 400 players here,’” Calipari recalled. “But it didn’t matter. You literally had to go to the scorer to figure out who the hell you were watching: ‘Who’s the kid in the blue shorts?’”

Garfinkel prohibited dunking. Players were celebrated for voluntarily working on their games at “Station 13,” a sort of basketball outpost where the guest clinicians included the likes of Mike Krzyzewski, the men’s coach at Duke. Players paid to attend the camp, and while a select few were awarded scholarships, they earned them by busing tables at mealtime.

“There was something cool about how the best players were serving the other campers,” Hill said. “There was a real life lesson in that.”

Hill was a high school freshman when he secured his long-awaited invitation to Five Star that summer at a small college outside of Pittsburgh. His high school coach handed him a brochure, and Hill studied every word, every photograph. “It was like, ‘Wow,’” he said.

At the time, Amateur Athletic Union basketball was not nearly the colossus that it is today. Instead, Five Star was the hub for up-and-coming players like Hill, whose coach at the camp that summer was a young college assistant named John Calipari.

“From sunup to sundown, it was basketball,” Hill said.

Garfinkel also had a Five Star “Hall of Fame,” which was an extensive collection of newspaper clippings about camp alumni who had graduated to the N.B.A. — players like Jordan, Patrick Ewing and Isiah Thomas — that he would attach to poster boards and hang in a hallway. Whenever Hill had free time, he would read the stories and study the photos and dream.

“There was so much history, and you were starving for content and information,” he said. “It was such a different time.”

A Five Star fixture throughout high school, Hill attended the camp for the final time before the start of his senior year. By then, he had established himself as one of the country’s most prized recruits, with North Carolina and Duke vying to land him. Hill said he was probably leaning toward North Carolina when Garfinkel pulled him aside and told him that he thought Duke was the perfect fit for him.

It was no secret that Garfinkel thought highly of Krzyzewski, and Garfinkel shared his opinion without pressuring Hill, who said he knew that it was his decision. But after visiting Duke three weeks later, he understood that Garfinkel had been right all along. Hill went on to win a pair of national championships at Duke before he became a seven-time N.B.A. All-Star.

The landscape has changed, of course. Youth basketball is big business, and the top players crisscross the country to play in summer tournaments sponsored by sneaker companies. Their highlights are readily available to anyone with a cellphone or an internet connection, and college coaches no longer flock to remote camps in search of undiscovered gems — because there are no undiscovered gems, not anymore.

There is a natural tendency to be nostalgic about the past. Calipari, for example, mourned the loss of basketball instruction in the summer. In that sense, Five Star is a comparative relic.

Still, in his own way, Garfinkel was a folksy precursor to the power brokers — the scouts and the coaches and the sneaker executives — who now wield outsize influence at the grass-roots level. After all, Garfinkel was a businessman, too. He ran his camps and, for many years, sold subscriptions to a scouting report, High School Basketball Illustrated, that he assembled with Tom Konchalski, a close friend who died last year.

In a 2013 interview with The New York Times, Garfinkel said he was troubled by the handful of “bad apples” who were taking advantage of young players for their own financial gain.

“I’m certainly no saint,” he said. “But I can tell you that when it came to basketball, I earned an honest living. I never made a dime sending any player to any school.”

More than anything, Calipari said, Garfinkel was fiercely loyal. A lifelong bachelor, he cared about the coaches and the players who formed his family. Hill said there was an innocence to Five Star, and perhaps that has been lost, too.

“Things have become more sophisticated now, a little more glamorous,” Hill said. “And I’m not saying one is better than the other. But I will say that I’m glad that I played and came through when I did.”

Denial of responsibility! TechiLive.in is an automatic aggregator around the global media. All the content are available free on Internet. We have just arranged it in one platform for educational purpose only. In each content, the hyperlink to the primary source is specified. All trademarks belong to their rightful owners, all materials to their authors. If you are the owner of the content and do not want us to publish your materials on our website, please contact us by email – [email protected]. The content will be deleted within 24 hours.
basketballcampFamersHallhesnews updatesports newssports update
Share