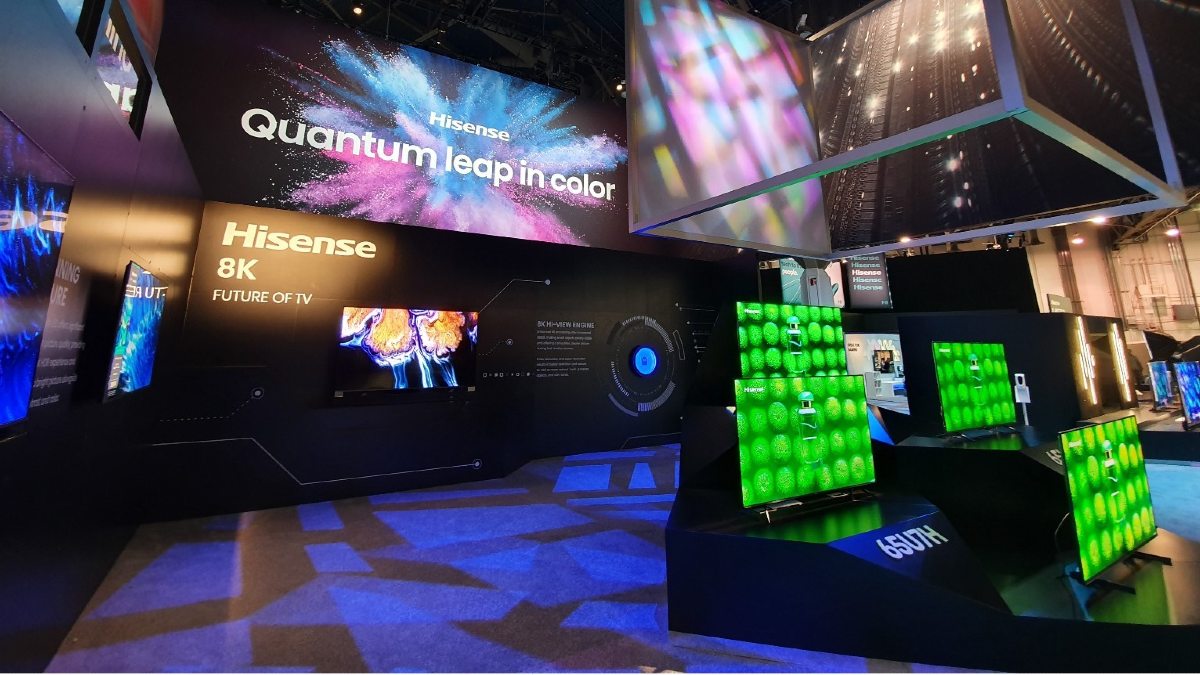 Hisense launched an array of Mini LED and Laser TV models at CES 2022 on Wednesday, January 5. The TV models come in multiple sizes and at varying price points. The Chinese company has expanded its U9H, U8H, U7H, U6H, A7H, A6H, and A4H Series along with its Laser TV lineup (a short-throw projector with the screen included). The new TVs belong to the ULED, Laser TV, and the entry-level smart TV range. All the offerings feature a 4K panel except the A-series models. The highlight is the U9H flagship model, which sports a Mini LED panel and offers quantum dot HDR support.

In a first, Hisense has implemented Mini LED technology into its new flagship U9H series. The Chinese company says that the technology delivers great HDR performance with “a better contrast, brighter images, and impressive colours than ever before”. The latest model in the series comes with a 76-inch 8K ULED Mini LED panel that is claimed to offer 2,000 nits of peak brightness and 1,280 local dimming zones. Other features include auto low-latency mode, quantum dot HDR, 4K gaming at 120Hz refresh rate in Game Mode Pro, and AMD FreeSync support. The TV will be available later this year at $3,200 (roughly Rs. 2,38,000).

Hisense U8H series of televisions also feature a ULED Mini LED panel that is said to offer 1,500 nits of brightness. Other features of TV include Dolby Vision IQ, HDR10+, IMAX Enhanced picture quality support, as well as FilmMaker Mode. The TVs will be available in 55-inch, 65-inch and 75-inch sizes at a starting price of $1,099 (roughly Rs. 81,800) later this year.

Hisense U7H series will be offered in 55-inch, 65-inch, 75-inch, and 85-inch sizes. The TV models do not have Mini LED technology, however, they feature ULED panels, quantum dot technology, AMD FreeSync support, 120Hz refresh rate, and IMAX Enhanced support. Customers can purchase the TVs later this year at a starting price of $800 (roughly Rs. 59,500).

All the above-mentioned ULED TVs will come with Google TV and hands-free voice control.

The Hisense Laser TVs offer Wide Color Gamut to offer true-to-life images reproduction for home theater experience, the company says. They provide a razor-sharp realistic picture for clarity. A Laser TV consists of an ultra-short-throw (UST) projector and wall-mounted screen. The projector throws the light on the screen and display a cinema-like picture with rich and vibrant colours.

Denial of responsibility! TechiLive.in is an automatic aggregator around the global media. All the content are available free on Internet. We have just arranged it in one platform for educational purpose only. In each content, the hyperlink to the primary source is specified. All trademarks belong to their rightful owners, all materials to their authors. If you are the owner of the content and do not want us to publish your materials on our website, please contact us by email – [email protected]. The content will be deleted within 24 hours.
CESCES 2022gadget updateHisensehisense a4hhisense a6hhisense a7hhisense laser tv
Share