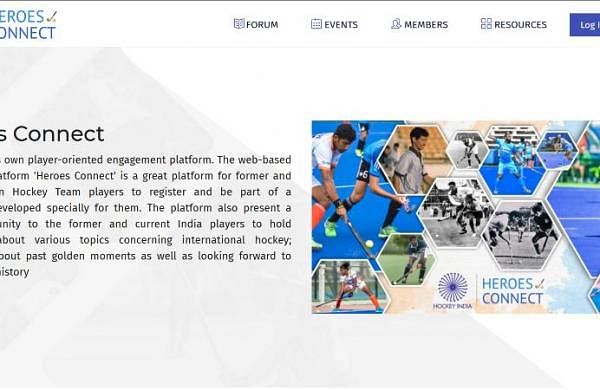 NEW DELHI: Hockey India has launched its own player-oriented web-based engagement platform, the ‘Heroes Connect’ in its bid to curate a detailed database of the players who have represented the country in both men and women’s game.

The unique responsive platform has been designed to encourage former and current Indian hockey players to initiate constructive discussions around the sport.

All the former and current hockey players who have played for India can register their profiles on the platform verified by the national federation.

According to a HI statement, these profiles consist of general details of a player, matches played for the Indian team, duration of career, tournaments played, year of retirement, memorable career moments, awards won, social media profile and photographs of the player.

Former Olympian Sabu Varkey said the ‘Heroes Connect’ platform is a beautiful initiative, which will help him in connecting with his former teammates.

“It’s a beautiful initiative. I am not in touch with many of the players I have played along with, so this is a very good platform, where I can get their contact numbers and connect back with them and speak to them,” he said.

“Recently, I was searching for the contact details of my teammates, and luckily, Hockey India just launched it, so I feel this will help me get in touch with my former teammates, ” said Sabu, who was part of the 1996 Atlanta Olympics squad.

Denial of responsibility! TechiLive.in is an automatic aggregator around the global media. All the content are available free on Internet. We have just arranged it in one platform for educational purpose only. In each content, the hyperlink to the primary source is specified. All trademarks belong to their rightful owners, all materials to their authors. If you are the owner of the content and do not want us to publish your materials on our website, please contact us by email – [email protected]. The content will be deleted within 24 hours.
Loading...
Heroes ConnecthockeyHockey IndiaHockey India Heroes ConnectIndialaunchesnews updatePlatform
0
Share

Cybersecurity lags behind as IoT devices proliferate, according to a new report